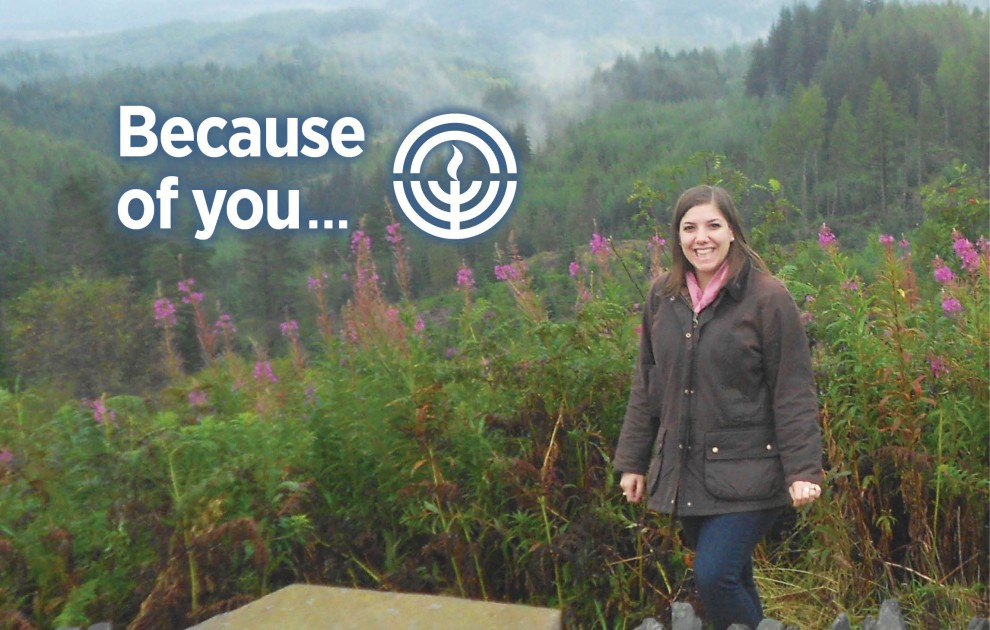 Rebekah’s earliest Jewish memories aren’t the most positive. Her mother converted to marry her father, but was never accepted by his family or their community. After years of being excluded from Passover seders, Rebekah wanted to distance herself from Jewish identity entirely. When she applied for college, she chose a small school with few Jews.

Early in freshman year, a friend dragged Rebekah to a Bagel Break with the Greater Portland Hillel, a Federation beneficiary and partner working at campuses across Portland.  At first, she felt out of place there, intimidated. When she told the Hillel director that she didn’t consider herself Jewish, the director said something that changed her life.

“That was the first time I was ever validated as Jewish,” Rebekah recalls.

Choosing to Be Jewish

Rebekah began to take tentative steps into Jewish life on her own terms at Hillel. Soon, she was living for the deep, intimate conversations at Bagel Breaks and the spiritual uplift of Friday night services. Jewish studies classes came next, where she was inspired by her people’s mission to repair the world and welcome strangers.

Then she went on a Taglit-Birthright Israel trip during her junior year. “It was an amazing experience,” Rebekah says of the Federation-supported initiative. “There, I met with people with similar experiences to mine, a group of people who felt like we could be Jewish even if we didn’t know the words to all the songs.” In short, she belonged.

Shortly after returning, she became a Hillel engagement intern. Now the one leading Bagel Breaks, Rebekah initiated conversations she thought would interest students on the outside, those who maybe didn’t consider themselves “really Jewish.” Before senior year, her Hillel director encouraged her to run for Hillel vice president. She was elected in a landslide.

The Circle of Jewish Life

As she looked ahead to life after college that spring, Rebekah wasn’t really sure what she wanted to pursue next. When her Hillel director suggested she make Jewish engagement a full-time job, Rebekah applied for a position at a Hillel at a heavily-Jewish campus.

She got it after one interview.

Her Jewish journey has come full circle—and it’s just beginning of her trajectory. “Without Federation and Hillel, I wouldn’t have even begun to explore my Jewish identity,” she says. “And here I am now, still learning and growing.”

And now, when she meets students who feel they don’t belong, she smiles and says, “If you want to be Jewish, you can be. If you don’t, you don’t have to.”