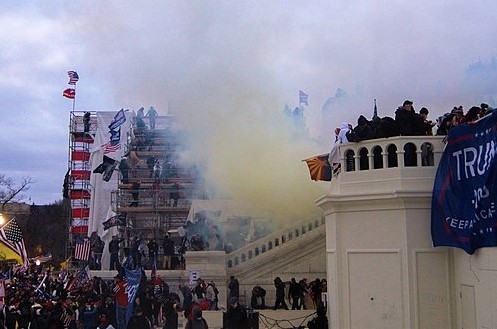 This EXTRA edition of the Jewish Review is designed to create a written memorial of the horrendous events of Jan. 6, 2021. We feel it is important to document the statements and programs from our local Jewish community in the wake of the Jan. 6, 2021, violent insurrection at the United States Capitol Building.

Congressional certification is normally a formality, but on Jan. 6, the proceeding was interrupted for about six hours by a mob that stormed the Capitol and breached its buildings in anger over Trump’s loss in the election.
When lawmakers returned to the Capitol to resume counting and certifying electoral votes to formalize President-elect Joe Biden’s victory in the 2020 election, Senate Minority Leader Chuck Schumer said: “We can now add Jan. 6, 2021, to that very short list of dates in American history that will live forever in infamy.”
He continued: “This temple to democracy was desecrated, its windows smashed, our offices vandalized. The world saw America’s elected officials hurriedly ushered out because they were in harm’s way. The House and Senate floors were places of shelter until the evacuation was ordered, leaving rioters to stalk these hallowed halls. Lawmakers and our staffs, average citizens who love their country, serve it every day, feared for their lives.”