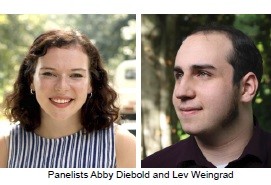 How are our teens doing?
Mel Berwin has been asking herself this question a lot. Particularly throughout January, Mental Health Awareness Month.
She knew that during January, organizations like the Jewish Federation of Greater Portland, Portland Area Jewish Educators, Jewish Family & Child Service, and the Oregon Board of Rabbis were providing potentially life-saving, mental-health information via online resources like panels, Q and A events, and group sessions – all of which were directed to and structured for adults.
“Can we bring programming like this to our teens?” wondered Berwin, Congregation Neveh Shalom’s director of congregational learning. She brought her question to Rachel Nelson, Federation’s director of educational initiatives and inter group outreach.
Berwin and Nelson thoughtfully and quickly created a one-time, teen-only event open to the community. The goal was to  uplift the teens through listening to – and asking questions anonymously of – young adults speaking frankly about their own mental-health challenges. The young adults shared how they successfully cope with, or have coped with, thier challenges.
“The more we can normalize mental-health struggles, the better off we’re going to be as individuals and as a community,” Nelson says.
“It takes something really special to get people online right now,” says Berwin, noting that anyone over-Zoomed is familiar with the on-screen, glazed-over eyes and overuse of the platform’s “video off” option. For the forum event, “The teens’ eyes were glued to the screen,” she says. And their minds to the material.
On Feb. 3, the virtual Teen Mental Wellness Forum drew about 20 teens, four young adults and one psychologist, each in his or her own Zoom box. A parent-free zone, the forum’s only other adult interlopers in addition to Berwin and Nelson were the other community organizers and ALIYAH Tichon teachers.
(A parent-only forum follows March 16. See below.)
Teens in grades 8 through 12 listened intently as young adults Abby Diebold, 23, and Lev Weingrad, 19, both of whom grew up at Neveh Shalom, candidly shared their own experiences with depression, suicidal ideation, and other mental-health challenges. Weingrad is Berwin’s eldest child. He graduated from Wilson High School, renamed Ida B. Wells High School in January.
After the event, Weingrad shared that after some initial hesitation, “I decided to participate... once I realized that I was in a unique position to reach boys who are struggling in school and in life.”
Weingrad, who is no stranger to depression, continued. “It became my goal to speak to the boys whose shoes I was once in not long ago and provide them with a booster of sorts to keep them in the fight.”
He recognizes that pandemic life right now is so hard on young people and that resources may be fewer than those he had.
“I could find some respite by going to my local game store and playing Magic: The Gathering with friends and acquaintances,” says Weingrad, noting the online world was and remains a healthy get-away place, “... something which I recommend to anyone.”
Diebold, now communications director for a Pennsylvania state senator, wanted to emphasize to the teens that depression “can look a lot of different ways,” as did hers.
“You grow up seeing depictions of people with depression who wear a lot of black, don’t go to school, sleep a lot, listen to ‘My Chemical Romance,’” she says, revealing she recognized only in her senior year that she was suffering from what she characterizes as high-functioning depression. She received straight-As, was active in extracurriculars and had a circle of friends.
In addition to depression, she also endured body dysmorphia, high anxiety, and fatigue, and she began to feel like “nothing mattered.”
Weingrad and Diebold both turned to their moms for initial support. Pinpointing and going to a trusted adult is a key step in getting help, says Sophie Riegel, 20, another young adult at the Zoom forum.
The Duke University sophomore has written extensively about mental health and traveled the country to talk about her own experiences as one who has beaten back obsessive-compulsive and panic disorders, anxiety and a condition characterized by pulling out her own hair. Riegel says Weingrad and Diebold did just the right thing in approaching their parents.
But not all teens’ first line of defense is their folks. That’s OK, Riegel emphasizes, as long as you go to someone ready and available to sit in the proverbial poop with you and to help pull you from that pile.
Another teen panelist was Lili Stadler, an intern for the Atlanta-based Blue Dove Foundation. Blue Dove’s mission is to normalize and promote conversation in the Jewish community around difficult issues like substance abuse and mental-health challenges. Stadler says Berwin and Nelson’s program is a first.
Samara Oberlander, one of Neveh Shalom’s educators online, was inspired by the young adults’ stories and appreciated its laser focus on teens. “They saw positive people who’ve been able to overcome big hurdles.”
Duke’s Riegel adds, “The forum’s coordinators clearly understand what teens need, and I really hope others see that teens want to hear from other teens, and I hope, too, that other organizations around the country will really get behind this.”

Parent forum: The kids are not all right

Allan D.A. Cordova, Ph.D., a psychologist with the Portland-based Children’s Program, says, “While I absolutely believe there’s value in professional services and expertise, we also know that peer-to-peer support is incredibly important.”
Now it’s the parents’ turn.
“We want them to hear what the teens heard,” says Federation’s Rachel Nelson of the Feb. 3 Teen Mental Wellness Forum. Cordova, Nelson and Mel Berwin of Neveh Shalom want the parents to learn, for example, how they might start a conversation with their teen about mental health and how to elicit more from their child than, say, “I’m fine,” especially when they are really hurting.
This 6 pm, March 16 session on Zoom is intended for parents of teens. Parents are invited to listen to and ask questions of many of the Teen Forum’s panelists, including Cordova and young adults Lev Weingrad, Abby Diebold and Lili Stadler. The program is sponsored by the Jewish Federation of Greater Portland and Jewish Family & Child Service.
Register at jewishportland.org/teenmentalwellness.
For more information on the program, contact Mel Berwin at mberwin@nevehshalom.org.

• Attend to your own mental health and well-being. This helps you serve as the best possible role model for your teen and helps you be stronger to support your teen.
• Watch out for your OWN avoidance and withdrawal behaviors. When our teens pull away, we may tend to do the same. These kinds of behaviors might include regularly drinking or using substances (if you feel like you really “need” it, it’s a good idea to skip it); using your phone or computer excessively or reflexively; and retreating more into work.
• Look for small wins and take advantage of openings. For example, your teen wanting to show you a funny TikTok or post could be a small win – it represents them sharing their world with you. Other wins could be joining you for a meal, sharing their frustration about distance learning or walking around the block with you.
• Don’t underestimate the power of a change of scenery. Get out for a drive together (let your teen drive if they are a learner or licensed) or walk to get ice cream or coffee. Anything that can get you out of the house together can have a noticeable impact on mood and energy.
• Be transparent with teens. Say something like, “I think you might find this annoying, but I really need you to know I’m here and that I care. So, I want us to come up with a plan to stay more connected and have a little more fun together.”
~ Allan D.A. Cordova, psychologist