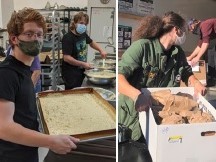 PHOTOS: Instead of feeding campers, the BB Camp kitchen staff is preparing meals that are delivered to feed hungry children and wildfire evacuees.

Feeding the hungry has been a triple mitzvah for B’nai B’rith Camp during this year when COVID and wildfires upended life and forced the camp to reimagine its mission.
“First, we are living our Jewish values, doing tikkun olam by feeding our community,” says BB Camp Executive Director Michelle Koplan. “Second, our federal and state governments have assisted in funding these projects during the pandemic, which has helped in our agency’s sustainability. The third mitzvah – the feeding programs have allowed me to continue to keep six of my kitchen and maintenance staff employed, which in turn has allowed them to feed their families.”
Due to the pandemic and the increased need to feed families during this crisis, BB Camp has served more than 45,000 Free Grab & Go Meals to food-insecure and hungry children near the camp’s Lincoln County campground since June. They will continue to serve meals to the community’s children through August 2021. Breakfast and lunch for three and four days at a time are available for pickup two days a week at BB Camp and are delivered to several local apartment complexes served by NW Coastal Housing.
In addition, BB Camp delivers three delicious and nutritious free meals seven days a week to nine emergency shelters to feed more than 300 evacuees from the Echo Mountain Complex Wildfire. By the end of October, BB Camp had served nearly 15,000 free meals to evacuees; that effort is expected to continue through March 2021.
The youth meals program is funded through the USDA Summer Food Services Program, which the USDA has extended through August 2021. The wildfire evacuee feeding program started as an American Red Cross-funded program and then transitioned to state and FEMA funding.
The feeding programs are just part of BB Camp’s pivot.
“The financial implications of the Governor’s mandated closing of overnight camps are profound for our agency,” says Michelle, noting the camp lost $2.2 million in revenue. “Despite the closure of our overnight campus, our BB Camp staff and lay leadership pivoted, creatively adapted and persevered – using Jewish values as our guide. Under these unprecedented circumstances, I am in awe of the resilient, new and forward-thinking approaches to programming that BB Camp provided the community this past summer.”
In addition to the meal programs, BB Camp served 613 campers in four day camp programs in Portland, Lincoln City and Seattle; 1,937 people via virtual programs; and 229 Men’s Campers and guests on a Zoom program that ended the summer season. BB Camp also finished construction of ADA-accessible cabins on the north side of the camp located on Devil’s Lake.
“Less than a week after our last summer event, the historic straight-line windstorm and Echo Mountain Complex Wildfire hit our local area,” says Michelle. “The wildfire was dangerously close to BB Camp. Staff were evacuated without warning.  …  BB Camp was spared. Unfortunately, many of our neighbors and friends were not as lucky.”
Though BB Camp was unable to provide the free meals for children during the evacuation, the staff redoubled their efforts after returning to camp. BB Camp Food Services Chef Becci Bazen oversees the program and prepares the meals with two kitchen staff members. The team now prepares meals for the evacuees as well as more than 200 children.