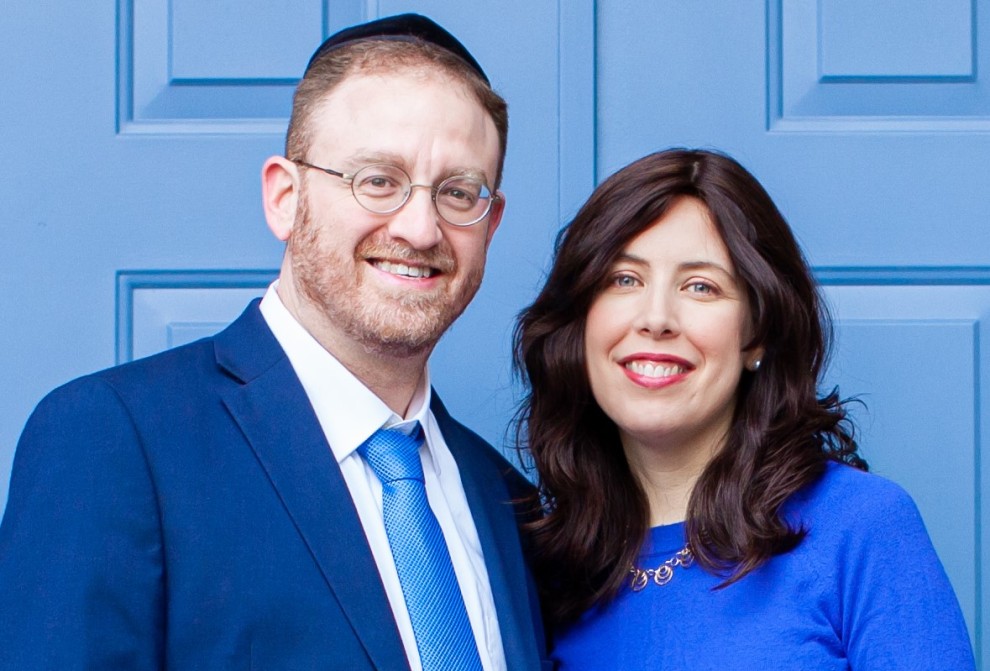 BY DEBORAH MOON
Congregation Kesser Israel invites the community to help celebrate the contributions and vibrancy Rabbi Kenneth and Aviel Brodkin have shared with the local Jewish community during their 17 years in Portland.
Before the couple moves to take on fresh challenges at a new congregation in New Jersey, Kesser Israel has planned a June 19 farewell celebration that is open to all (see details below).
“The greater Portland Jewish community will sorely miss the energy and commitment of Rabbi and Aviel,” says Jewish Federation of Greater Portland President and CEO Marc Blattner. “They were tremendous assets to Kesser Israel, Maayan Torah and the overall Jewish community. Our loss is central New Jersey’s gain.”

Since their arrival in Portland in 2005, the couple helped Kesser move into a new home in the heart of the local Jewish community. The rabbi reinvigorated the daily minyans, which now consistently meet three times a day, ensuring there is always someplace for Portlanders and visitors to say kaddish or start and end their day with a prayer minyan. The rebbetzin has created and led extensive programs and classes for women and children, served as a parenting coach and created a manna pantry, where families in need can find kosher meat to supplement the foods they can get at a community food pantry.
“At our very first encounter, before the Brodkins were hired, I had the chutzpah to say that we need total commitment to leading and building the kehillah,” says Aki Flesher, a past president and longtime member of Kesser. “I can honestly say they met and even exceeded the challenge!”
The rebbetzin believes that having a young rabbi and his family move to Portland helped move a congregation rich in history into its second 100 years. She says she especially enjoyed working with architects and artists to design the Orthodox congregation’s new space on Capitol Highway.
“It’s smaller, but rich with flavor,” says Mrs. Brodkin. “I love davening here.”
The congregation ran a successful “burn the mortgage” campaign for the new shul in Southwest Portland.
Rabbi Brodkin describes burning the mortgage as more than a financial campaign. “It was more than the money raised – it was the feeling of momentum, of moving forward.”
It was a followed by a capital campaign to expand the shul.
“I wanted to see us complete the building here – a community needs a proper building,” says Rabbi Brodkin of one of his regrets about leaving Portland now. But the pandemic and Portland’s permitting process slowed that effort. “No one can accomplish everything. I believe it is going to happen.”

Their efforts have extended well beyond the congregation.
“The Brodkins have never limited their classes or programs to just the Kesser congregation,” says Miriam Lambert, who is chairing the farewell dinner. “I believe they have helped the whole Jewish community of Portland grow, and I think there are lots of folks who will appreciate the chance to celebrate them and say goodbye.”
The couple was instrumental in establishing Maayan Torah Day School in 2011, with Mrs. Brodkin serving as the principal for the school’s first 11 years, and Rabbi Brodkin serving as rabbinic dean throughout. Rabbi Brodkin says Aviel “really created the program. She had the educational vision, she knows what children need.”
Rabbi Brodkin notes that Maayan appeals to a mix of people, some affiliated with Kesser or other parts of the community and some not. He says it has been gratifying to see the broad support of the school – including individuals, Congregation Neveh Shalom (which rented space to the school for its first several years) and the Jewish Federation (which helped the school raise the funds to lease a long-term home in Lake Oswego).
“Maayan is my most significant contribution to the community,” says Mrs. Brodkin.
“Rabbi Ken and Aviel created Maayan out of a need they saw, and in the process made a robust educational institution that rivals schools much greater in size with better resources,” says Rabbi Yerachmiel Kalter, now Maayan’s principal. “The educational foundation that Mrs. Brodkin established at Maayan has brought students to success in high school, college and beyond.”
He adds that Maayan is just part of the couple’s contribution: “The amount of communal responsibility the Brodkins have shouldered is unparalleled. The vision they brought to see the short-term and long-term needs, to step forward into the voids and fill them, to work to make a brighter future for Portland’s Jewish community is astounding.”

Over the years, the couple’s efforts have helped make Portland an attractive destination for Orthodox families and have changed the way the broader community views Orthodox Judaism.
“We have been able to help people view the Orthodox community as a vital part of Jewish Portland,” says the rabbi. “We could not have launched Maayan without community support … and that support came from the recognition of how important this community is.”
In addition to establishing Maayan Torah, Rabbi Brodkin was a wholehearted, vocal supporter of a community mikvah. He says he played a supportive role alongside the Portland Kollel, community rabbis and the Federation to bring Rachel’s Well Community Mikvah to the nearby Schnitzer Family Campus, also home to the Mittleman Jewish Community Center. He also has supported the Kollel as it expanded Oregon Kosher and established an eruv (ritual boundary) in Portland.
Mrs. Brodkin says those efforts, combined with a Torah day school, have enabled observant families to consider Portland a destination. She says Portland’s different social values and resources make it a nice option for families wanting something with a different vibe than the long-established Orthodox communities on the East Coast and California.
In the past, many observant young adults moved away from Portland for college and marriage. But over the past decade, many have returned to their hometown to raise their families.
“The founding of Maayan has led to a renaissance of young families moving to Portland, as now they had a traditional Torah Day school to send to,” says Rabbi Kalter.
Jodi (Meyerowitz) Fried’s family moved to Portland when she was 10. She moved away as a young adult but returned in 2015. Jodi worked in Kesser’s office for five years when she returned. Now she and her husband have four children at Maayan Torah.
“The Brodkins, working together with other leaders in the community, paved the way for observant families like mine to move to, and move back to, Portland,” says Jodi. “For some, a daily minyan, three times per day, is critical, and for others Portland would not be a viable option without a school like Maayan. It’s also easy to lose sight now of how critical it was for the community to move Kesser from Meade Street in Old South Portland to the heart of the Jewish community in the Southwest – a move the Brodkins took from vision to reality. Without the foundation that the Brodkins helped to lay, my family would likely not have moved back to Portland. This foundation, will, please G-d, benefit the community of Portland for years to come.”
The Brodkins both believe Kesser, the Orthodox community and Maayan Torah have strong leadership going forward and are poised for continued growth.

WHY: Celebrate Rabbi Kenneth and Aviel Brodkin’s 17 years of service to Congregation Kesser Israel, Maayan Torah Day School and the greater Portland Jewish community
WHEN: 5:30-8:30 pm, June 19
WHERE: Mittleman Jewish Community Center
CHILDCARE: Ages 2-12, 6-8:30 pm (complimentary but reservations required)
COST: Suggested donation for dinner: $36/person; $72/family max
REGISTER: Dinner and childcare registration due June 7 at kesserisrael.org/form/brodkindinner
TRIBUTES: Submit a short video tribute and a message with a picture for a keepsake book by May 30 (be sure to include your name). kesserisrael.org/brodkintribute