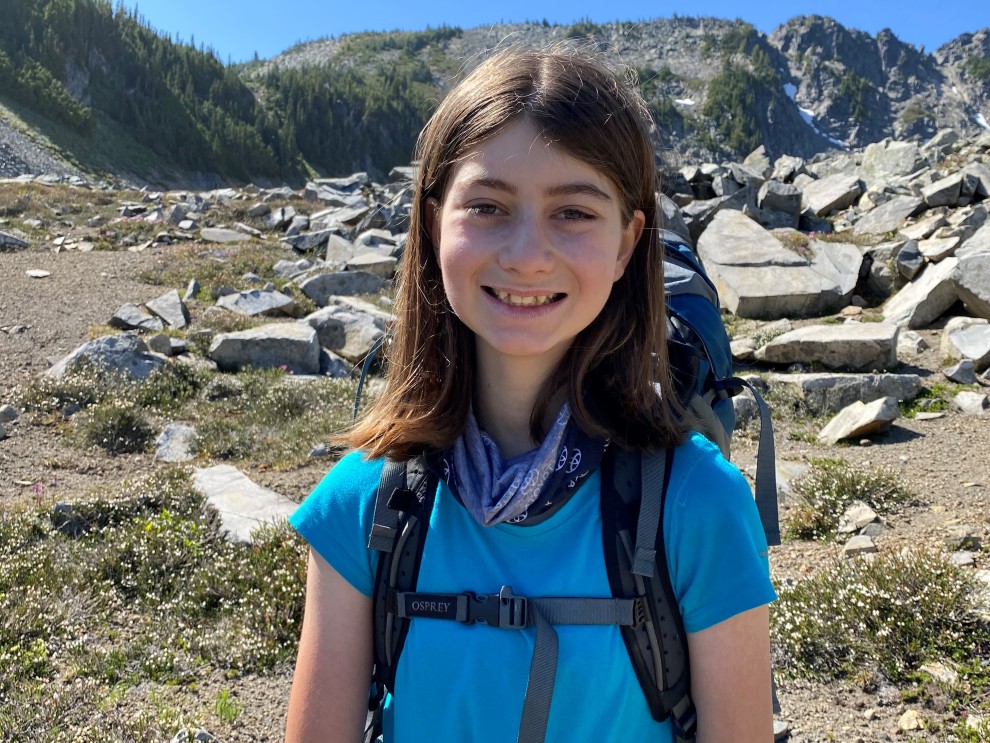 All three students were in Holly Walsh’s eighth-grade English class this past school year.
“Donnie, Abby and Eliza are each phenomenal students who beautifully express the depth of their empathy through their words,” says Holly. “Their voices encourage others to embrace ambiguity and seek commonality rather than difference.”
The Seattle Center’s Writing, Art and Film Contest challenges students to explore the history and stories of the Holocaust and to consider how individual actions, big and small, make a difference. The annual contest is open to students in grades 5-12 from Washington, Oregon, Idaho, Montana and Alaska.
Abby won the 7th/8th grade writing contest with “A Poem in Two Voices.” The poem, parts of which were taken from the life of Vera Federman, follows the chillingly different trajectories of life for a Jewish and German girl in alternating stanzas.
Abby became a bat mitzvah at Congregation Beth Israel. She attended Portland Jewish Academy from first to fifth grades. Until this year, each summer since second grade she has gone to Shwayder Camp, a sleep away camp in the mountains of Colorado owned by Temple Emanuel, Denver.
Donald’s short story “The Snow Swirls,” set in Stuttgart, Germany, Dec. 29, 1942, won second in the same category. His story shows a moment of compassion from a German soldier toward a young Jewish boy who smiles at him.
“We have included Holocaust education as part of our 8th-grade curriculum for the past 16 years I’ve taught at Catlin Gabel School,” says Holly. “Students learn about the Holocaust through reading nonfiction historical writings as well as through the novel  by Markus Zusak. By studying these historical times, plus creative writing, students naturally draw parallels to our world today. These parallels ignite agency in students, and when I encourage them to submit to writing contests, their responses are quite powerful.”
To read Abby and Donald’s winning entries, click on their names in the winners’ list at: holocaustcenterseattle.org/programs-events/writing-art-film-contest
“I am incredibly thankful for the Holocaust Center for Humanity and Oregon Jewish Museum and Center for Holocaust Education for providing young people a greater audience for their heartfelt ideas,” says Holly.
The Seattle center is planning an online presentation to showcase winners' entries.