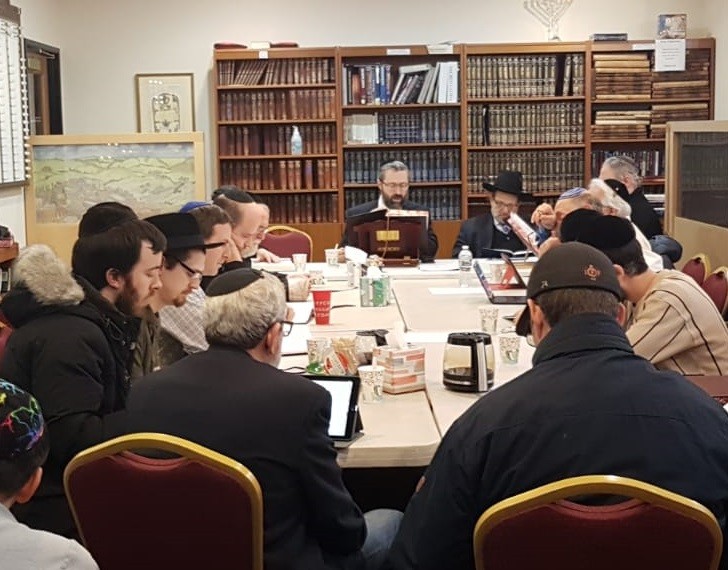 A couple dozen students gathered at the Portland Kollel March 7 to celebrate completing the first of 63 tractates that they will study, a page a day, until they complete the 2,711 pages that make up the Talmud.
In the previous 7½ year cycle, which ended Jan. 4, 2020, the New York Times estimated some 350,000 people participated in the Daf Yomi (page a day) movement. Each day, participants around the world study the same two-sided page of the Talmud, which serves as the primary source of Jewish religious law and Jewish theology.
“I’ve heard that the last cycle was 350,000, and that this cycle has grown exponentially,” says Portland Kollel Director Rabbi Tzvi Fischer, who teaches a Daf Yomi class every morning. “However, the numbers are not in yet as to how many globally.  I believe over 50 locals are doing it.”
The New Year’s Day Siyum HaShas at New York’s MetLife Stadium drew some 90,000 people to celebrate the completion of the last cycle.

The new cycle began Jan. 5, 2020.“I think the publicity that the Siyum at MetLife Stadium received created the awareness,” says Rabbi Fischer. “However, I think the online resources, the smartphone apps, social media group encouragement and the availability of the Artscroll Schottenstien English edition have all been a game changer for access to this monumental work of our people.”
During the last cycle, about 10 people participated in the Kollel’s daily class. This year, about 30 people (pre-pandemic) were studying in either Rabbi Fischer’s morning class at Kesser Israel or Rabbi Shalom Skolnik’s evening class at the Kollel. Others receive the page on their cell phones or via email and study alone or with a partner.
Jodi Garber-Simon, who is participating in this Daf Yomi cycle with her husband, Neil Simon, says she was interested in starting Daf Yomi several years ago, but it was the middle of the cycle and she dismissed the idea. “This year, when I learned the cycle was beginning again, I decided to sign up for a daily email,” says Jodi. “I’m only reading a summary of each day’s page, but it’s been very interesting. Some days, I find a bigger lesson that I can apply to life, and other days I laugh at the attention paid to minutiae of life. We will see if I make it all seven years, but so far, I’ve enjoyed this daily habit of learning.”
For information on virtual classes, call the Portland Kollel at 503-245-5420.