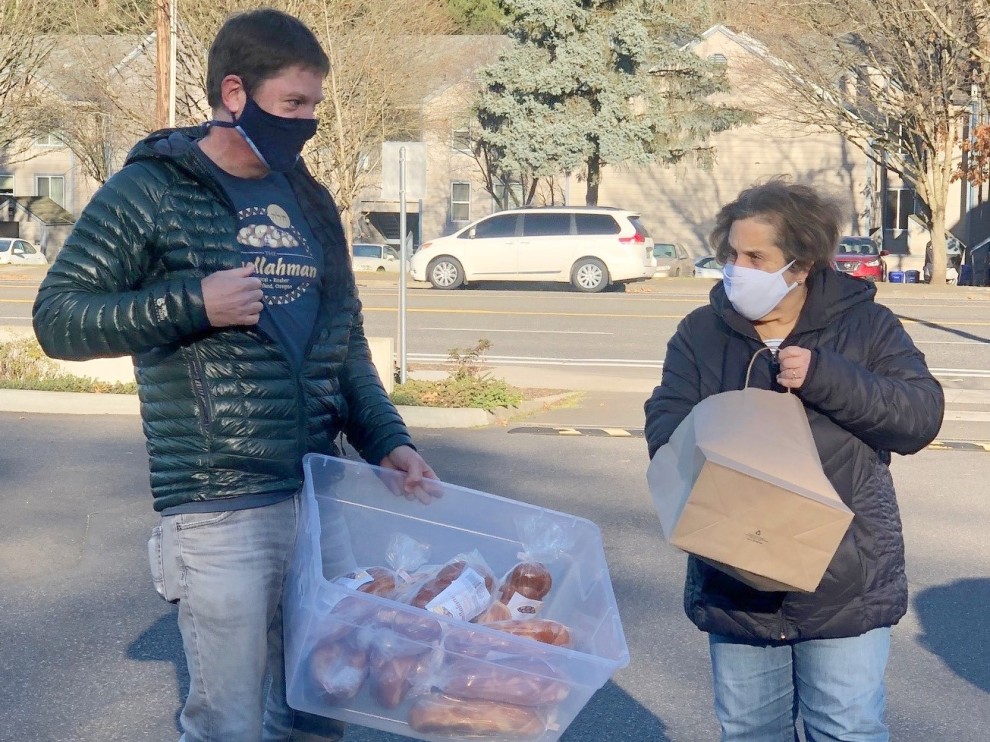 PHOTO: Challahman Rich Meyer brings a bin of challah loaves to Janet Menashe to deliver to Kehillah residents. For every two loaves sold, one more is donated to Jewish Family & Child Service. Each week about 75 Holocaust survivors, clients with special needs  and other JFCS clients get a fresh loaf of challah for Shabbat.

BY JENN DIRECTOR KNUDSEN
How many loaves of challah did the following ingredients make?
750 pounds of flour
85 pounds of sugar
70 dozen eggs
6 quarts of vanilla
10 pounds of salt
7 gallons of oil.
If you answered in the ballpark of 1,600 challah loaves, you’re right.
That’s the number of loaves of bread for Shabbat that Rich Meyer, the mind and baker behind The Challahman – “Portland’s tastiest kosher challah,” according to its website – has donated to Jewish Family & Child Service since last spring.
It was then that Meyer – one of about 100 Jewish community members – placed calls on behalf of the Jewish Federation of Greater Portland to check in on people and ask how they’d been doing. The pandemic and lockdown were new then, and people shared with Meyer they had begun to feel rather sad and isolated.
“We’re part of a community and this is a very difficult time, and I feel very fortunate to be healthy and be able to get around,” Meyer says. The stories people told him put others’ situations in perspective, particularly the most vulnerable among us.
“Especially those who lived and survived the Holocaust, and now they’re near the tail end of their lives having to live through just this awful thing,” he says of the pandemic and its social fallout. “It occurred to me: all these people are just shut in; they can’t see anyone.”
But he could at least help them usher in Shabbat with an edible piece of love and support. So he contacted JFCS, a partnership was formed and Meyer got to baking.
He’d founded The Challahman in 2012, but last March needed to shut down his operation for distribution issues.
“I’d wondered if I could restart my business and also help the community simultaneously,” he says. His model is to charge a bit more per loaf for regular customers to help offset the cost of those he donates. As his website specifies, for every two loaves purchased, a third is donated to JFCS.
Holocaust Survivor Services Manager Kim VanKoten shares what the challah has meant to one survivor. The 82-year-old survivor told her, “I want to thank you for the delicious meals and challah and all you are doing for us in this difficult time. You are doing everything you can to make our lives easier!”
Every Friday, Meyer drives to a Gresham-based facility where JFCS clients’ meals are assembled and drops off up to 60 loaves to be delivered around town.
VanKoten says, “Clients have mentioned they are very grateful for the meals and the challah for Shabbat, that such deliveries help them stay safe in their homes.”
Holocaust survivors aren’t the only JFCS clients who receive weekly Challahman loaves. Disabilities Inclusion Specialist Janet Menashe thought the bread could give Kehillah residents a brighter and heartier Shabbat. Located at Cedar Sinai Park, Kehillah is independent, affordable housing for adults with developmental disabilities.
Now Menashe distributes up to 15 loaves to Kehillah House residents and a few clients around town. Her rounds include a gentleman in his 40s. “I take him the challah each Friday,” she says. “He looks very much forward to getting the challah since it is so good, but he also enjoys our talks each Friday because he is feeling isolated.”
Meyer said he plans to offer his challot for as long as this pandemic drags on. Even if it’s another 1,600 loaves, or more.
“I’m happy to play a small role to brighten up their weeks,” says Meyer.
To order two of your own loaves to benefit a JFCS client, visit challahman.com.

Holocaust Remembrance events
March 31: Musical tribute (see story below)
April 7: Yom HaShoah will be observed virtually with a short service led by Oregon Board of Rabbis at 7 pm with Holocaust survivors and their descendants via Zoom.
April 8: Reading of the Names. Community members, elected officials and survivors will read the names inscribed on the Oregon Holocaust Memorial in Washington Park. The event will be livestreamed and recorded.
These events are part of a series recognizing Genocide Awareness and Prevention Month. The series is co-sponsored by The Immigrant Story, Oregon Historical Society, OJMCHE, PSU Holocaust and Genocide Project, Never Again Coalition and WorldOregon.
Details/registration: ojmche.org/calendar/

The Oregon Jewish Museum and Center for Holocaust Education and Jewish Family & Child Service present a 7 pm, March 31, Zoom-based musical tribute in honor of Yom HaShoah, Holocaust Remembrance Day.
Rich with music and meaning, the free evening event features Chamber Music Northwest musicians playing pieces composed by those imprisoned and murdered during the Holocaust. The musical interlude portion of the event includes a piece for cello composed by James Simon, who perished in the gas chambers of Auschwitz in 1944, following his internment at Theresienstadt. There will also be a movement for clarinet, violin and cello by Olivier Eugène Prosper Charles Messiaen of France, considered one of the major composers of the 20th century. He composed “Quartet for the End of Time” while a political prisoner in Germany.
Following the musical program, Holocaust survivor Ruth Bolliger, a member of OJMCHE’s speakers’ bureau, will be in conversation with Amanda Coven, OJMCHE’s director of education. Born in 1938 in then-Czechoslovakia, infant Ruth and her family escaped to Belgium, then France, followed by England, before arriving in New York City in 1941. Bolliger later moved to Oregon, settling in Portland in 1975.