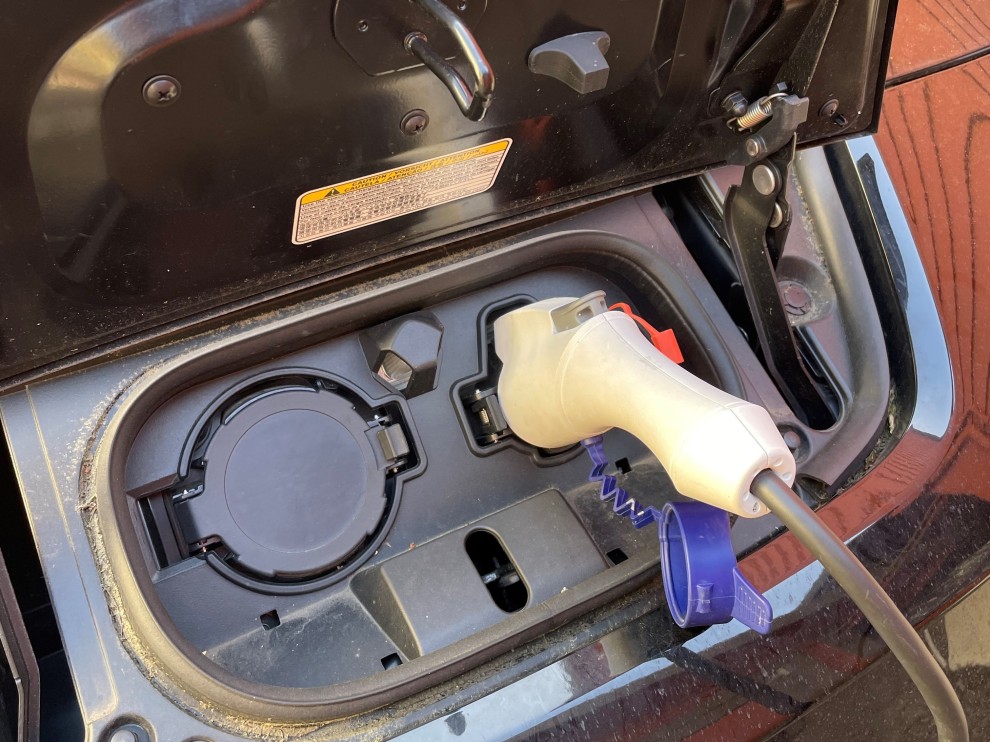 PHOTO: Josh Lake plugs his Nissan Leaf in for a fresh charge at home. But when he's out and needs a boost for his battery, he has to find an EV charging station. The Climate Action Committee, which Josh chairs, hopes to bring that option to Jewish agencies and synagogues.

Josh Lake, the new chair of the Climate Action Committee of the Jewish Community Relations Council, is leading a four-pronged approach to battling what he calls “the marquee issue of our generation.”
The committee was created in September 2019 to “inspire, educate and mobilize our Jewish community to protect our planet from the negative impacts of climate change.”
Josh is an outdoor Jewish adventure professional and was a panelist for the committee’s inaugural event in December 2019, “Is Climate Change a Jewish Issue?” He took on the role of committee chair a year later.
Now Josh has formed four subcommittees to address the issue. The infrastructure group is exploring the potential to install EV charging stations at synagogues and Jewish agencies. The other three subcommittees – policy, congregation relations and education/programming – are in formation. One arose after Josh met with the Oregon Board of Rabbis, who requested suggestions on how to educate their members about climate actions. The programming/education group will take on future programs such as the Earth Day program developed by the full committee. (See story below.)
“Despite the threat climate change presents, misinformation surrounding the issue of climate change is abundant,” says Josh. “Our program, ‘Dispelling the Myths Around Climate Change,’ is designed to raise a warning flag about climate change.”
Of the four-pronged approach, Josh says, “I want us to be robust. I want us to be leaders creating community action that is impactful on climate change.”
He is especially excited about the idea of placing charging stations for electric vehicles at the Mittleman Jewish Community Center. While the center doesn’t have the budget to buy the charging stations, Josh hopes to find donors who would donate chargers and create a revenue stream for the center from people paying to charge their vehicles.
“If it’s a high-speed station, people can get a 5 to 10 percent charge while working out at the J,” says Josh, adding he typically pays $1.50 to $2 to plug into a station. With electric vehicles increasing in popularity, the demand for charging stations will only grow.
“We can green the facility while greening their pocketbooks also,” he says. “If it’s a successful model at the J, we could do it with other
agencies and synagogues.”
Josh says organizations typically lack personnel to explore the option for their facility. So the subcommittee is researching logistics and costs (both initial and upkeep).
“We are a group of volunteers committed to the environment, and we have time and the willingness to learn,” says Josh. The plan is to take that research to organizations that might benefit from having charging stations in their parking lots.
“We had a perfect world until we started mucking it up through oil spills and tailpipe exhaust,” says Josh. “We can help fix it – literal tikkun olam – with EV stations.”
Josh also hopes to reach out to other faith communities to work collaboratively on climate change.
“Earth is really a holy vessel that holds all of us,” he says.
For details or to get involved, visit jewishportland.org/ourcommunity/climate-action-committee or contact Jewish Federation of Greater Portland Community Relations Director Bob Horenstein at bob@jewishportland.org or 503-245-6496.

Dispelling climate change myths April 22
The Jewish Federation of Greater Portland presents “Dispelling the Myths Around Climate Change” on Earth Day 2021.
“Climate change is the marquee issue of our generation,” says Josh Lake, chair of the Climate Action Committee, part of Federation’s Jewish Community Relations Council. “If we are not successful in mitigating climate change, our descendants (our children’s children) will need to look for a new planet. Our children will not judge us by the amount of money we leave them, but by the health of the planet we leave them, and so far we have not done a good job on leaving them a healthy planet.”
More than 1 billion people in 192 countries now participate in Earth Day activities each year, according to earthday.org, which grew out of the first Earth Day April 22, 1970.
Portland’s Climate Action Committee hosts Kierán Suckling, a founder and executive director of the Center for Biological Diversity, and state legislator Andrea Salinas on Zoom 7-8:30 pm, April 22. Josh expects Kierán, a longtime friend, to shed light on the interconnection of climate change and biological diversity. Rep. Salinas is a sponsor of the state resolution urging the Biden administration to take bold action on climate change.
Register: jewishportland.org/climatechange