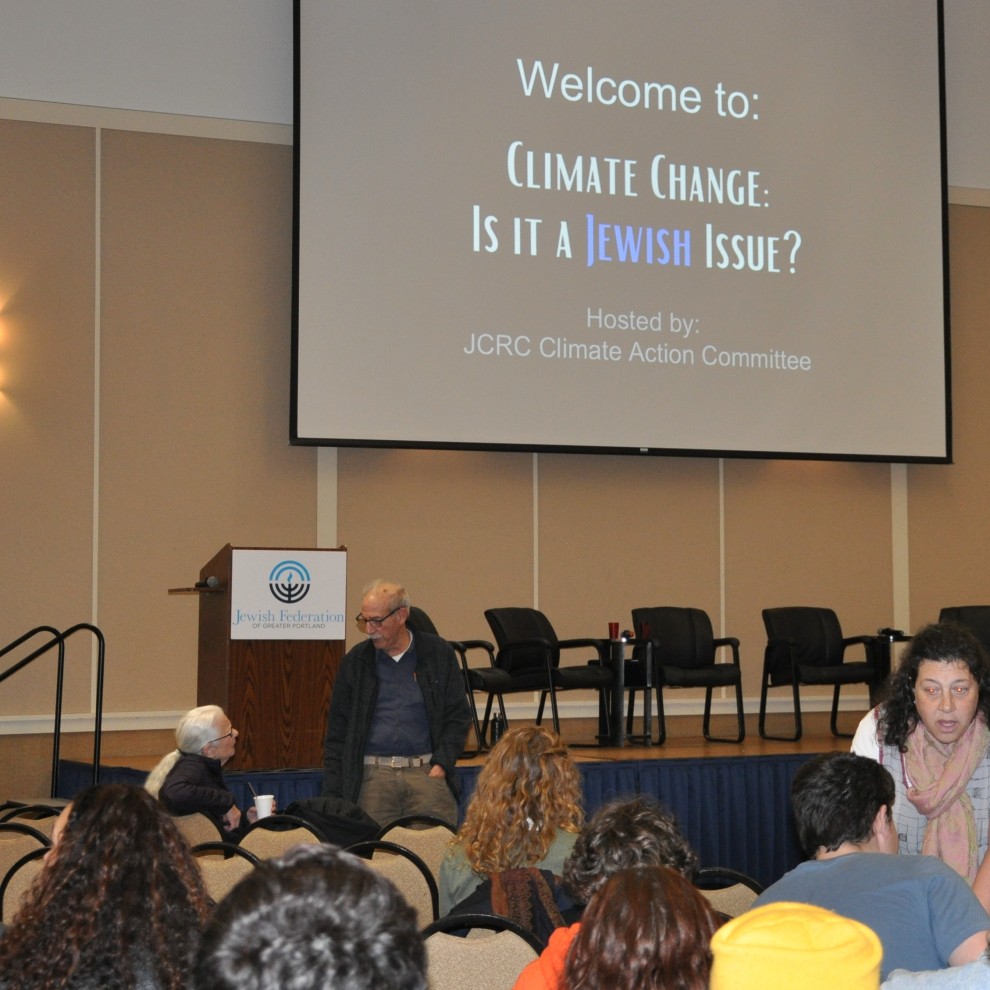 Following its December kickoff event, “Is Climate Change a Jewish Issue?,” the new Climate Action Committee of the Jewish Community Relations Council has developed an informative website and signed on to cosponsor the April Climate Change Fair (see below).

While the broad cross section of JCRC members generally address challenges facing the future of the Jewish community, this new committee recognizes that climate change is “a threat to every human being on the planet … and too many of us still don’t understand the urgency of the threat,” said JCRC Director Robert Horenstein.

After Willey presented an overview of the threats of climate change, Rabbi Fischer discussed the Jewish responsibility to counter those threats. The Torah’s narrative of creation tells us “God created a world that is sufficient and efficient … We are the custodians.”

Rabbi Kosak echoed that view, noting, “In Torah there is a deep understanding that we belong to the earth; the earth does not belong to us.”

Lake added, “If we don’t fix it, there will be no Judaism, no Christianity, no Islam. It is everyone’s issue.”

You don’t have to be an environmentalist or even fully believe the science to realize it is prudent to try to limit greenhouse gases. Lake compared working to counter climate change to putting on a seatbelt when you get in the car: “You don’t expect to crash, but you want to mitigate the possibility.”

Noting he doesn’t consider himself an environmentalist, Rabbi Fischer said he still takes small, personal actions for the planet’s health such as choosing to walk rather than drive when possible.

Willey offered other simple steps to help: buy in glass when you can; use a metal fork instead of plastic; turn your heat down 2 degrees.

The committee’s website jewishportland.org/ourcommunity/climate-action-committee offers resources including: What can one person do, today? How can I get more involved? What is the Jewish perspective?

Willey spearheaded the new committee after participating in a cohort of PDX Pathways, which gives young professionals a networking, mentorship and Jewish community involvement experience. When she moved to California for a new job, Hanna Wolff, a resident of Moishe House, took over as committee chair.

A Climate Action Fair and Celebration honoring the 50th Anniversary of Earth Day will be held at 1-5 pm, April 19, 2020, at the Mittleman Jewish Community Center. This community-wide event is co-sponsored by several Jewish congregations and the JCRC.

Attendees from across the community will come together to meet with numerous local environmental organizations and service providers to learn about the climate crisis and how to get involved in meaningful actions. Ideas to make a meaningful difference will be offered for individuals, families and congregations along with information about larger regional efforts.

This family-friendly event will feature a panel sharing Oregon-specific efforts to address climate change, tabling by the various organizations and activities to engage children.