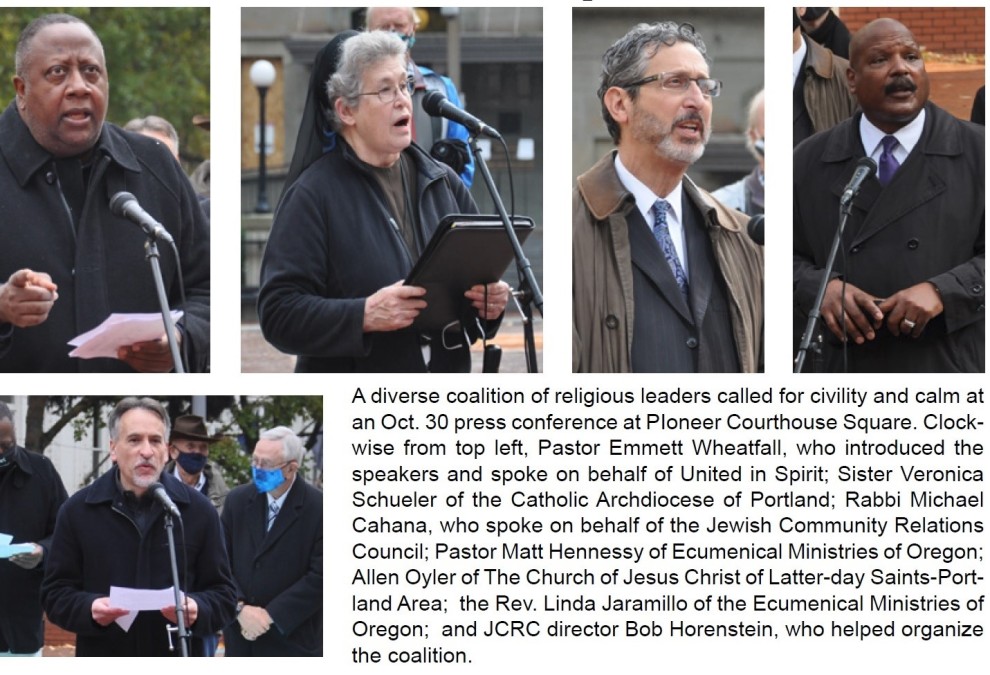 Religious leaders from many faiths gathered in Pioneer Courthouse Square on Oct. 30 to call for peace and civility around the Nov. 3 election. On Nov. 5, coalition members met (virtually) to consider how they might further that goal.
The call for peace was issued by 17 organizations and spearheaded by United in Spirit, a Portland-based coalition reinvigorating the historically positive relationship between the African-American and Jewish communities. Since election day and resulting protests, the signatories plan to reach out to other religious groups including the Muslim community to expand the already broad-based coalition.
“We are trying to find our niche (to promote peace and civility),” says Community Relations Director Bob Horenstein of the Jewish Federation of Greater Portland. The JCRC is a key organizer of United in Spirit. “One area we thought we might make an impact is to support the downtown business community.”
Some of the protests in Portland tipped to vandalism and violence in the past week. A unified command of law enforcement arranged by Gov. Kate Brown – with the Multnomah County Sheriff’s Office and Oregon State Police in charge – declared a Nov. 4 demonstration a riot.
“Law enforcement and public safety personnel are doing what they can to prepare for and mitigate the effects of criminal behavior that has been exhibited downtown,” says Regional Security Director Gene Moss, who is based at the JFGP. He notes that on Nov.4 there were two groups downtown – “one group of peaceful protesters demonstrating to say every vote needs to be counted, and another who were there to steal, damage property and riot.”
He adds that in conversations with local law enforcement, he has heard that most of the criminal activity is being propagated by “anarchists” who have joined otherwise peaceful marches. “The people protesting peacefully are being overshadowed by the anarchist element that is hiding in the shadows.”
Moss praised the coalition for the good work they are doing “to try to bring civility and cohesion to our community.”
Two local television stations, KOIN and KPTV, and radio station KXL FM 101 covered a press conference at which leaders called for peace. Following is the full text of the plea for civility, which signatories still hope will hold some sway with protesters.
Call for Peace and Civility
There comes a time when people of goodwill, whether nationally or locally, must reach out to their fellow citizens. Now is that time. We believe it is urgent that the City of Portland, Oregon, and surrounding communities heed a specific and public call for peace, calm and civility.
We fully acknowledge the peaceful protests calling for long overdue racial and social justice. At the same time, we continue to witness the persistent political and social unrest occurring in the United States, especially in our beloved City of Portland (affectionately, the City of Roses). We are also deeply concerned about the divisiveness and potential for violence around the upcoming elections. Wherefore, United in Spirit, in conjunction with other community-based organizations and social justice advocates, issues a clarion call and appeal for peace and civility.
United in Spirit, along with our allied organizations, asks for the immediate cessation of violence and destruction of property. While we acknowledge that the destruction of property is of secondary concern to violence against people, we condemn all forms of violence. Our appeal is for civil discourse. We ask every person of goodwill to pursue conciliation rather than polarization. Let peace and civility return to the City of Portland and the metropolitan area.
United in Spirit: Coalition of the Jewish Federation of Greater Portland, NAACP-Portland Chapter, Oregon Jewish Museum and Center for Holocaust Education, Dialogues Unlimited, LLC and Remember the Hope Christian Fellowship.
Allied Organizations: Catholic Archdiocese of Portland, Chabad of Oregon, The Church of Jesus Christ of Latter-day Saints-Portland Area, Congregation Kesser Israel, Congregation Neveh Shalom, Ecumenical Ministries of Oregon, Episcopal Diocese of Oregon, Native American Youth and Family Center, Portland Kollel, Vancouver Avenue First Baptist Church and West Linn Alliance For Inclusive Community.