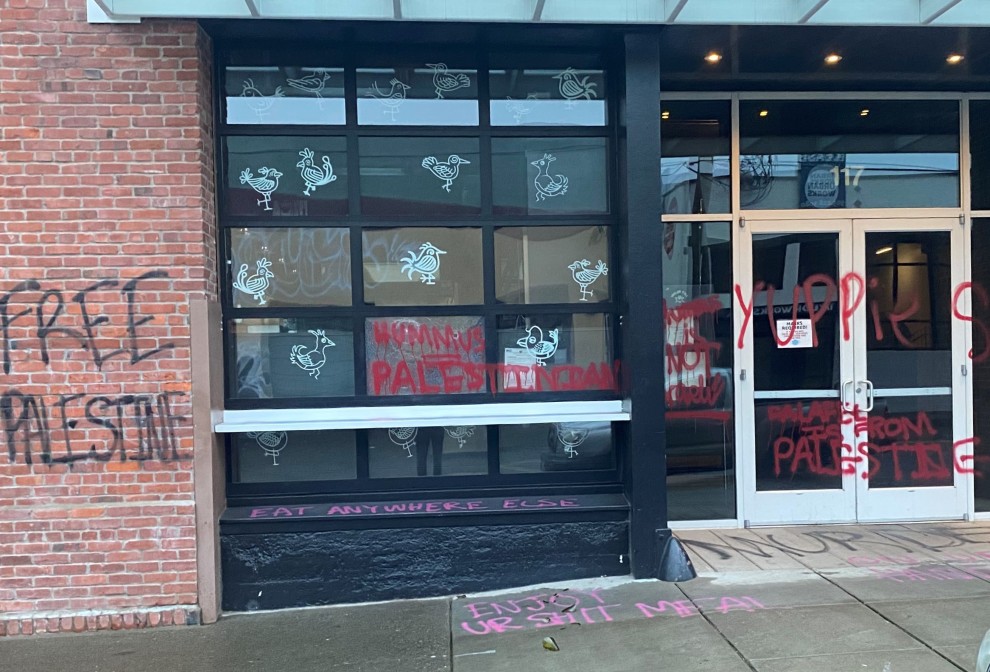 BY DEBORAH MOON
The convergence of the economic and health crises caused by COVID and the rise of extremism have pummeled local restaurants and small businesses this year. In response, a Shop Local movement seeks to keep those businesses viable (see below).
Recent vandalism at three Middle Eastern/Israeli-style restaurants in Portland and a Black-owned restaurant in Salem have exacerbated the hardship for the eateries.
“Generally, as the social justice movement has risen, the pushback from hate groups has been stronger,” says Jonathon Jones, who owns Epilogue Kitchen and Cocktails in Salem.  He adds that President Trump’s support of white supremacists makes “them feel it’s OK.”
Jones says stickers clearly identifiable as related to the Patriot Front were posted in the area around his restaurant Dec. 20. Earlier in the fall, the No Place for Hate sign in his restaurant window was spray-painted over. On New Year’s Day, a crowd that included Proud Boys gathered at the state Capitol to protest COVID restrictions. Far-right marchers from that gathering clashed with a group protecting his restaurant entrance. Jones said he recognized a man in the crowd who had threatened him over the past few months.
For businesses perceived as being connected to the Jewish community, threats come from both far-right Neo-Nazi groups and the far-left Boycott, Divest, Sanction movement that targets Israel.
Aviv and two locations of Shalom Y’all were vandalized with “Free Palestine” graffiti Jan. 10-11. Both restaurants serve hummus, falafel and other Middle Eastern foods often associated with Israel but have removed "Israeli" from their signs in recent months.
Two days after Aviv’s recent move to its new location in the Pearl (100 NW 10th Ave.), the graffiti was spray-painted on the restaurant. Aviv offers vegan Middle Eastern fare including its vegan shawarma fries, which have been popular since they were introduced at the food cart that grew into Aviv.
In 2020, chef Kasey Mills, Jamal Hassan and Laura Amans set out to create the Sesame Collective restaurant group. Sesame Collective restaurants include Mediterranean Exploration Company, Shalom Y’all, Yalla and Bless Your Heart Burgers.
“On Sunday, Jan. 10, Sesame Collective restaurants Shalom Y’all Eastside (117 SE Taylor) and Westside (1128 SW Alder) were vandalized with graffiti,” reads a statement released by the company. “We are incredibly disheartened by these actions. We are committed to operating inclusive spaces, and do not tolerate messages of hate or racism in any form.”
The Portland Police Bureau is investigating the incidents as hate crimes and has also been in contact with the Portland FBI office, reports Regional Security Director Gene Moss. Two of the locations had video of the two suspects, who appear to be female and are dressed in all dark clothing with their faces covered.
Moss urges people to report anti-Semitic incidents on the new security page he has developed on the JFGP website:
jewishportland.org/security.
In Portland and Salem, restaurant owners expressed hope.
“We are so thankful for the outpouring of support we have received from the community over the last 24 hours,” continues the Shalom Y’all statement. “We encourage you to help us in supporting the Oregon Coalition Against Hate Crime.”
Jones says the Salem community is likewise rallying to support minority-owned businesses.
“A lot of the community is saying ‘enough is enough,’ ” says Jones. “I feel hopeful of where it is going – people are becoming aware it is a problem.”

History of LGBTQ+ hate Jan. 21
In this time of national and local reckoning with our country and city’s grim legacy of discrimination and hate, a broad coalition of friends and allies have created a series of public programs to confront hate.
On Jan. 21 at 7 pm, join the local Jewish and LGBTQ+ communities on Zoom for “Uncovering the Hidden History of Anti-LGBTQ+ Discrimination in Oregon” presented by PrideNW and GLAPN.
Launched by the Jewish Federation of Greater Portland, Confronting Hate is an effort by a coalition of minority and faith groups. We are hosting “monthly” webinars representing people who have historically – and continually – been the targets of discrimination and hatred in Oregon. These webinars are presented by a broad group of organizations and speakers in our greater Portland community. This will culminate in a half-day virtual summit on May 26 on Confronting Hate, which will explore current issues around systemic racism, the mainstreaming of anti-Semitism and related topics.
We have been reminded almost daily that our communities of color, immigrants and LGBTQ persons, as well as many of our neighbors of various religious faiths, are frequent targets of vicious hatred. Nevertheless, we have also seen seeds of hope. We have witnessed an upsurge of people ready to stand in solidarity with those who are targets of discrimination and hate – people who are eager to listen, to learn and to take action to make Portland a place that truly protects the lives, well-being and dignity of all who live here.
Register at: jewishportland.org/uncovering-the-hidden-history-of-anti-lgbtq-discrimination-in-oregon