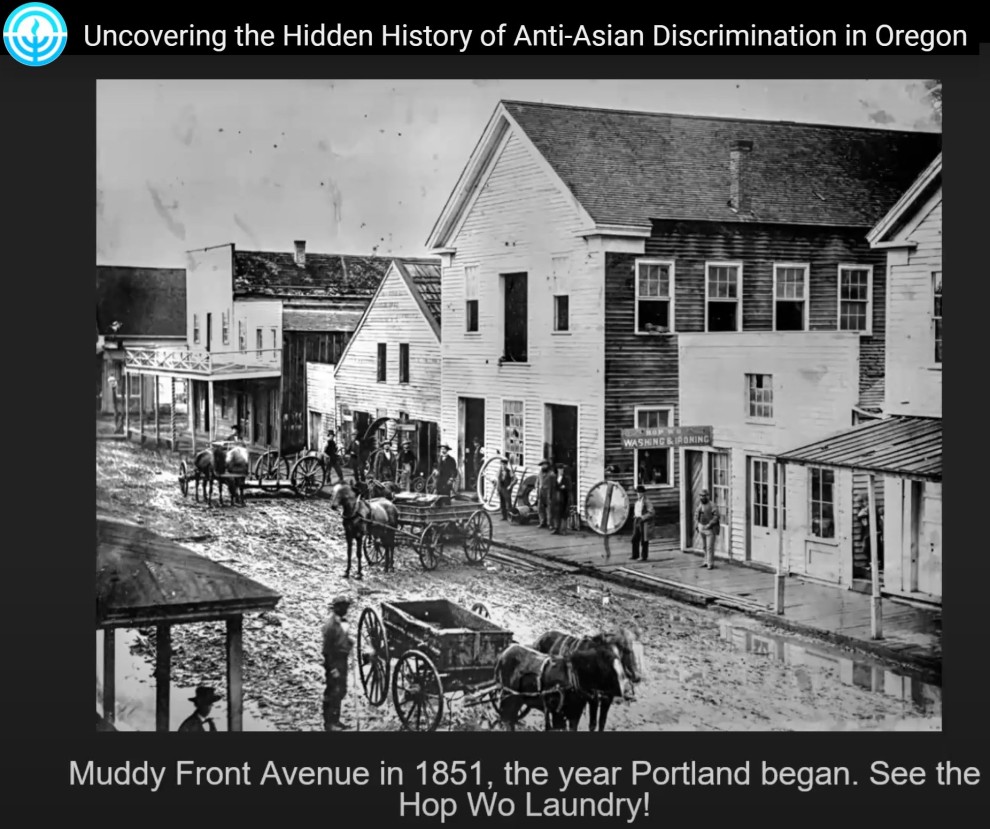 PHOTO: Chinese merchants arrived in Portland early in the city's history. But stereotypes and the Exclusion Act led to violence against the community. Now new stereotypes blaming Asians for COVID-19 have sparked a new wave of violence. Attacks have soared nationwide and a dozen Asian-owned businesses in downtown Portland have been vandalized. Below, Judy Margles moderates a discussion with Chisao Hata and Jackie Peterson-Loomis. JCRC Director Bob Horenstein introduced the Hidden History program.

BY DEBORAH MOON
“Who would I have become if my life had not been affected by racist policies?” asked third-generation Japanese American activist and artist Chisao Hata.
It is a question that could have been asked by any of the minority speakers in the six-part Confronting Hate webinar series created by the Jewish Community Relations Council of the Jewish Federation of Greater Portland and co-sponsored by several other groups. Webinars on the history of discrimination against Blacks, Native Americans, immigrants, LGBTQ+ and now Asians can be seen at jewishportland.org/uncovering.  A March webinar will explore anti-Semitism.
“How much did I lose, did we all lose?” asked Chisao during the Feb. 23 webinar Uncovering the Hidden History of Anti-Asian Discrimination in Oregon. “A child who experiences … rejection is a loss for our country.”
Chisao is the daughter of the first Japanese American nurse in Oregon. Her parents were married in Poston, Ariz., in an internment camp where her mother was paid $19 a month as a camp nurse. Her parents, like the other interned Japanese Americans, lost their homes, businesses and communities.
Japanese internment camps were established during World War II by President Franklin Roosevelt through his Executive Order 9066 in reaction to the bombing of Pearl Harbor. The order and camps are widely viewed as the most atrocious violations of American civil rights in the 20th century.
“My parents and 120,000 Japanese Americans lived three to five years in 10 concentration camps in America,” says Chisao. “That happened to American citizens.”
That discrimination continues.
Introducing the webinar, JCRC Director Bob Horenstein said, “Tonight’s program is especially timely and significant. Three thousand Asian Americans, many elderly, have been attacked since the onset of the pandemic in America. Locally, recently over a dozen Asian businesses were vandalized.”
The surge in hate incidents against the Asian American community since the start of the pandemic was set aflame last year when Trump and other officials referred to COVID-19 as the “China virus” or the “Kung flu.” A United Nations report noted that more than 1,800 racist incidents against Asian Americans in the United States were reported in an eight-week period from March to May 2020 alone.
The Confronting Hate webinar was moderated by Judy Margles, director of the Oregon Jewish Museum and Center for Holocaust Education. Judy said the museum teaches about all forms of discrimination “and stereotyping is certainly one of them.”
The webinar also featured Jackie Peterson-Loomis, volunteer Executive Director of the Portland Chinatown Museum, which she cofounded with a group of Chinese American elders with deep family roots in Chinatown.
Jackie traced the arrival of Chinese immigrants to the West Coast to the California Gold Rush. The first arrivals were entrepreneurs who created an extensive merchant culture including laundries. It didn’t take long for discrimination to set in. She said it arose from the fact that Chinese workers who arrived after the early merchants soon became the preferred workers because they were modest, sober and could be paid less.
“It disturbed the ability of Irish … and other Americans to get jobs they thought they deserved,” said Jackie.
The Chinese Exclusion Act of 1882 suspended Chinese immigration for 10 years and declared Chinese immigrants ineligible for naturalization. The Act was renewed in 1892 and made “permanent” in 1902; it was repealed in 1943.
By 1900, Portland’s Chinatown had become the second largest on the West Coast (only San Francisco’s was larger). But the very successful Chinese merchant community “collapses after 1900.” Stereotypes comparing Chinese to vermin and rats helped create a very violent era for the community.
Now a new stereotype of Asians as the cause of COVID-19 has led to new waves of violence.
Bob said that emphasized the importance of the Hidden History series.
“We did not learn this history in our schools… It has been whitewashed, ignored or even distorted,” he said. “To be effective in addressing current issues of racial injustice, it is really important to look back before we move forward into the future.”
The final webinar on March 18 will explore the history of Jews and anti-Semitism in Oregon, featuring Bob and Professor Ellen Eisenberg from Willamette University, again moderated by Judy. Register at jewishportland.org/uncovering.
On May 26, the JCRC and the many partner organizations that have participated in the history webinars will gather for a virtual summit to confront hate.