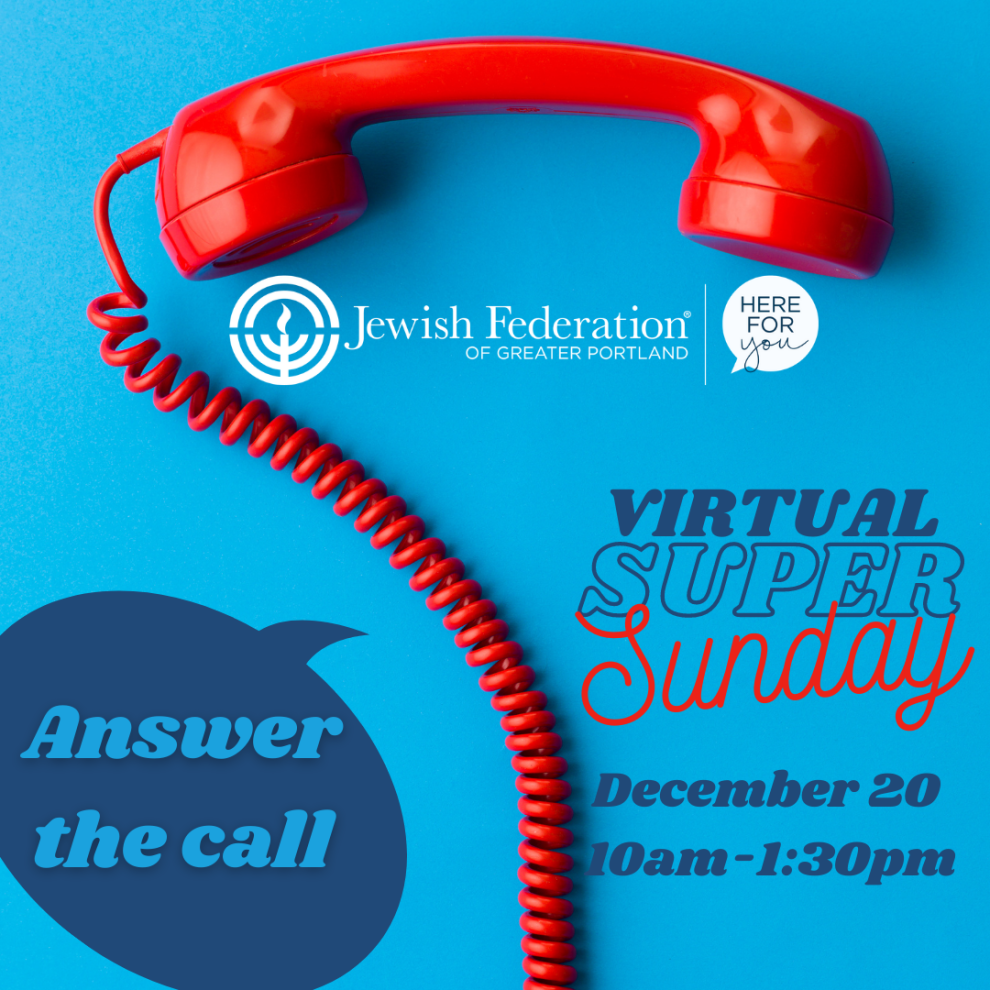 Super Sunday is about connections – it connects people with each other, and it enables the community to connect people with the services they need.
For at least half of its 100-year history, the Jewish Federation of Greater Portland has used phonathons to help fund needed services in the community. In about 1980, UJA (now Jewish Federations of North America) created a nationwide Super Sunday when Federations hosted huge themed parties, and volunteers called supporters the Sunday before the Super Bowl; now communities choose their own dates, often in December.
“It connects people on so many levels,” says Laurie Rogoway, who was Federation Campaign Director for nearly three decades beginning about 1984. “It has importance way beyond the dollars raised.”
Priscilla Kostiner, who chaired Portland’s second Super Sunday in about 1982 with her husband Tony, explains that Super Sunday gets people involved, educates them on what Federation does, thanks them for their past support, finds out if they are in need and raises essential funds for community needs.
Though Super Sunday reaches a large percentage of donors, it only raises a small percentage of the total campaign since most of the gifts are small. This year, the financial impact will get a boost from a generous donor, who will match dollar for dollar all increases of 10 percent or more over the previous year’s gift. They will also double match all increases of 20 percent or more.
“Make a gift that directly saves lives,” says JFGP Campaign Director Wendy Kahn. “A gift to Federation will provide dignity for Holocaust survivors who are living in isolation by providing a meal, your gift will provide lifesaving funds for PPE and other support for seniors, access to education and equipment to learn during the pandemic for schools, and build relationships through outreach with the Black, Indigenous, Latinx communities in Greater Portland and so much more.”
Priscilla has worked on Super Sunday as both a volunteer and Federation professional over the years.
She remembers the year Super Sunday’s outreach began by asking, “Are you OK?” When callers took to the phones during the Willamette Valley flood of 1996, they first asked, “What do you need? before asking What can you do for someone else?”
“We were able to help a lot of people in dire situations,” she says.
Priscilla and Laurie both recall years of huge celebratory Super Sundays at the Mittleman Jewish Community Center and Portland State University. In both the early years and the past few years, Super Sunday has been a bit smaller with callers gathering in donated office space or Federation’s offices.
“We can’t come together now,” says Priscilla of this year’s gathering limitations due to the pandemic.
But Wendy, Campaign Chair Ted Nelson and their team plan to bring the party atmosphere of old into the Zoom room. This year’s Super Sunday will be different, but it will still connect people, celebrate community and raise important dollars for critical needs.
“This year, we need it to be a Super day and it is easy,” says Wendy. “Everyone can participate from home. Participation means everyone can make a meaningful gift – you don’t need to wait to be called.”
So answer the call and make a gift, or donate online at jewishportland.org/campaign-for-community-needs.