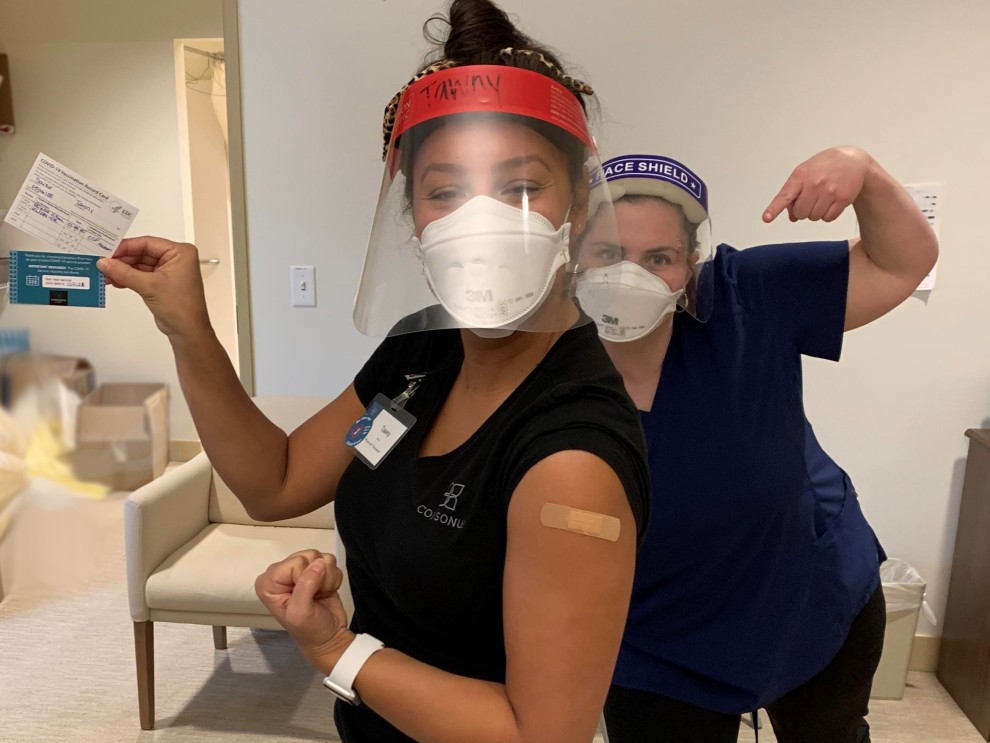 PHOTO: Tawny Souza (Director of Rehabilitation) was the first person at Cedar Sinai Park to get a COVID-19 vaccine.

On Dec. 29, 114 people on the Cedar Sinai Park campus received their first dose of the Pfizer COVID-19 vaccine. Those receiving vaccines included 65 CSP staff and 49 residents in the four households of the Harold Schnitzer Center for Living and post-acute care patients in Robison Jewish Health Center. They received their second dose Jan. 19.
“It was like crossing a threshold of having hope that things could get to a normal state,” says Robison Administrator Krista Mattox.
“There is light,” is how CSP CEO Kimberly Fuson describes the new atmosphere. She adds that even with the vaccine, indoor family visits won’t resume immediately; those are dependent on metrics in the state and county. But, she says, staff and residents are “Happy, glad and absolutely hopeful.”
Mattox says that only those with autoimmune issues who are not recommended to receive the vaccine declined it. In addition, a few residents could not be vaccinated at the first clinic because of the short timeline. The pharmacy that contracts with Robison for services, Consonus Pharmacy, told CSP on Dec. 22 that a clinic could be scheduled Dec. 29. Doses must be administered within six hours of being removed from low temperature and mixed.
Mattox says that gave the facility one day to educate residents on their decision so they could provide consent in time to schedule the first dose. Those who missed that deadline received their first vaccine Jan. 19 and will get the second on Feb. 9.
Rose Schnitzer Manor assisted-living residents are due to get vaccinated in February. RSM contracts with Omnicare’s CVS pharmacy, which has not yet set a date for when vaccines will be available there.
“It’s a different set of logistics for assisted living,” says Fuson, noting CVS staff will administer the vaccines in a central location at RSM.
At Robison and the households, CSP nursing staff vaccinated residents in their rooms, and staff queued up socially distanced in the hall to receive their vaccine.
“We were enjoying the day,” says Fuson. “They had a boom box in the vaccination room and there was some dancing between vaccines – the spray bottles (cleaning the surfaces) were doing the hustle.”
“I am really proud of the Robison team,” says Fuson. “The team has been extremely resilient … every nuance of the pandemic is new. The CSP team’s response has been a testament to who they are as people and their commitment to the Jewish people.”
Robison Director of Nursing Shannon Freeman, RN, likewise praised the nursing staff, calling them “amazing and supportive.”
Only two people had mild negative reactions to the first dose of vaccine. One had a mild headache and one a mild fever.
“It feels like getting a tetanus shot,” says Freeman.
She encourages everyone eligible to get the vaccine as soon as they are able and if concerned to do your research to feel comfortable. Though masking and social distancing will be required for some time, vaccines will eventually allow the country to return to a more normal existence.
When you get vaccinated, you will receive a vaccination card.
“Do not lose it,” says Freeman. “It is your ticket to freedom.”