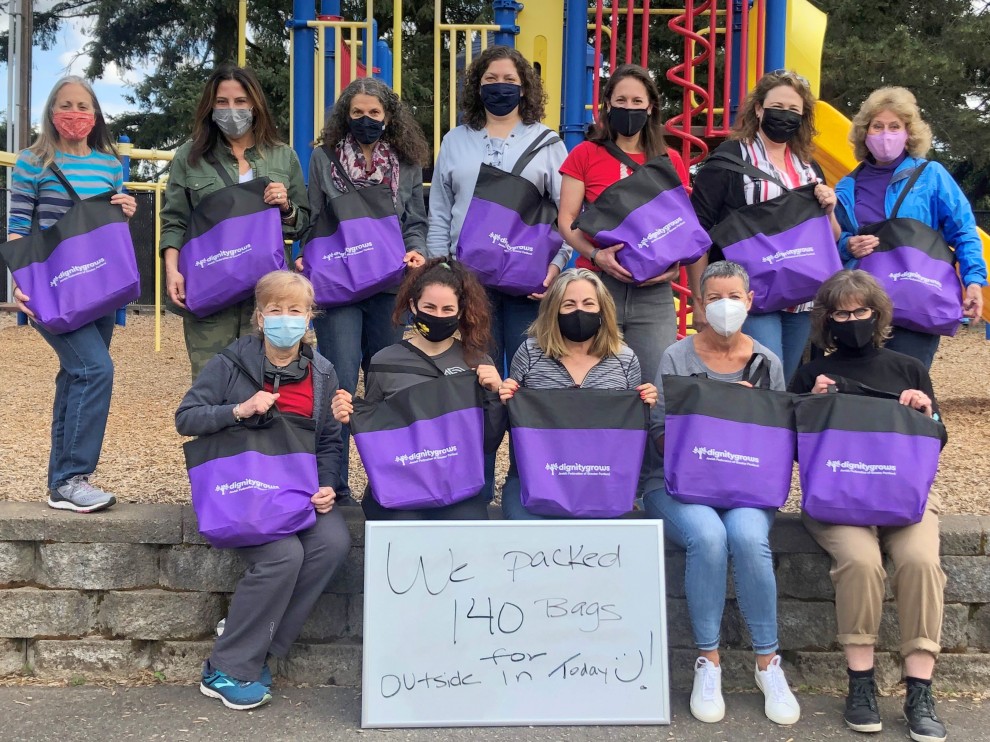 When one of a woman’s most basic human needs goes unanswered, her self-esteem and dignity suffer. The simple answer is this: provide hygiene products to all who menstruate and can’t afford the cost of those products.
“Period poverty” is the lack of financial means to purchase products – such as pads, tampons, a menstrual cup and other hygiene items – required to handle the monthly flow of menstrual blood discreetly and hygienically. It is a problem around the world, in our nation and in our own backyard.
Dignity Grows is providing a solution to tackle period poverty in the United States. The program recognizes there are people – for example, non-binary or gender nonconforming – who were born female, do not identify female and also menstruate. They are included in the distribution.
Today a nonprofit, Dignity Grows began in 2019 as a project of the Hartford, Conn.-based Jewish Federation of Greater Hartford’s Women’s Philanthropy. In March, it launched as the first national initiative in a quarter century from the federation system’s National Women’s Philanthropy. Portland became the 15th city nationwide to launch its own chapter. As of May 3, 22 have launched with another 12 in formation.
Dignity Grows provides personal and menstrual hygiene products every month to people who menstruate and cannot afford them. That’s roughly 20 percent – or one in five – of those who have a period, according to the Dignity Grows’ website.
“Period poverty isn’t something I’d been aware of” either here in Portland or nationwide, says Nicole Sacks, Portland’s Dignity Grows’ chapter lead.
As in Hartford and more than a dozen American urban centers, Portland’s Dignity Grows chapter is an initiative of the Jewish Federation of Greater Portland’s Women’s Philanthropy, explains Wendy Kahn. Kahn is Campaign and Women’s Philanthropy Director and works alongside Sacks on this project.
“I was completely blown away by the numbers, and launching this program here was a no-brainer; we knew we had to get involved and do something,” says Sacks.
Jewish women in Hartford were inspired to act after viewing the 2018 Oscar-winning documentary, Period. End of Sentence., about the lack of access to menstrual products for women in India. The film reports the negative impact this dearth has on the lives of poor girls and women; without proper products, shame keeps many home from school and work, leading to ever greater poverty and low self-worth.
Not exclusive to India, this issue also is huge but largely unknown in the United States, where government benefits like SNAP do not cover necessities like menstrual hygiene products, and they are rarely donated. Yet the reality is that people who menstruate spend an average of $7 a month on products such as tampons and pads, representing an average state tax of 6.25 percent, according to Her Campus.
The pandemic has exacerbated the need for those with few resources to access hygiene products, says Rachel Cain of Outside-In, the first partner organization of Portland’s chapter of Dignity Grows.
“The need is always in flux,” she says of those who rely on Outside-In, a nonprofit located in downtown Portland. Outside-In offers a health clinic, resources for the houseless, hygiene products and more for struggling people ages 13 to 24, many who identify as LGBTQ+. Cain is Outside-In’s Youth Department administrative assistant.
Women’s Philanthropy of Greater Portland became keenly aware of the need, and in March of this year conducted its inaugural Dignity Grows meeting via Zoom. The 14 women online immediately signed up to turn the Dignity Grows initiative into action, Sacks says.
Between mid-March and early May, Dignity Grows’ participants raised the seed money needed to fill hundreds of discreet Dignity Grows zippered tote bags with one month’s worth of general hygiene products – such as deodorant, a toothbrush and toothpaste – and those for menstruation.
“This way, people can grab a tote and go, whereas before they could take only a single pad,” Kahn says. “Now they can take a bag with dignity. This is huge.”
On May 2, the group gathered at the Mittleman Jewish Community Center – outside and socially distanced – for its first Pack. Fourteen women packed 140 totes and enjoyed a uniquely Portland chapter spin during their time together.
One of its five teams is education. Its goal is to teach those at the Packs about period poverty, partner organizations and underlying, related Jewish text-based teachings, explains Debbie Plawner, a member of this team along with Priscilla Kostiner and Dara Wilk.
Kahn says Dignity Grows’ debut Pack went smoothly, and all participants were inspired to learn and do more.
“Doing just a little can reduce barriers, help eliminate stigmas and create a resource for individuals who lack supplies that so many of us take for granted,” she says.

DIGNITY GROWS IN PORTLAND
In March 2021, Women’s Philanthropy of Greater Portland became the 15th chapter of Dignity Grows, which provides monthly personal and menstrual hygiene products to women, girls and individuals assigned female at birth who cannot afford them. If you want to help:
• Volunteer to work with distribution partners as the local Dignity Grows chapter expands. Volunteers can help plan and participate in packing parties (Packs), each of which includes education about the issue or the recipient organization.
• Sponsor Dignity Totes for $10 each; each tote holds a month’s supply of sanitary pads and tampons, toothpaste and a toothbrush, a bar of soap, deodorant and shampoo.
To learn more or volunteer – men and volunteers of all ages welcome – visit jewishportland.org/dignitygrows or email Wendy Kahn at wendy@jewishportland.org.