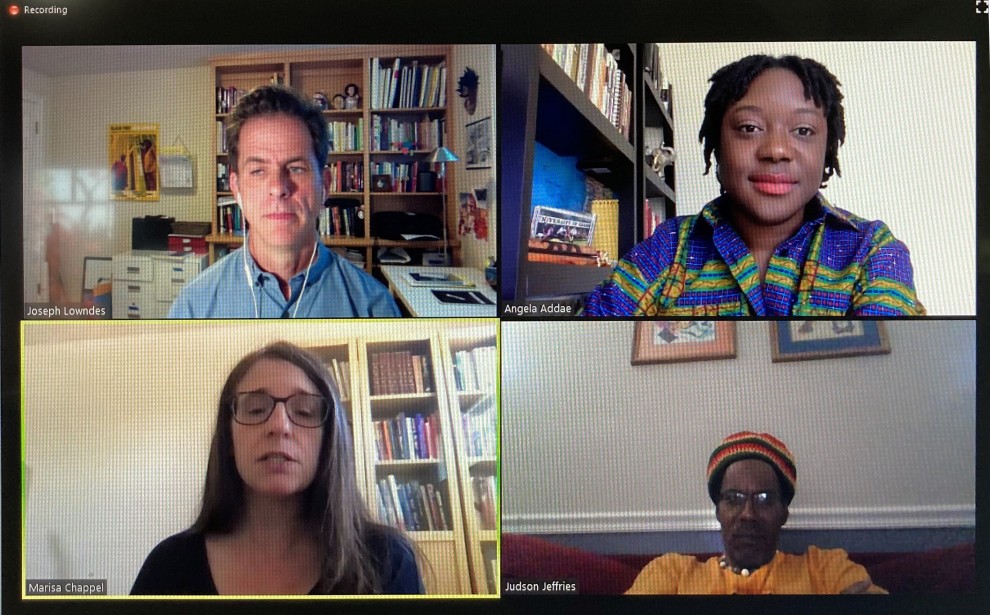 “Racism is as American as apple pie if we are being honest,” said Professor Angela Addae, one of four panelists on the June 18 Zoom program Racism, Protest and Law Enforcement: Historical Context for Contemporary Times. The program was cosponsored by the Oregon Historical Society and Oregon Jewish Museum and Center for Holocaust Education.
While the 13th Amendment abolished slavery, the 14th Amendment guaranteed all citizens equal protection of the laws and civil rights laws have outlawed discrimination, “That is not reflected in our lived experience,” said Addae, who is an assistant professor at the University of Oregon School of Law. “Chattel slavery taught white people to dehumanize Black people.”
In a similar vein, Joseph Lowndes, political science associate professor at the University of Oregon, said, “White supremacism animates almost everything in American political life.” He added that waves of protests against dehumanization in this second cycle of Black Lives Matter “opens up territory for new types of emancipatory visions.”
Regarding those expanded visions, panel moderator Marisa Chapell, associate professor of history, philosophy and religion at Oregon State University, asked about recent calls for police abolition and defunding police.
Without a clear definition of the terms, it is impossible to talk intelligently about abolition or defunding police, said Dr. Judson Jeffries, professor of African American Studies at Ohio State University and editor of the Journal of African American Studies. “If we are talking about going back to a period, I remember growing up in 1970s and 80s, when many police called themselves Peace Officers … and monitored the neighborhood by walking a beat – that’s something I can support. If you are talking about complete eradication, I say pump the brakes.”
In terms of defunding police, Lowndes said many protesters are talking about the role of police. “Why are police called on to take on all these roles to manage multiple crises in society? Where can we put resources differently?”
Addae agreed with reallocating funds to crucial social services that directly address societal problems. “Police are poorly equipped to solve those social problems.”
Panelists also discussed Oregon’s history of Black exclusion, including the state constitution that banned Blacks, free or enslaved, from living in the state. Addae noted the state was founded as a white utopia, and Lowndes added white supremacists have risen in the state in waves – including a strong Ku Klux Klan presence in the 1920s and the White Aryan Resistance drive for a white ethnic state in the Pacific Northwest in the 1990s.
The program concluded with suggestions on how society can move forward in this time of heightened awareness.
“How do we undo racism?” asked Addae. “People say I am not a racist … Admit we all have been indoctrinated … then we can commit to doing the work.”
“For white folks … challenge racism when it comes up (where you live or work),” said Lowndes. Noting racism is rooted in the past, he said, “We may not be responsible for what happened in the past, but we are responsible for what happens in the present.”
Dr. Jeffries added he teaches his students, “They have an obligation to use their degrees as a tool … (to enhance) the human race.”
In introducing the panel discussion, OJMCHE Director Judy Margles noted, “The protests have really encouraged me to look forward with a modicum of hope.” The presentation may have left the audience with a similar glimmer of hope for a more equal future for all Americans.
See the full hourlong presentation at: youtube.com/watch?v=et-lS4xhM8g&feature=youtu.be