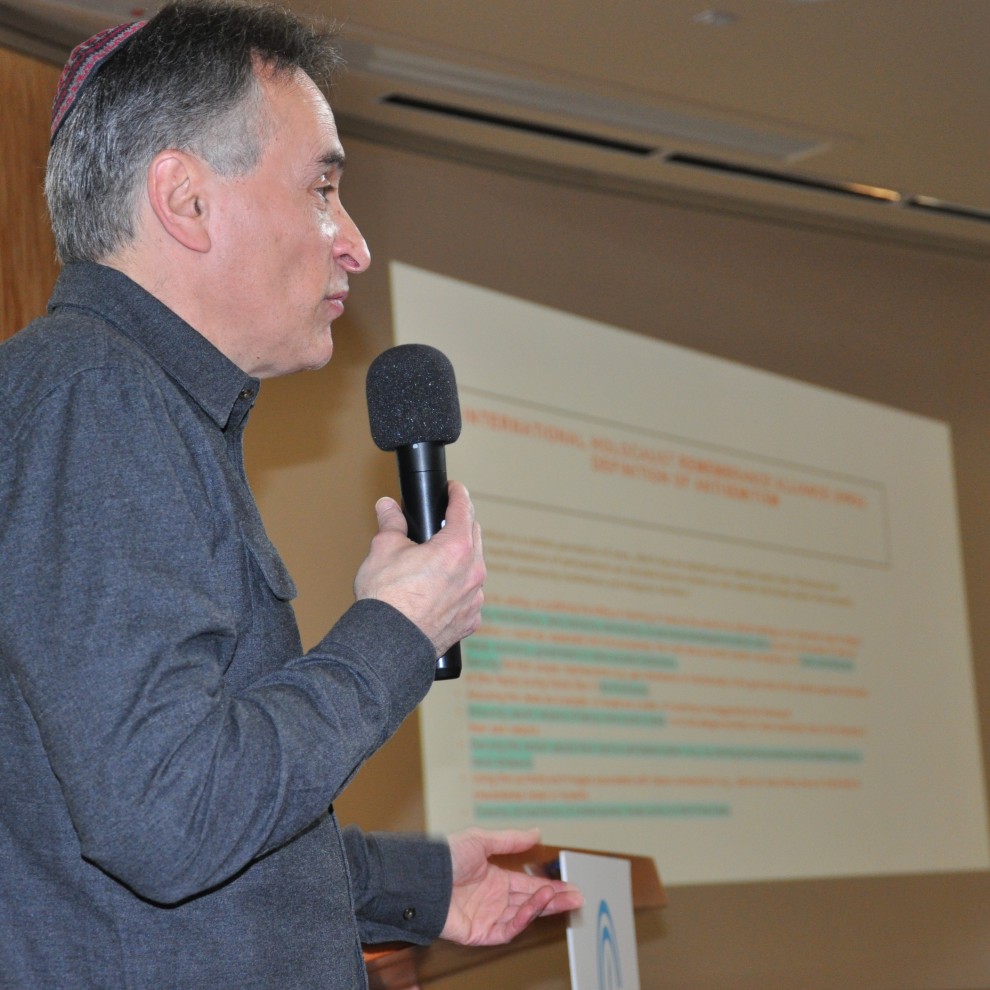 BY DEBORAH MOON
The Feb. 23 program “Mainstreaming of Anti-Semitism in America Today: Effective Strategies for Responding” drew 140 educators, community members, students and parents.
The afternoon gathering at Congregation Neveh Shalom explored a widely accepted definition of anti-Semitism (see below), discussed three scenarios – social justice coalitions, high schools and colleges – where it is prevalent, and shared resources for those combatting hate.
“Any tolerant society should care about anti-Semitism,” JFGP Community Relations Director Bob Horenstein said in introducing the program. “Hate may start with the Jews, but be assured, it won’t end with the Jews.”
The FBI reports that in 2018 (the last year figures are available), of all the hate crimes against a religious target, 60% in the United States were against Jews or Jewish institutions. The same year, physical assaults on Jews increased 105%.
“White nationalist hate against American Jews is a significant problem,” said Horenstein, who then turned to discussing anti-Semitism from the left as well.
He quoted Emory ProfessorDeborah Lipstadt book: “We need to take anti-Semitism from the left seriously even when there aren’t dead Jews.” Lipstadt is the author of Anti-Semitism Here & Now.
Horenstein said that despite the fact Jews have long been involved in social justice causes including immigration, gay rights and climate change, “in some social justice circles there is a litmus test imposed only on Jewish participants … (who are) told ‘Zionism is inherently white supremacist.’ ”
Legitimate criticism of Israel and its policies, including settlements, “does not make you anti-Semitic,” he said, adding that the BDS (Boycott, Divest, Sanction) movement, which is especially prevalent on college campuses, is problematic because its goal is the destruction of the State of Israel.
Several resources to combat hate were shared during the event:
• The Jewish Community Relations Council of the Jewish Federation of Greater Portland will work with parents and school officials to resolve issues related to anti-Semitism. Contact Bob Horenstein at 503-245-6496 or bob@jewishportland.org.
• The Oregon Jewish Museum and Center for Holocaust Education has a Speakers’ Bureau of Holocaust survivors who will speak at any school or venue. OJMCHE also offers class visits and field trips to view the museum’s core exhibits on Discrimination & Resistance and the Holocaust. ojmche.org
• The Anti-Defamation League trains high school students to combat racism on their campus. The ADL also has resources on its website including anti-bias tools and strategies for both educators and families/parents: adl.org/education/resources/tools-and-strategies/anti-bias-tools-strategies.
•  OJMCHE and the ADL will present professional development workshops in August for educators on Facing History and Ourselves.
• Portland United Against Hate collects data about incidents of hate. Report incidents at reporthatepdx.com.
Western States Center confronts white nationalism and works to strengthen inclusive democracy. westernstatescenter.org
The event was presented by the JCRC and Portland Area Jewish Educators with support from the Oregon Jewish Community Youth Foundation and NCSY.
COMING EVENTS
March 12: No Place for Hate
Families, parents and students are invited to A No Place for Hate Program Introduction at Wilson High School, 1151 SW Vermont St., Portland, on March 12, 2020, from 6 to 8 pm. The event is a partnership between the Anti-Defamation League and Wilson Community and Family Equity Council.
A cohort of 10th- to 12th-graders who were trained by the ADL to be No Place for Hate Anti-Bias Peer Facilitators will share an activity and ADL Pacific NW Director of Education Scottie Nash will discuss how to dialogue with children when they experience or observe hate.
The ADL’s student-driven program has been adopted in 11 Oregon schools.
March 18: StandWithUs
Campus Crash Course
Teens, parents and Jewish community members are increasingly concerned about the anti-Israel sentiment on college campuses that often spills over into anti-Semitic speech and policies. This event brings experts from the field to explain and discuss: anti-Semitism vs. legitimate criticism of Israel, the evolving face of BDS, and knowing your rights.
The event will be held 6-8:30 pm, March 18, 2020, at Congregation Neveh Shalom, 2900 SW Peaceful Lane, Portland. It is sponsored by Neveh Shalom, StandWithUs Northwest and the Jewish Federation of Greater Portland. Cost is $10/person or $15/family and includes kosher dinner.
For information, call 206-801-0902. Register at: tinyurl.com/CNSCollegeCampus20.
DEFINITION OF ANTI-SEMITISM
Developed by the International
Holocaust Remembrance Alliance
“Antisemitism is a certain perception of Jews, which may be expressed as hatred toward Jews. Rhetorical and physical manifestations of antisemitism are directed toward Jewish or non-Jewish individuals and/or their property, toward Jewish community institutions and religious facilities.”
Some examples from definition:
• Accusing the Jews as a people, or Israel as a state, of inventing or exaggerating the Holocaust.
• Accusing Jewish citizens of being more loyal to Israel ... than to the interests of their own nations.
• Denying the Jewish people their right to self-determination, e.g., by claiming that the existence of a State of Israel is a racist endeavor.
• Using the symbols and images associated with classic antisemitism (e.g., claims of Jews killing Jesus or blood libel) to characterize Israel or Israelis.
• Holding Jews collectively responsible for actions of the state of Israel.