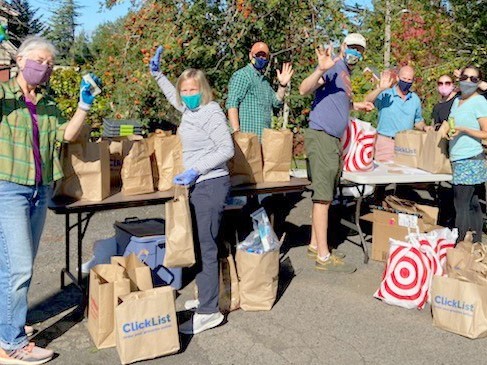 PHOTO: Last fall, 78 households responded to the call to aid those facing food and housing insecurity and dropped off 745 food sacks and other essentials on Mitzvah Morning. Now, more drop off sites have been added for a pre-Passover food drive to bring in even more food for three food pantries serving different parts of the greater metro area.

Food insecurity in Oregon is at the highest rate in over a century according to the Oregon Food Bank. That’s saying something for a state the USDA said might have been the hungriest state in the nation in 1999.
So this year, Portland’s Jewish community has organized a pre-Passover food drive (see below) with drop sites in SW, NE and SE Portland and Hillsboro. Donations of nonperishable foods will be distributed at three food pantries that partner with the Oregon Food Bank in different parts of the greater metro area. (A separate drive to ensure Passover4All is also under way – see below.)
“We’re proud of having four drop sites and so many Jewish community partners and recipient organizations,” says Caron Blau Rothstein, JFGP director of community planning and a co-organizer of the event.
As you do your spring cleaning and scour your pantry to clear out your hametz (leavened products) before Passover, gather food to donate to feed people who may not know where their next meal is coming from.
The Jewish community has long taken leadership roles in battling Oregon’s hunger crisis. Emily Gottfried, z”l, American Jewish Committee-Oregon, and Bob Horenstein, Jewish Federation of Greater Portland, were among the statewide conveners of the Oregon Faith Roundtable Against Hunger, which kicked off at the first annual Harvest of Hope breakfast in October of 2003. Thanks in part to the efforts of OFRAH, Oregon soon dropped out of the top 10 hungriest states.
The 2008 recession upped hunger numbers again. Oregon fought back again, and its steady decline in food insecurity from around 2014 represented the greatest improvement by any one state over that five-year period according to a 2020 report from the USDA.
The COVID economic crisis that began in spring 2020 reversed all of that progress.
A December 2020 study from Oregon State University found the food insecurity rate in Oregon had more than doubled in a year, with at least 1 million, hence one in four, Oregonians experiencing food insecurity in 2020. The crisis has brought the state to levels of food insecurity not seen before.
So once again, please join the local Jewish community in stepping up to do our part.

Donate to ensure Passover for All
Every Jewish community is obligated to ensure that everyone has the food they need to celebrate a joyous Passover, and this year – as we have done for over 20 years – Portland’s Jewish community is stepping up. The Passover4All campaign will be working to ensure that area families can truly celebrate Passover. This year, there is more demand than ever because of the hardships brought on by COVID-19.
With your help, we will raise $7,000 to provide local families who would not otherwise be able to celebrate with the food they need to make a seder. The Jewish Federation of Greater Portland partners with Jewish Family & Child Service and Congregation Kesser Israel on this important project.
Donate at jewishportland.org/passover4all-campaign.