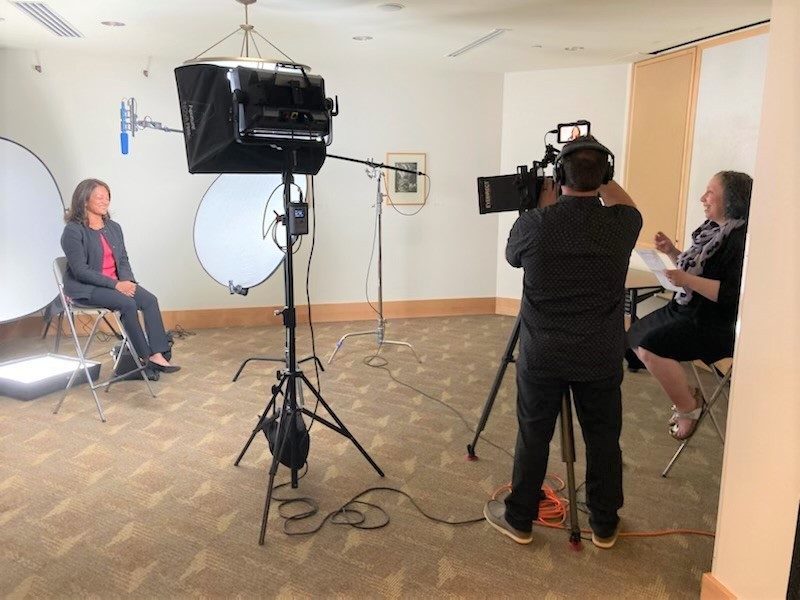 During the pandemic, Jodi Garber-Simon realized that all five of the Multnomah County Commissioners are women. Then Andrea Valderrama took office in April 2021, and Oregon’s State House of Representatives flipped to a female majority. Combined with a female governor and a female speaker of the house, that was a lot of women in power.
“That is not the norm for the rest of the country,” Jodi says.
This month is the premier of the film she has produced exploring that phenomenon: “Shattered: How Women Broke the Glass Ceiling in Oregon Politics.” The film premier and VIP reception featuring three generations of female political leaders will be 6-8 pm, Aug. 18, at the University of Oregon in Portland. Tickets start at $10 at tinyurl.com/womenor.
When Jodi embarked on the project, she was the Director of Marketing and Communications for the Jewish Federation of Greater Portland, a post she left in December 2021 to become Director, Global Communications, for Tektronix. She also continues to help her husband, Neil Simon, with the company the couple founded, Bighorn Communications.
“Neil had made other documentaries, and I have assisted,” says Jodi, noting that for this film, she took the lead as executive producer. “As a woman, it seemed like my story to tell.”
The film includes footage from Valderrama’s swearing in and interviews with former Governor Barbara Roberts and the five Multnomah Commissioners – Chair Deborah Kafoury and Commissioners Susheela Jayapal, Jessica Vega Pederson, Lori Stegmann and Sharon Meieran, who is Jewish. The narrator is Aslan Newson, a young activist who was involved in renaming the former Wilson High School as Ida B. Wells High School. Newson graduated from Ida B. Wells in June and will attend Yale in the fall.
Jodi says she chose a young narrator to emphasize the hopeful nature of the film.
“This is the story about how women can come to power,” says Jodi, the mother of twin daughters, 9, and a son, 12. “I hope all little girls can watch this film and be inspired.”
“Women are half the nation yet less than a third of elected leaders. But in Oregon, women have blazed a trail of their own,” according to the event page. “With women’s rights under attack, women’s representation matters more than ever.”
The couple financed the film themselves and want to recoup some of the costs, but they also want to support women’s rights. Therefore, a portion of the proceeds from the film premier will be donated to Planned Parenthood. The film has been submitted to several film festivals, but no other showings have been confirmed.