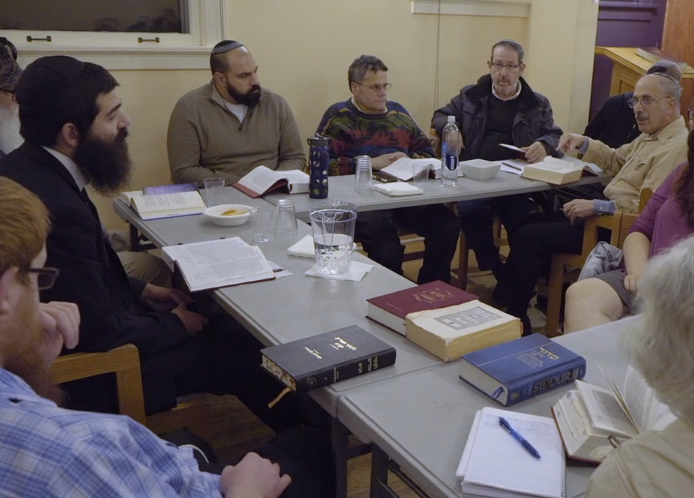 PHOTO: For the first four years of the class to study The Tanya, students met at Chabad House in SW Portland. After COVID hit, the class shifted to Zoom for its final months.

A class that began as a 10-week exploration of Kabbalah recently concluded a five-year study of the Tanya, an early work of Hasidic philosophy.
Taught by Rabbi Shneur Wilhelm, the in-depth study of the Tanya concluded Nov. 16, 2020. The group, with about 10 people completing all five years, met each Monday night at Chabad House in Southwest Portland until COVID forced the study online. Even before COVID hit, the class was being recorded and posted online on Soundcloud (soundcloud.com/kabbalah-of-the-soul). More than 2,000 people from places such as Brazil, the United Kingdom, France, Israel, Russia and Turkey tuned in during the run.
“It has been a monumental task and transformative experience,” says Rabbi Wilhelm, principal of Maimonides Jewish Day School and son of Rabbi Moshe Wilhelm, founder and head of Chabad of Oregon. “The class inspires everyone who comes – and even many who don’t.” The recorded classes have garnered almost 50,000 listens.
Local participant Gary Darling says, “It’s hard to believe that we actually finished all 53 chapters of Tanya! For several years now, I have looked forward to Rabbi Shneur’s always well-prepared classes, as well as the interesting questions, discussions and camaraderie from fellow classmates.”
Darling says he learned three major concepts “that actually help me with life”: the ability to follow the ways of the Torah are exceedingly near to us; the brain rules the heart; and when learning to do mitzvot and serve Hashem, the struggle itself is the success.
Bruce Banansky says the rabbi made basic aspects of our religion easier to understand.
“Learning Tanya with Rabbi Shneur was such an incredible foundational growth experience,” says Mark Berkovitch. “The Tanya is like a ‘one size fits all’ playbook for life, a GPS for the soul. There is so much to learn and not enough time. The rabbi broke it down into bite-sized pieces so we would not be overwhelmed and taught in layman’s terms so we could grasp the depth and breadth of Tanya’s concepts and ideas.”
Based on the Tanya, a book written by Rabbi Shneur Zalman of Liadi (1745-1812), the founder of the Chabad-Lubavitch movement, the class examines the big question: “What am I and what is my potential?” The Tanya compacts four millennia of Jewish wisdom to answer the great personal and existential questions of life.
“The Tanya’s teachings have been extremely inspirational, encouraging me with its many concepts,” says Basha Rothstein Brewer. “Using my intellect over negativity doesn’t come easily for me, but Moach Shalit al haLev (the brain/mind rules the heart) draws me to the comforting, sustaining hug of Torah study, where there is the light that pushes away darkness, and where I derive strength.”
Basha goes on to thank Rabbi Wilhelm “for all these years that you have brought us to the Alter Rebbe’s yechidus, imparting these life-transforming teachings which, B’ezras Hashem, I will implement and treasure for the years to come.”