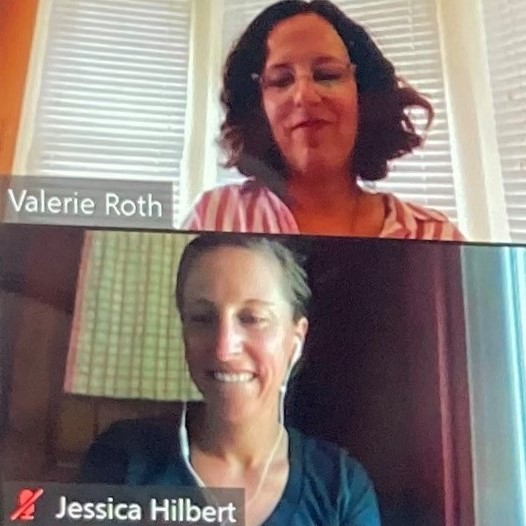 Three Jewish women who launched food businesses based on recipes tested in their kitchens told Zoom attendees at the MJCC’s PDX Biz series, held Aug. 20, that entrepreneurship is a tough, rewarding journey.
The three shared their personal stories and offered advice to others considering the venture.
“Don’t do it – it’s surprisingly hard,” said Jessica Zutz Hilbert, who founded Red Duck Foods as an MBA class project with two classmates, now partners, at the University of Oregon. The trio developed a line of organic sauces and condiments that are now sold at about 5,300 stores in the United States, Canada and Hong Kong. Despite the challenges, she said, “It has been so incredibly rewarding to make a product that people love.”
Jenn Topliff, who founded Roons, which sells coconut macaroons made by hand and dipped in real chocolate, concurred: “It’s lonely and insanely hard.” She urged aspiring entrepreneurs to “know who your audience is and where they are.”
Valerie Roth, who makes Fire Brew under the business name Mind Your Manna, said entrepreneurs must be nimble, flexible and persistent. She started brewing the apple cider tonics in her kitchen after studying holistic nutrition. She took the tonics to farmers’ markets to get feedback and now sells the “strong and tart vinegar product that tastes really, really healthy” in about 1,000 stores.
Flexibility has been especially key during the pandemic.
“We had to pivot,” said Valerie, noting she is not doing farmers’ markets this year. “Retail was 80% of our sales … it dropped to a whisper. We turned to online as a major source of revenue.”
Wholesale accounts “went dead,” said Jenn, noting Roons are sold primarily in boutique and coffee shops. She says her individually wrapped Roons are largely a “gifting” product. Online sales worked in the spring when it was cool, but as the weather got hotter, she was “hemorrhaging money on ice packs, thermal inserts and shipping costs.” She’s down to one baker and does all the packing and fulfilling herself. “I’m doing someone else’s job … I’m not doing forward thinking.”
On the other hand, for Jessica and Red Duck Foods, COVID didn’t adversely impact the business. “We were all working remotely already” and “saw a bump in March and April sales” that came with the spike in grocery sales nationwide. Their big change has been the cancellation of trade shows.
“The plan for us was to become a nationally recognized brand,” said Jessica. So after testing about 30 recipes in their kitchens and settling on a preliminary line of three recipes, “we went to the Market of Choice office and asked them to help us with a class project. They gave us help to get on their shelves.” Grocery stores account for the majority of their sales.
The next PDXBiz lunch at noon, Sept. 17, will be Portland Real Estate in the Age of COVID-19. The Panel is in formation, but will include Evan Bernstein, Pacific Northwest Properties, and Eddie LeBerge, Turner Construction. Moderated by Jonathan Singer of Barg Singer PC.
For more information on the series and registration for the September Zoom event, visit: oregonjcc.org/arts-culture/pdxbiz

Just eight days after the PDX Biz event, Red Duck Foods announced it had been acquired by Beaverton-based BG Specialty Sales.  Red Duck co-founder Jessica Zutz Hilbert will continue to work on the brand under the new ownership managing sales and marketing as she has for the past eight years. See story: jewishportland.org/jewishreview/jr-stories/red-duck-sold