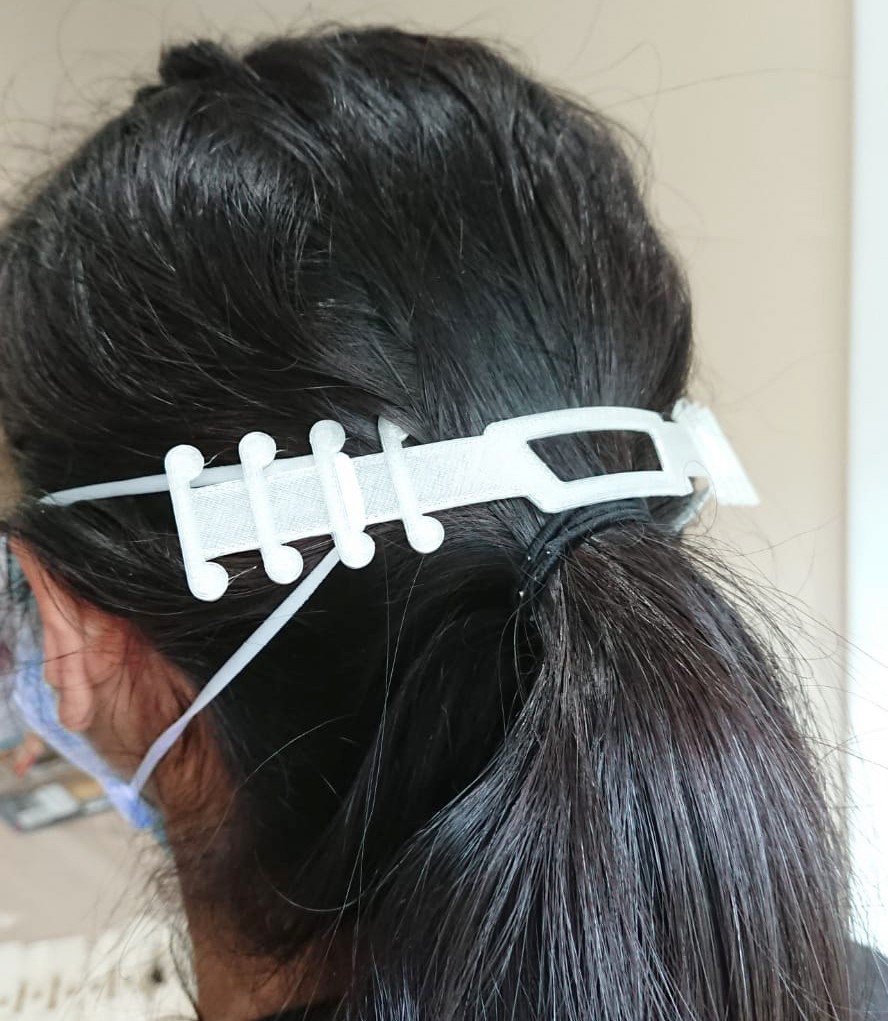 Last June Israeli-Americans Elias Stahl and his business partner Gaia Giladi decided to launch HILOS in Portland because of the city’s incredible ecosystem in footwear, technology and 3D printing, as well as its livability.
Just months before their tailored shoes made to order were ready to launch, COVID-19 changed the world.
By early April, HILOS had shifted its prototype printers to producing personal protection equipment, specifically “ear savers,” for people who need to wear masks all day, every day. They have produced and shipped 1,000 ear savers and plan to continue printing 1,000 per month as long as they are needed. They also have found an open source custom mask design developed by a medical company in Italy. They have created a prototype and are seeking enough of the highly specialized material needed to begin production of customizable plastic masks, as well.
“We are doing it all pro bono – the engineering, 3D printing and materials,” says Elias, co-founder and chief executive of HILOS.
Ear savers are plastic bands that sit across the back of the head so people can hook their mask to the band rather than behind their ears, where bands can cause pain and skin tears or lesions during extended use.
The customizable masks will be printed with a specialized material that can be soaked in hot water and then form-fitted for individual use. Elias says cloth masks are often too thin and disposable masks create a lot of waste, but the plastic masks are reusable and cleanable as well as comfortable.
“We felt a responsibility,” says Elias of the company’s decision to produce the PPEs. “Any company, anyone, who has the capacity needs to turn it towards” producing products needed during this crisis.
HILOS (hilos.co) still plans a presale launch in June with a full launch shortly thereafter. The launch of the made-to-order shoes won’t interfere with the PPE production, says Elias. The shoes will be produced on a much larger printer using high-performance material. The PPEs are printed on the prototype printers the company used to develop the shoe design.
HILOS was able to go from concept to “proof of concept” in just three months, because they were able to make design changes every day using the prototype printers to see the revision immediately rather than having to send a new design to a factory and wait a couple weeks for a new model. Since they have completed development, those prototype printers are now available for PPE production.
“3D printers allow fast response to something like the COVID crisis,” says Elias.
When HILOS first started printing the ear savers, they had a hard time finding where to send them.
“There was great demand at the front lines, but something was broken in the middle,” Elias says.
Then he met Michelle Bombet-Minch through the Oregon Israel Business Alliance, and she helped connect him. Since then, HILOS has shipped supplies to Good Sam Hospital in Newberg, Homewatch Caregivers in Portland, Portland Providence Hospital and three health facilities in
Baton Rouge, La. Those needing ear savers (and soon masks) can contact him at Elias@hilos.co.
Elias made aliyah to Israel from California in 2012 and served in the IDF. He and his wife, Kristen, moved to Washington, D.C., while Elias earmed his master’s at Johns Hopkins. After moving to the Portland area, the couple joined Congregation Neveh Shalom, where Elias serves on the Israel360 and security committees. He also taught a krav maga techniques class at the Mittleman Jewish Community Center. They are expecting their first child this summer.