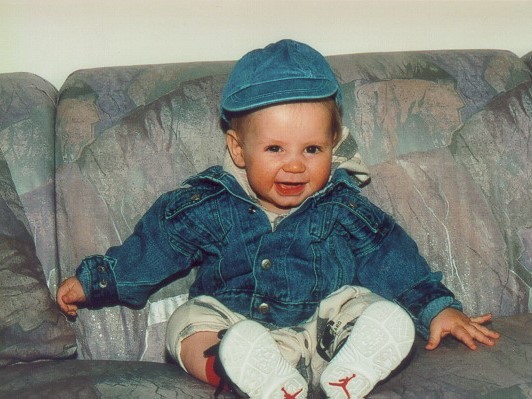 PHOTO: September National Tay-Sachs Awareness Month (see below) and Shari Ungerleider shares the story of her son, Evan (pictured), who lost his battle with Tay-Sachs when he was almost 4½ years old.

When I gave birth to my first child, Evan, in August of 1994, my husband, Jeff, and I were so happy that after nine long months of anticipation, we were blessed with a beautiful and healthy baby.
We joyfully watched Evan develop normally for the next six months and had the normal hopes and dreams for his future. Over the next few months, we started to become concerned as we realized that Evan was not developing at the same pace as other children. We witnessed our friends’ children begin to roll over, sit up, crawl, stand, walk, talk and interact with each other. Evan was not able to do any of this; he just watched and smiled, but soon his smile began to lessen and his observing became a distant stare.
Evan was not able to sit up by himself without falling over. He was having difficulty eating.
At 10 months, we brought Evan to the pediatrician for what we thought was a standard well visit, but this turned out to be the beginning of our nightmare. After several months, visits to numerous doctors and endless tests, Evan was diagnosed with Tay-Sachs disease.
This news not only devastated us, it shocked us, since I was tested for Tay-Sachs and told I was not a carrier. I immediately contacted my OB/GYN, who upon re-examining my records discovered that I had actually tested positive as a Tay-Sachs carrier. Having my test misread inspired me to promote appropriate genetic testing coupled with genetic counseling. All genetic tests should be read by a genetic counselor who is trained to interpret the results and counsel individuals/couples.
As Evan’s disease quickly progressed, he was unable to move on his own, he suffered multiple seizures daily and had respiratory difficulty, which required us to suction him regularly. He eventually became blind and deaf. We had a feeding tube surgically inserted so that Evan would be able to stay properly nourished and medicated. He had to undergo several hours a week of physical therapy so that his muscles would not atrophy.
We wanted to care for Evan at home so that we could spend as much time with him as possible and not take a moment of his life for granted. We wanted to create a lifetime of memories with Evan in the short time he had left. We spent our days taking him to the park, pool, beach and zoo. He was constantly surrounded by people who loved him. Evan lost his battle with Tay-Sachs when he was almost 4½ years old.
We have three other healthy children. With each of my other pregnancies, I updated my carrier screening for diseases that were added to the panel. Knowing that Jeff and I were both carriers for Tay-Sachs disease, we were able to make family planning choices that enabled us to have healthy children. We chose to get pregnant naturally and have a CVS test performed at 10 weeks. From the bottom of my heart, I believe that every couple should be able to make educated decisions based on accurate genetic information. We are so blessed to have our other children; however, it does not take away or replace the tremendous loss we feel every day for Evan. I constantly imagine what it would be like for us as a family if Evan were still alive.
To honor Evan, I decided to turn our tragedy into something positive so that other families would be spared the suffering that we experienced by raising awareness about the importance of carrier screening. It is essential that everyone who is planning to start or add to their family seek preconception carrier screening along with genetic counseling to determine if they are at risk of having a child with any of these horrific diseases. The purpose of carrier screening coupled with genetic counseling is to identify carrier couples, preferably before pregnancy, and help them understand the impact of the disease they carry on an affected child and to present reproductive options to the couple.

Shari Ungerleider is an outreach coordinator for JScreen. Shari, her husband, Jeff, and father, Stanley Michelman, founded the Evan Lee Ungerleider Foundation, part of the National Tay-Sachs and Allied Diseases Association. Shari has four children, Evan (mentioned above), Justin, Leigh and Sydney. She lives in Wayne, N.J., with her family.

In 2008, the U.S. Senate named September National Tay-Sachs Awareness Month.
One in 30 Ashkenazi Jews are carriers of Tay-Sachs, and one in 300 people of the general population are carriers. While there is no cure for Tay-Sachs, genetic testing can determine who is a carrier and whether their child will be at risk for this and other diseases. Since the 1970s, the incidence of babies born with Tay-Sachs has fallen more than 90% among Jews because of increased screening in the Jewish community. One in three Jews is a carrier for one of the many Jewish genetic diseases.
JScreen is a nonprofit, community-based public health initiative headquartered at Emory University School of Medicine and dedicated to preventing Jewish genetic diseases. The JScreen “spit kit” is easily ordered online, used at home and then mailed in so that clinical geneticists can test the DNA. The reproductive carrier screening panel tests for more than 200 genetic diseases and includes those that are commonly found in the Jewish population and other populations. If a person’s or couple’s risk is elevated, a certified genetic counselor will privately address their results, options and resources.
Learn more and order a spit test at jscreen.org.