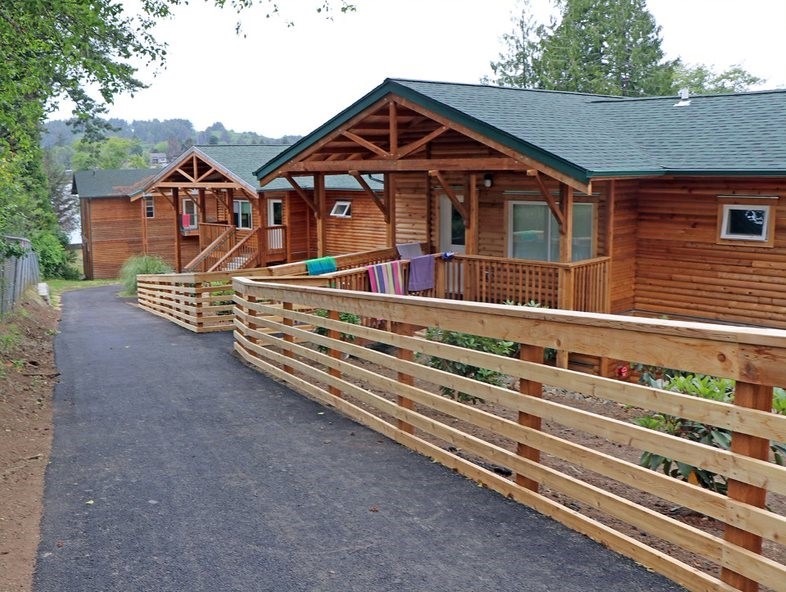 PHOTO: An earlier Yashar grant allowed BB Camp to make these two-story cabins on the south side of camp ADA accessible. They were able to excavate into the hillside to build the cabins, so a bridge could provide access to the second level. The current grant will provide the same access for the second floor of the new gym, which will begin construction this year.

BY DEBORAH MOON
B’nai B’rith Camp was one of 13 camps in North America chosen by the Foundation for Jewish Camp to receive funds in the third round of grants through its Yashar Initiative to increase accessibility for campers and staff with disabilities.
FJC notes this is part of a larger $12 million initiative generously funded by The Harry and Jeanette Weinberg Foundation. Yashar – the Hebrew word for both “level” and “integrity” – is responsible for significant improvements to accessibility and inclusion at camp, providing funds for capital improvements, professional development, staff training, research and evaluation. The Yashar Initiative supports a wide range of campers and staff, including individuals with autism spectrum disorder, as well as those with intellectual, developmental, physical and sensory disabilities. The initiative aims to not only increase the quality of inclusion, but the quantity. Each grant recipient has committed to increasing their total campers with disabilities to at least 5 percent of the total camper population.
BB Camp will use this year’s $100,000 grant toward the construction of its new gym with easy access to the mezzanine-level game room. Similar to the Yashar-funded construction on the camp’s south cabins, the gym will be built into the hillside with an ADA-access bridge leading to the second level. The grant will also fund acoustic siding inside the gym to reduce ambient noise and echoes, which is especially important for children who are easily overwhelmed by sounds.
Before the launch of the Yashar grants through FJC, BB Camp had received funding from the Weinberg Foundation to include a sensory room for campers with special needs when it built the Mercaz Campus Center in 2016.
In 2011, BB Camp began the Second Century Campaign to rebuild the entire campus with the goal of completion by the 100th anniversary in 2021. BB Camp had planned a Centennial Bash this year, but due to COVID this year’s event will be virtual (see below), with an in-person Centennial+One celebration next year.
“It’s all part of our Second Century Capital Campaign to be completed in 2021,” says Aaron Pearlman, BB Camp development and capital campaign director. “We’ve raised $12.3 million of the $14 million goal. By the end of our 100th year, our goal is to complete fund-raising and break ground on our final building.”
“We are expanding our capacity for another century of campers,” adds Aaron.
And thanks to the grants from the Weinberg Foundation and FJC, the campus will be accessible to all campers.
“The Yashar Initiative has been a catalyst for growth over the past two years and, after a difficult year of social isolation and separation, we know that all children, teens and youth need camp this summer more than ever,” says FJC CEO Jeremy J. Fingerman. “FJC is excited to see the continued and growing interest in expanding efforts to serve campers with disabilities, especially during this very trying year.”

BB Camp Bash April 24
This summer marks B’nai B’rith Camp’s 100th year of Building Friendships for life, and  connecting youth with nature, Judaism and each other.
With the ability to gather in person curtailed due to COVID-19 restrictions, BB Camp recognized the unique opportunity to extend the reach of its annual gala, the BB Camp Bash, to its community across the globe with a virtual experience:
BB Camp Bash: Lines of Connection
Online celebration in support of B’nai B’rith Camp
Saturday, April 24, 6 pm PT
Free, but registration required: bbcamp.org/bash/
The evening kicks off with an interactive Happy Hour, where attendees can move freely between virtual rooms to connect with whomever they choose. The entertainment features comedians from across the country, sharing their Jewish camp memories and reading funny camper letters. Three of the comedians are Portland natives Ian Karmel, Ricki Sofer and Amy Veltman. Ricki and Amy have deep personal connections to BB Camp.
Music being an integral part of camp, the Bash will include a Havdalah service led by Kim, Lisa and Stephanie Schneiderman, and a campfire featuring BB Camp song leaders from across the decades.
The Bash is BB Camp’s largest fundraiser of the year, raising money critical to supporting its mission. This year, all gifts up to $150,000 will be matched 1:1 thanks to the All Together Now Matching Grant Program, made possible through JCamp 180, a program of the Harold Grinspoon Foundation, and generous local donors. To give for the Mitzvah Moment, visit givebutter.com/BBCampBash.
For more information, including sponsorship opportunities, please contact Stacey Lebenzon at slebenzon@bbcamp.org.
BB Camp’s much-anticipated Centennial Plus One Celebration will be next year, April 30, 2022, when multiple generations of alumni, family and friends can gather in person for the ultimate celebration of its first 100 years.