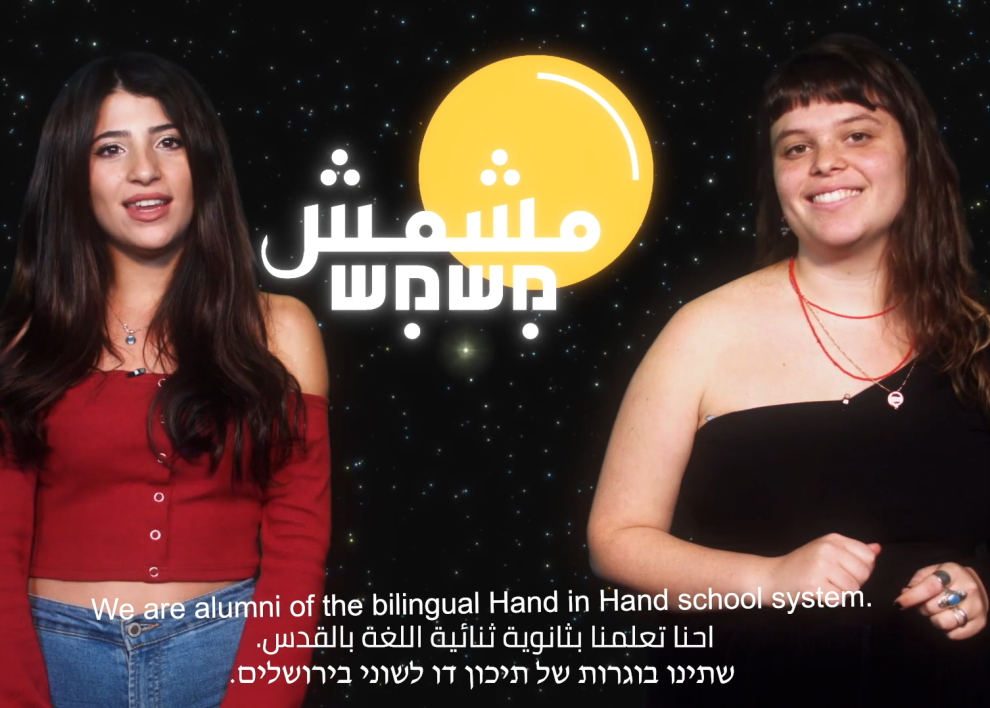 PHOTO: The Hand in Hand alumni network has created a revolutionary web series called Mish Mish. In each episode, alumni hosts Noa and Juman explore pop culture, art, music and cultural identity across Israel. Learn something new and be challenged a bit in each new episode. Check out all the episodes at
handinhandk12.org/mish-mish-episodes/.

BY DEBORAH MOON
A bilingual, multicultural school in Israel cofounded by a Portland native has become a model of coexistence in a time when that approach is in short supply.
Founded with one school in Jerusalem, Hand in Hand now has seven schools throughout Israel, with more than 2,000 students ages 3 to 18. Students learn both Hebrew and Arabic from Jewish and Arab co-teachers.
“Hand in Hand is a model of coexistence – a model people can see works,” says cofounder Lee Gordon. “It’s going to take more than Hand in Hand for reconciliation, (but) we are part of that process to bring people together.”
Gordon cofounded Hand in Hand with Amin Khalaf, an Israeli Arab Muslim, in 1997. The first integrated school opened with one class in Jerusalem the following year. After living in Israel for 20 years, Gordon returned to Portland in 1999 to launch the American Friends of Hand in Hand and to be closer to his then 90-year-old father, William (Bill) Gordon, z”l.
Hand in Hand recently completed a survey of alumni ranging in age from 18 to 28 (see more results at https://handinhandk12.org/alumni_evaluation_2021/). Among other findings, the survey revealed:
• Bilingualism: 89% of HIH alumni report that their knowledge of the other’s language has had a significant positive impact on their perception of the other.
• Multiculturalism: 90% feel it is easy for them to connect with people from different backgrounds than their own.
• Social responsibility: 73% feel that their HIH education provided them the tools to make a positive difference in Israeli society.
As one alumnus from the Wadi Ara school noted, “It’s not just a theoretical discussion of shared society or a limited experience; it’s living shared society every day.” (See more alumni quotes in box.)
“A sizable number of our alumni are really engaged,” says Gordon.
Hand in Hand alumni are highly educated, attending prestigious universities both in Israel and abroad, and are employed in a range of fields, most predominantly education, nonprofit and government. One group of alumni has created a “cultural magazine” online (see photo on page 1). He says past segments have featured a punk band, Palestinian filmmaker and other hip cultural topics.
Just as important as the alumni’s views and actions are the new families who join the schools each year, according to Gordon. “Every year, we add a new cohort of young children, so our foundation has stability.”
During the recent Hamas-Israel conflict, riots erupted in mixed cities in Israel with “mostly young men” on both sides engaged in violent attacks.
“Our older Hand in Hand students were really active in anti-violence vigils,” says Gordon. “Our executive director was invited to speak at the Knesset.”
Gordon says Hand in Hand has far exceeded the founders’ modest expectations.
“We were afraid to dream too big,” he says. “It was such a revolutionary concept. People said no one would send their kids to an integrated school.”
Now the schools are a visible part of Israeli society. The schools are accredited and receive funding from the Israel Ministry of Education in addition to parent fees and international philanthropy.
Hand in Hand students score higher on standardized tests than those at other schools and enjoy a trilingual (students also learn English) education with small classes. “(That) has attracted many parents who would not have met people from the other community,” says Gordon.
Gordon oversees the American Friends office in Multnomah Village with the help of two part-time employees to raise funds and awareness of the multicultural schools. He says many of Portland’s rabbis have visited the schools and taken congregants to see them. Gordon grew up at Congregation Neveh Shalom and joined Havurah Shalom when he returned from Israel. He is also a past board member of the Jewish Federation of Greater Portland.
For more information on the schools, visit handinhandk12.org.