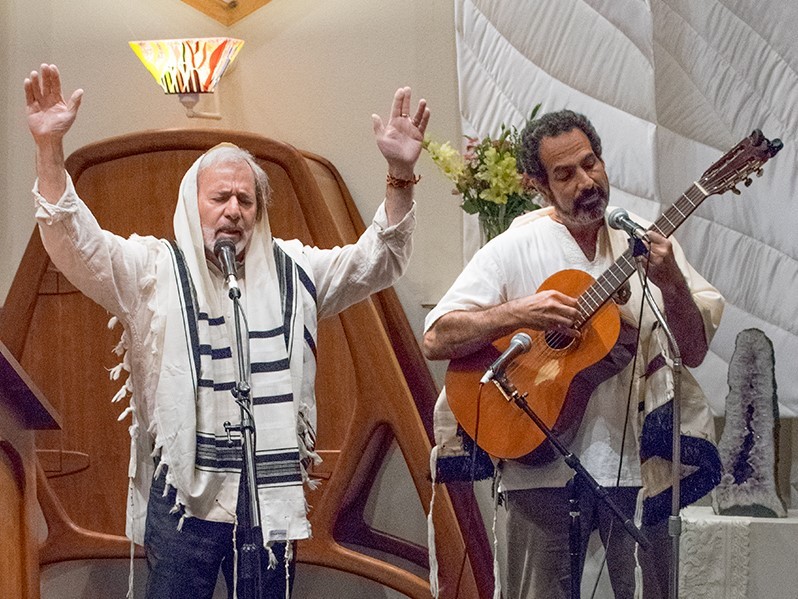 The Havurah Synagogue in Ashland recently celebrated its 36th anniversary as well as the 25th anniversary of Rabbi David Zaslow serving as the spiritual leader of the community.

“Twenty-five and 36 are sacred numbers in Judaism,” says Rabbi David. “It was 36 years ago that Rabbi Aryeh Hirschfield, z”l, organized Havurah Shir Hadash in Ashland, which has since blossomed into a 135-member synagogue.”
July 16 was an extraordinary evening of sharing reflections and memories – and especially honoring Rabbi Zaslow for all he has given over these many years and all that he continues to give the community with his leadership, wisdom and teachings. There were tears of joy and laughter as one speaker after another shared what was in their heart.
Maggidah Ayala Zonnenschein served as master of ceremonies for the evening. Speakers included the mayor of Ashland, Mayor Julie Akins; Rabbi Julie of Temple Emek Shalom in Ashland; Daniel Greenblatt, founding member and council president; and Jonnie Zheutlin, long-time member who celebrated her 95th birthday in August and moved to live with her daughter in Portland. It was a perfect opportunity to honor Jonnie with a beautiful blessing from Rabbi David. Rebbitzen Devorah Zaslow shared a humorous essay she wrote many years ago about being the wife of a jazz club owner/poet-in-the-schools who turned into a rabbi.
Maggidah Cyrise and Stefan Schachter added to the celebration with song. The evening culminated with Kohanim Manny Cohen and Allen Kenner blessing Rabbi David, Jonnie and everyone present with the ancient Priestly Blessing and a beautiful song written by Maggid Jhos Singer based on that blessing.
“Reb Aryeh has given Oregon a special gift with his music, his presence and Jewish Renewal approach to deep spirituality,” says Rabbi David, noting that 10 years after founding Havurah Shir Hadash, the rabbi moved to Portland and founded P’nai Or of Portland.
“It was so special to celebrate our 36th birthday with members and friends  of our community, both in person (before the Delta variant hit us all) and on Zoom,” he adds. “L’chaim, to another 36, and then 36 beyond that!”
It was an event that will live long in the memories of all who were part of it, both physically and virtually. Part of the evening was captured on film and is available on YouTube: youtube.com/watch?v=TNjs7KSp8RY