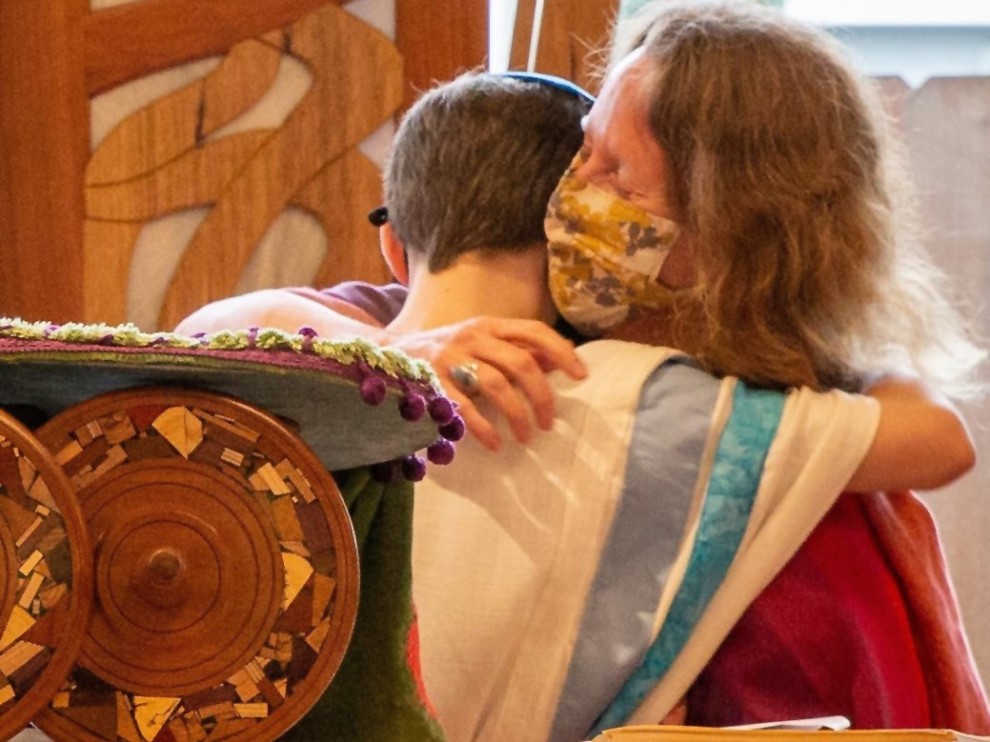 Photo: Gavriel Kedem hugs the scribe of the Torah scroll he read from for his bar mitzvah -- the scribe is his mother, Shoshana Gugenheim Kedem.

When Gavriel Kedem became a bar mitzvah Oct. 21, he read from a Torah scroll scribed by his mother, Shoshana Gugenheim Kedem, the first female commissioned to scribe a Sefer Torah.
“There was never a time in Jewish history where a child knows he has read from a scroll his mother has written,” says Shoshana.
“The art and labor of scribing sacred ritual texts had been forbidden to women for over 3,000 years until I and other women began secretly training and, later, publicly writing,” says Shoshana.
Now she says about 15-17 female and nongender-conforming scribes have written a Torah scroll or Megillah, but most scrolls live far from the scribes.
When the Kadima Reconstructionist Community in Seattle commissioned Shoshana, she was living in Israel. Known as the Women’s Torah Project, a total of six women worked on the scroll with Shoshana as the lead scribe from 2006 to 2010.
From 2013 to 2015, she scribed a second Torah, also scribed collectively by five women as she required to accept the commission.
“In 2016, I moved with my partner and our two young children from Israel, where they were born, to Portland,” said Shoshana. Gavriel is now a seventh-grader at Portland Jewish Academy.
As her son’s bar mitzvah approached, she arranged with Kadima to borrow the Seattle scroll.
“When I think of him reading from it, it makes me cry,” says Shoshana.
“This is why I do what I do – so the next generation can look at us and say ‘I can do that.’”
Her work as a scribe prompted her to launch two other projects. “Women of the Book” features 54 women artists who created visual commentary on the Torah. The exhibit was debuted at the Jerusalem Biennial in 2015 and now resides at the Yale University Arts Library. Her ongoing Or Hadash project is a collaborative effort to bring humanely sourced parchment to contemporary Hebrew scribes.
She says that for the past 50 to 70 years, most parchment has been sourced from fetal calves, a byproduct of the agricultural industrial complex. Before that, most parchments were goat or sheepskin. “I’m working with a parchment maker in New York and a woman in Kansas who raises sheep ethically,” she says.
Read more about Shoshana’s work at shoshanagugenheim.com.