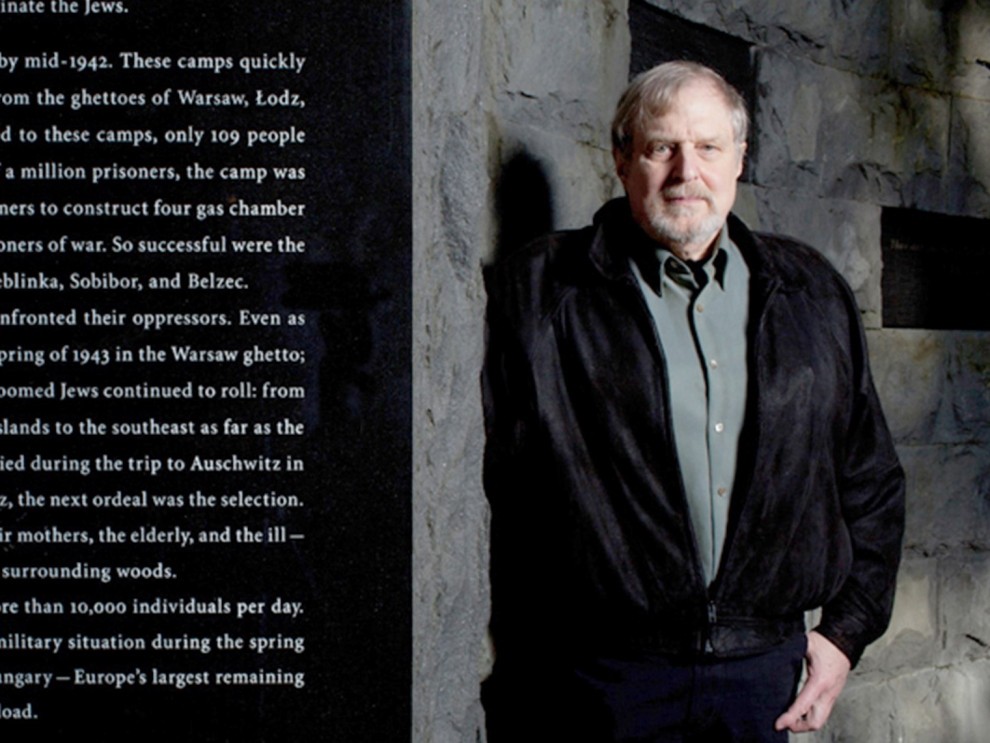 PHOTO: John Laursen was the typographic designer for the Oregon Holocaust Memorial. Photo by Aaron Johanson.

The 2020 Governor’s Art Award recognizes the totality of John Laursen’s 50-year career – but his work on the Oregon Holocaust Memorial is one of his two proudest professional achievements.
John has owned and operated Press-22, a Portland studio specializing in the design and production of high-quality books and text-based public art projects, for four decades. He calls his typographical design work on the memorial and the connections he formed with local Holocaust survivors “transformative.” He now serves as board vice president of the Oregon Jewish Museum and Center for Holocaust Education and sits on the memorial stewardship committee.
Other 2020 Governor’s Arts awardees are jazz musician Darrell Grant, traditional artist Roberta J. Kirk, artistic director Toni Pimble and the Portland Gay Men’s Chorus. The awards will be presented on the Oregon Arts Commission Facebook page at 7 pm, Sept. 12.
“Art is a fundamental ingredient of any thriving and vibrant community,” Governor Kate Brown said in announcing the awards. “Art sparks connections between people, movements and new ideas.”
John’s solutions to three major typographical challenges made the Oregon Holocaust Memorial the type of public art that sparks such connections.
At his first meeting with survivors, they told him they did not want their noncombatant relatives’ names to look like soldiers on a memorial. So he put the victims’ names in family groupings and included their relationship to survivors who moved to Oregon and SW Washington.
“It personalized it,” he says. “Father, mother, sister – everybody knows those words and made it easy to relate to.”
A second challenge was how to make the survivors’ quotes, which would be engraved in bronze, not look like memorial plaques. John scanned and digitized a loose-weave fabric to create an irregular texture on the bronze. This approach had two unintended results – the texture evoked the burlap on straw bales survivors saw at Auschwitz, and when it rains the drops gather on the quote and look like tears falling from the words.
The final challenge was how to incorporate the entire history text written by Marsh Lee. John calls the text a “brilliant distillation” that was “so lean there was nothing to cut.” There also wasn’t enough room on the planned memorial to include all of it. John realized that if one end of the memorial was turned into book pages fanned into Vs, the end would look the same size as the opposite end until visitors walked around and saw the complete text.
“It’s nice to have something that uses all your skills,” says John of the project. “Everything I had learned about typographic design and how to put it into granite and bronze and collaboration to do a project – it was like I had been preparing for that. … It was perfect synergy.”
While his relationships with survivors grew throughout the project, none of them realized he was also a book designer until he designed and co-wrote (with the late Terry Toedtemeier) Wild Beauty: Photographs of the Columbia River Gorge, 1867–1957. That book was the inaugural volume of the nonprofit, Northwest Photography Archive, the two created to publish books of artistically and historically important photographs from the region. It is the second project he is so proud of. It also led to a major exhibition of the photographs at the Portland Art Museum in 2008.
That book inspired survivor Miriam Greenstein, z”l, to ask him to edit and design her memoir, In the Shadow of Death. John became very close to Miriam and dined with her every couple weeks until her death in 2018.
OJMCHE Director Judy Margles says, “John’s multitude of skills have been enormously beneficial to OJMCHE. He joined our board already distinguished as the designer of Steven Lowenstein’s best-selling The Jews of Oregon 1850-1950 and as a member of the design team for the Oregon Holocaust Memorial. He continues to share his talents as board vice president and a valued member of a number of museum committees. John’s devotion to the memorial led to lasting relationships with Holocaust survivors, who count him as a dear and trusted friend.”
John, who previously sat on the board of the Oregon Holocaust Resource Center, served on the merger committee that brought the OHRC together with the Oregon Jewish Museum.
He has remained on the OJMCHE board ever since, explaining that “The mission is really important to me – especially the mission regarding human rights, Holocaust education and standing up to injustice. … We are the museum in Portland and Oregon that stands for those issues.”
“Even though I’m not Jewish, I had an interest in the Holocaust,” he says, adding that interest started in high school when he read John Hersey’s The Wall, a fictionalized portrayal of the Warsaw ghetto uprising.
“I was shocked this had happened, and I was tremendously affected by reading it.”

The public is invited to a virtual commemoration for the 16th anniversary of the Oregon Holocaust Memorial, 4-5 pm, Aug. 29, 2020, via Zoom.
“This is a unique event in that it is virtual, but also because it is being planned by survivors, 2nd and 3rd generations, and even a 4th generation descendant,” says Diana Lindemann, co-coordinator of the Next Generations Group.
To receive a link to the Zoom gathering, email co-coordinator Sue Wendel at suemwendel@gmail.com.
The Next Generations Group includes survivors, descendants and supporters of its mission to keep stories and lessons of the Holocaust alive and relevant.
For more information, visit the Next Generations Group website nextgenerationsgroup.wordpress.com.