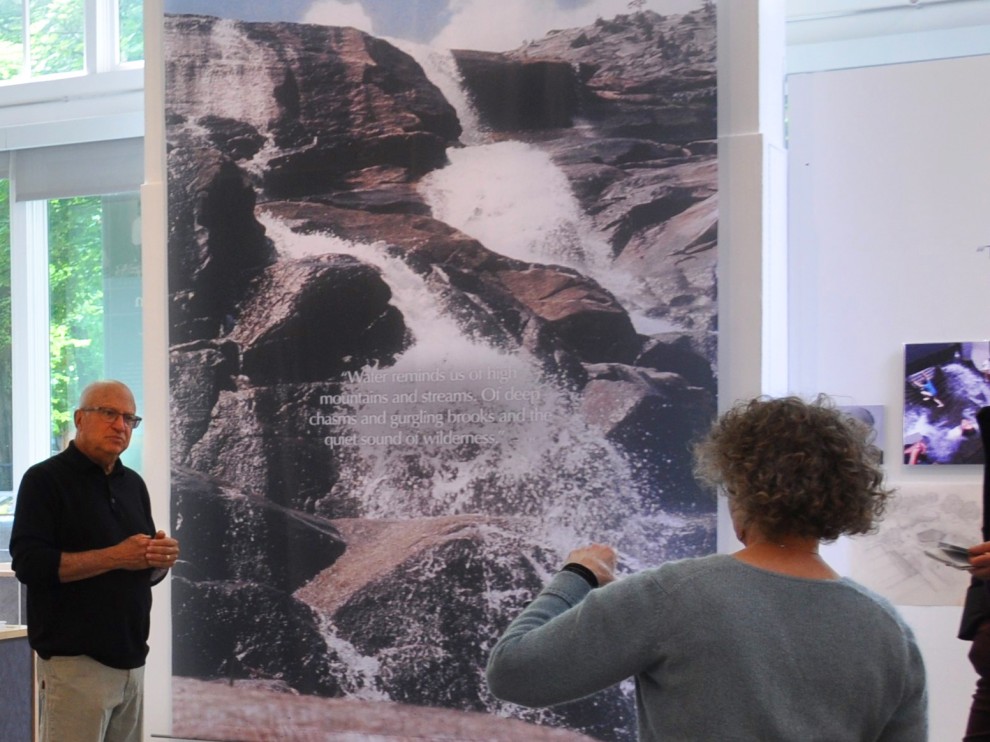 The year’s first indoor exhibit at the Oregon Jewish Museum and Center for Holocaust Education will be an invitation to enjoy the outdoors.
“Lawrence Halprin, Fountains” celebrates Jewish landscape architect Lawrence Halprin and his Portland’s Open Space Sequence, a reinvention of public space in the city’s first urban renewal district, which launched the city’s traditions of world-class public space and urban greenspaces. “South Portland and the Long Shadow of Urban Renewal,” a companion exhibit at the Architectural Heritage Center, explores the immigrant community of Jews, Italians and others lost to that urban development. OJMCHE and AHC members have reciprocal free admission to these exhibits.
The fountains exhibit examines the evolution of the fountain plazas, which became sites of civic inspiration that inspired a generation of Portland leaders and international landscape architects. The exhibit also invites visitors outside to see the actual fountains, just 1.1 miles away.
The exhibit itself is airy and inviting for visitors transitioning from pandemic closures to vaccinated reemergence.
The feel of the outdoors comes inside as sounds of gurgling water flow through the space, and wall hangings of water ripple as the air moves through the room.
“It hits the right chord with its ability to create wide open space,” says OJMCHE Director Judy Margles. “We hope people will come through and return to join a walking tour.”
OJMCHE and AHC will offer guided weekly walking tours of Portland’s first urban renewal project and the Halprin fountains in July and August (tour dates and registration will be posted at ojmche.org/events/). Walking maps will also be available at the museum’s front desk for those who want to explore on their own. The fountains begin with The Source, which evokes the origin of a stream as it bubbles out of the ground before collecting and spilling over the “rocky” slopes of the Lovejoy Fountain. The terraced pools of the Ira Keller Forecourt Fountain invite people to cool their feet in the water.
Guest curator Kenneth
Helphand is the Philip H. Knight Professor of Landscape Architecture Emeritus at the University of Oregon. He says his 45-year career in landscape architecture was inspired by Halprin’s work.
“When I came to the Northwest in 1974, my first stop, the first stop for any landscape architect, was the fountains,” says Kenneth. “The fountains and open space project is the project he is best known for; he is internationally known.”
The author of Lawrence Halprin (part of the Masters of Modern Landscape Design Series), Kenneth is considered one of the foremost authorities on Halprin’s work. On May 25, he presented a virtual lunch talk for the museum titled “Lawrence Halprin: Touchstones and Innovation.” The morning of the talk, Halprin’s wife, choreographer Anna Halprin, passed away. Kenneth says that you can see the choreographic influence Anna had on Halprin’s moving landscape designs. The OJMCHE exhibit is dedicated in her memory. See the video of the talk at ojmche.org/calendar/recorded-events-2021.
Anna also inspired Halprin’s career choice, said Kenneth in a pre-opening tour of the exhibit. Halprin was studying plant science when Anna took him to see Frank Lloyd Wright’s studio and school Taliesin East in Spring Grove, Wisc. Two weeks later, Halprin was enrolled at Harvard studying landscape architecture.
The exhibit includes a brief biography of Halprin, who was born in Brooklyn in 1916 and passed away in 2009. His childhood was divided between New York and pre-state Israel, where he became a bar mitzvah and helped found a kibbutz in the 1930s.
But most of the exhibit focuses on Halprin’s relationship with water and his inspirations for creating the Portland fountains. The three large wall hangings feature Halprin quotes about water in cities. Halprin was inspired by the great fountains of Europe and the public life of Europe’s cities. The flow of the fountains was inspired by his hikes in mountains from the Sierra Nevada to the Cascades and ranges in Europe.
“Lovejoy Plaza is a place for events to happen,” says Kenneth. “He wanted people to engage with the fountains.”
Fortuitously, the city last month turned on the water in the fountains in time for people to enjoy this summer. Portland had turned off the water to all public fountains during the pandemic.
Kenneth is also the curator of the smaller exhibit in OJMCHE’s East Gallery. “Upon Thy Gates, The Elaine K. and Norman Winik Mezuzah Collection” debuted in the museum in 2018. Kenneth has converted the exhibit to a traveling exhibit, and the mounted mezuzot return to OJMCHE June 23-Sept. 26.
OJMCHE: ojmche.org, 724 NW Davis St.
Architectural Heritage Center: visitahc.org, 701 SE Grand Ave.

What a pleasure to read. So many creative people inspiring one another.