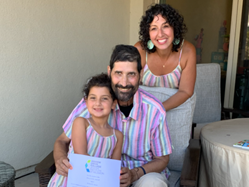 EDITOR'S NOTE: Michael Jeser, z"l, passed away peacefully from esophageal cancer on Shabbat, July 24, 2021. He was 45. The funeral will be 12:30 pm, Wednesday, July 28, near Los Angeles at Mount Sinai in Simi Valley. It will be livestreamed (link posted Tuesday) at https://mountsinaiparks.org/obituaries/.

Hebrew Union College-Jewish Institute of Religion (HUC-JIR) awarded Michael Jeser, a graduate of the Zelikow School of Jewish Nonprofit Management (then School of Jewish Communal Service), with the Sherut L’Am Award on July 6, 2021. The Sherut L’Am Award recognizes exceptional service to the College-Institute or to the Jewish People.
Jeser spent three years as director of financial resource development at the Jewish Federation of Greater Portland, leaving in 2018 to become CEO of the Jewish Federation of San Diego County. In Portland, he oversaw all aspects of the Federation’s annual and supplemental fundraising campaigns. He also created PDX Pathways, JFGP’s flagship leadership development and mentoring program for young Jewish leaders.
“This is a well-deserved honor for Michael,” says JFGP President and CEO Marc Blattner of his former colleague. He was “an exceptional Jewish professional and a tremendous asset to the Portland Jewish community before moving San Diego. The hardest part is that his health is preventing him from doing the work he loves.”
As a fundraiser at heart, Jeser helped to establish the Michael Jeser and Paul Jeser Scholarship Fund at the ZSchool (then SJCS) in 2005. He recently created a very personal fundraiser and introduced it with these words: “Nearly four years after being initially diagnosed with esophageal cancer, I am sadly losing the insidious war being waged against my body and my family. As we prepare for the inevitable, we are all focusing on my quality of life and spending invaluable and unforgettable time together as a family. We are cuddling, hugging and holding each other a little bit tighter. Hugs and kisses from Laura and Eleanore are undoubtedly the brightest part of my day.” Learn more and make a gift at gofundme.com/f/f8p4z-embracing-the-jeser-family.
Jeser was honored for his years of dedicated service to the Jewish people as CEO of JFSDC, which cares for Jews in need, connects San Diego to Israel and strengthens Jewish identity. Past recipients of the distinguished award include Debbie Friedman, Ilene and Stanley Gold, Gideon Kaufman, Deborah Lipstadt and Lenny Thal.
Jeser’s Sherut L’Am Award was presented by Marla Abraham ’85, Director, Western Region, United States Holocaust Memorial Museum, in a private ceremony in the presence of Jeser’s parents Faye and Paul, his wife Laura and his 4-year-old daughter Eleanore, who helped to explode a confetti cannon and shout mazal tov after Abraham presented the award.
Erik Ludwig, Director of the Zelikow School of Jewish Nonprofit Management, said “The Sherut L’Am Award is well-deserved recognition of Michael’s exemplary service to the Jewish people. The professional achievements, the friendships and the quiet repair of a broken world are testament to the sacred intention of Michael’s leadership and his gift to future generations.”
His career has included significant roles in and out of the national Federation system, serving in senior management, fundraising and program positions with Jewish community centers, Jewish summer camps and as the executive director of Hillel at the University of Southern California for four years.