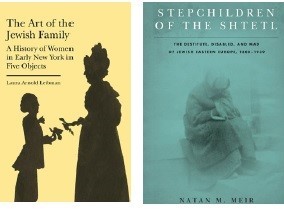 BY DEBORAH MOON
The Jewish Book Council celebrated the work of two Portland professors with last month’s announcement of the winners of the 2020 National Jewish Book Awards, now in its 70th year.
Reed College professor Dr. Laura Arnold Leibman won three categories with her impressive book The Art of the Jewish Family: A History of Women in Early New York in Five Objects (Bard Graduate Center). Professor Leibman won the Gerrard and Ella Berman Memorial Award for History, the American Jewish Studies Celebrate 350 Award and the Women Studies Barbara Dobkin Award.
Fellow Portland scholar Dr. Natan Meir was a finalist for the history award won by Leibman. Professor Meir is the Lorry I. Lokey Professor of Judaic Studies in PSU’s Harold Schnitzer Family Program in Judaic Studies, where he also serves as academic director. Stepchildren of the Shtetl: The Destitute, Disabled and Mad of Jewish Eastern Europe, 1800-1939 was published last July by Stanford University Press.
Both Portland professors look at oft-overlooked segments of the Jewish community. Leibman explores the roles of women in early American society, while Meir reconsiders the place of the lowliest members of an already stigmatized minority in Eastern Europe.
Liebman examines paper fragments, silver cups, miniature portraits made of ivory, “commonplace books” and artistic renderings of family silhouettes to paint a more complete picture of early American Jewish women who have too often been neglected in the scholarly accounts.
“My book is very much about how and why women’s voices get erased, and the role poverty, education, mental illness and racism have played in that erasure,” says Leibman. “It was very important to me, for example, to make sure that I represented the diversity of Jewish women’s experiences, including those of Jewish women of color, rather than just the few women who were financially successful and left good records between 1750 and 1850.”
Though historical, the book seems especially pertinent this year with many women taking the brunt of the pandemic’s economic fallout.
“While obviously things have changed dramatically in the past couple centuries, the pandemic has really brought home to me how much we continue to devalue women’s contributions to society,” says Leibman. “On the one hand, we finally have a female vice president, but on the other hand, even as the economy begins to recover, women of color continue to be left behind and are losing jobs at a higher rate.”
Meir traveled to Jerusalem, Kiev and New York to study archival documents, newspapers and fictional accounts to research beggars, madmen and madwomen, disabled people and poor orphans of the shtetls.
“I’m honored that Stepchildren of the Shtetl was recognized by the Jewish Book Council,” says Meir. “It is a very good feeling when a book that one has poured one’s heart and soul into over a decade is recognized by others, especially an august body like the Jewish Book Council. I’m also deeply honored to be in the company of my friend and colleague Laura Leibman, whose book won the award in the History category.”
Leibman was likewise pleased with the recognition: “I am incredibly honored and humbled to have been recognized by the National Jewish Book Awards this year and overwhelmingly grateful to all the amazing people at Bard Graduate Center who made the book The Art of the Jewish Family possible.”
The 2020 winners will be honored on April 12, 2021, at 4 pm PT, at a virtual awards ceremony. Tickets are available on JBC’s website jewishbookcouncil.org. The website also features a database of current and past National Jewish Book Award winners and finalists. Judges’ remarks on the 2020 winners and finalists will be available on the site after the virtual celebration.