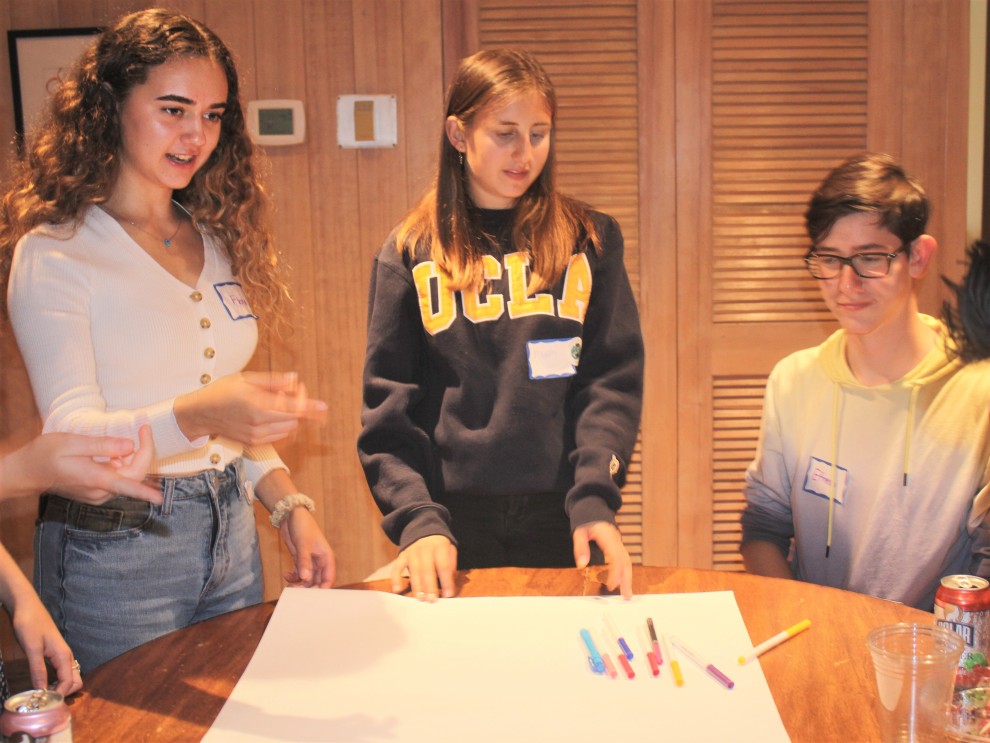 PHOTO: Flora Pollak, Maya Greenfield and Efrem Plauner participate in a visioning process to imagine their ideal world during the kick-off event for Oregon Jewish Community Youth Foundation’s 2019-20 program. By the end of the program year, the 33 teens had to hold site visits and allocations meetings via Zoom.

A recent national study and 17 years of anecdotal evidence from the Oregon Jewish Community Youth Foundation agree: “Jewish teen philanthropy experiences cultivate a lasting desire to change the world while strengthening teens’ connections to Jewish life, community and values.”
In July the Jewish Teen Funders Network released GIVE AND GROW: Jewish Teen Philanthropy’s Unique, Powerful and Lasting Impact, jtfn.org/giveandgrow, which recaps multiple studies of teens participating in community-based teen philanthropy programs.
The impact report includes findings from long-term and short-term surveys and interviews from the 10 communities that were part of the Foundation Board Incubator launched in 2014. Many of the benefits listed in JTFN’s report are supported by the experiences of some of the approximately 350 participants in OJCYF since it was founded in 2003 by Julia Weiss as her bat mitzvah project.
“We’ve experienced all that (survey benefits) with our teens in Portland,” says Julie Diamond, president and CEO of the Oregon Jewish Community Foundation, the parent organization of OJCYF. “OJCYF has been a vital part of our community for 17 years. For teens in their formative high school years, it is incredibly empowering to be entrusted with community dollars to distribute to nonprofits they have studied.”
Following are some of the findings from the Give and Grow report, followed by quotes from past OJCYF participants that reflect those findings:
Jewish teen philanthropy engages teens to think about their Judaism in ways that feel relevant to their lives and dreams for the future.
Claire Rosenfeld, class of 2017: “OJCYF helped me identify my Jewish values and learn how to apply those principles to my giving. Through OJCYF,
I realized that Judaism is much more than a faith or a belief, it’s a value system that can help you guide your behaviors and actions.”
It challenges teens to work with Jewish peers and build consensus by presenting their views, listening to others and compromising.
Blake Morell, 2004-09: “The allocation meetings were a key part of the leadership development. First, everyone has 3-5 minutes to present the organization they met with (this is before we did RFPs). Of course, after visiting an organization and spending time on the mission, everyone pitched the max donation for their group. So it was important to be able to deliver a great presentation for the organization. From there, you had a group of about 20 teens needing to learn how to compromise and come up with an allocation pool everyone could agree on.”
It empowers teens to make decisions that are consequential for communities and issues they care about.
Jonah Zeigman, class of 2018: “By keeping the Jewish values that I’ve been taught by OJCYF at my core, I have the ability to combat anything from climate change to hate speech on campus, while doing so in a kind and productive manner.”
Teens gain a stronger Jewish identity and sense of connection to the Jewish community and a sense of contributing meaningfully to their local communities and Jewish communities abroad.
Allie Rosenfeld, class of 2017: “OJCYF allowed me to connect with other Jewish high school students with similar values and goals to me. The program opened my eyes to the responsibility that we have to our Jewish community and the impact that we can have.”
They gain leadership and communication skills, with experiences relevant to their futures, and the inspiration to become changemakers.
OJCYF Founder Julia Weiss to recent graduates: “OJCYF helped me discover my love for philanthropy not just by giving money, but by giving my time to those in need. Giving back to my community didn’t stop after OJCYF for me and doesn’t have to for you either. I challenge you to seek out programs in college that you can be passionate about, and if they don’t exist, create one! You guys now have the tools and experience with philanthropy and know what it means to give while aligning with your values and beliefs. You have learned how to work as a team and compromise on a board of strong, passionate individuals for the betterment of the community.”
Following college, Julia returned to Portland and participated in the OJCF Giving Council. Earlier this summer, she and her husband, Grant Smith, had a daughter, Ramona “Roma” Aubrey Smith.
The teens aren’t the only beneficiaries – OJCYF has granted about $600,000 to community nonprofits since its founding. The 2019-20 cohort made grants of more than $66,000 to 43 projects.
“These funds are raised by the teens, who learn the skill of advocating for what they believe in,” says Julie.
“Every year we had two to three times the fund requested versus the money to give, so we wanted to make a conscious effort to fund-raise more,” says Blake Morell, a 2004-09 participant who recently earned his MBA at Wharton. “Cold calling isn’t something that naturally comes to me, but you do it because we felt passionate about the cause. Getting outside your comfort zone, in this case “selling” someone to do something (in this case donating), is something that nearly everyone does daily in our lives.”
Much of the money the Oregon teens distribute is raised during the OJCYF Annual Benefit Dinner, perhaps the only such event in the country.
“Parents, educators, clergy and donors love to see the teens in action at this event,” says Julie.
The teens plan and run the event, which this year was canceled due to the pandemic. In normal years, the teens learn organizational skills as they keep track of all the vendors and plan the program, dinner and auction. During the event, the teens share how their Jewish values inform their grant-making.
“We have some awesome alumni who have continued on to be involved in philanthropy at so many levels – board work at both Jewish and non-Jewish organizations, committees and with our OJCF Giving Council,” says OJCF Program Officer Sonia Marie Leikam, who staffs the youth foundation. She adds it is wonderful to see “them come back to Portland post-college and watch them get involved in the community.”

Applications for OJCYF open
This year the Oregon Jewish Community Youth Foundation will be an online program, so Jewish teens from all over Oregon and SW Washington are invited to participate. Teens will meet in a cohort of 15 every other Sunday starting in October via Zoom.
OJCYF provides teens with a Jewish framework to explore their interest in social justice and give them tools to build a better world. OJCYF is a program designed to encourage a lifelong passion for Jewish philanthropy and create deeper connections to the Jewish community.
Interested teens in grades 9-12 can find more details and apply at ojcf.org or email youth@ojcf.org.