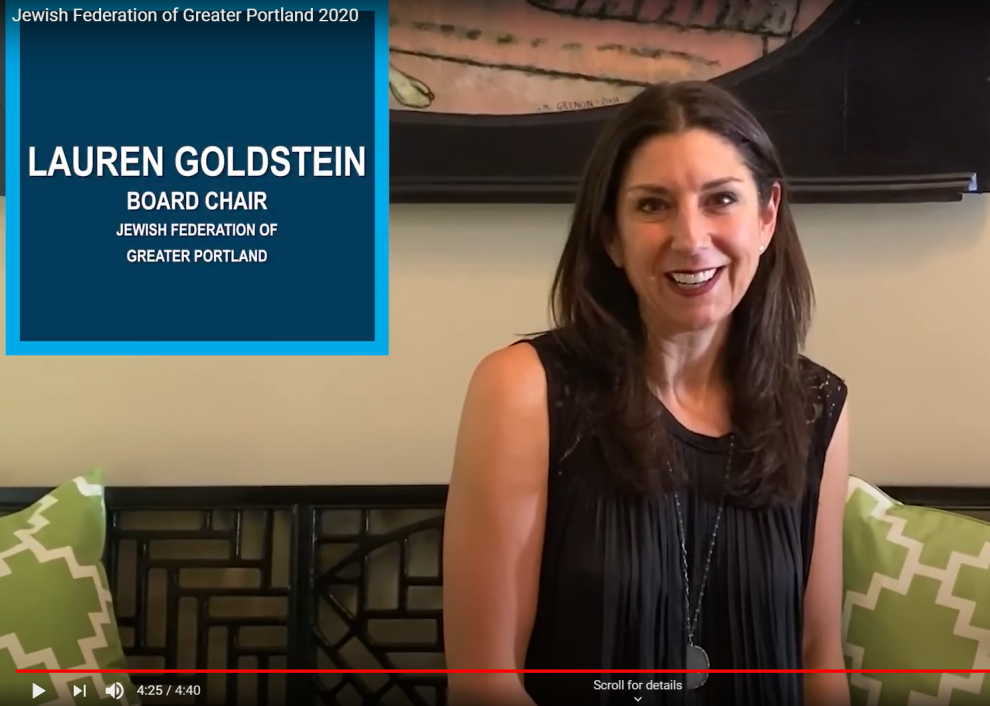 The Jewish Federation of Greater Portland’s 100th annual meeting on June 16 reflected our changed world and how the Jewish community has rallied to aid individuals and organizations in these tumultuous times of COVID and protests. With 144 households on the Zoom webinar, the centennial meeting was the largest in recent history.
The larger turnout was one of several “silver linings” JFGP Board Chair Lauren Goldstein shared during the evening.
The opening montage of video clips from leaders of the Oregon Board of Rabbis, Jewish Family & Child Service, Cedar Sinai Park and B’nai B’rith Camp, and community members reflecting on the community’s response culminated with Goldstein sharing the Federation’s rallying cry for the year, “When We Come Together as a Community, Great Things Happen.”
Goldstein offered a swift roundup of the community’s successes over the past year, both before and during COVID. She noted that when we began the year July 1, 2019, Federation was putting the finishing touches on the community Israel trip as the centerpiece of its centennial year. “In the fall, we were gathering together in vibrant groups” for inspirational gatherings featuring Chef Michael Solomonov, Ambassador Dennis Ross and Notorious RBG author Irin Carmon. Pre-pandemic, she said, “We (Federation and Wexner) identified 20 incredible changemakers from our community to participate in a leadership development program, which we now look forward to starting soon.”
When the world changed in mid-March, “It was our time to pivot, and our Jewish Federation changed literally on a dime,” said Goldstein.
On March 16, the JFGP Board met in emergency session on Zoom and committed $250,000 from reserves to launch a crisis campaign. A day later, Oregon Jewish Community Foundation committed $100,000 to partner with Federation on the Greater Portland Jewish Community COVID Emergency Fund. Within two weeks, the grant process had begun. With donations from individuals, the fund has raised $867,000 and granted $697,000 to 36 organizations in Oregon and SW Washington – “a true representation of great things happening.”
She called the crisis campaign, “A crowning moment of our Jewish community, who came together during this trying time … to make sure every agency and individual was taken care of.”
Even during the crisis campaign, the community responded and the Jewish Federation’s total resource development this year totaled $4,641,823 so that all agencies will receive the same allocation they received last year.
Goldstein added the community also came together to make great things happen through three strategic community priorities: community engagement, maintain security, and elevate messaging and communications. She emphasized that engagement was targeting agencies, synagogues, rabbis, individuals we know and don’t yet know – “all of our constituents.”
The polling feature on Zoom was used to confirm the nominating committees’ nominees for four new board members: Sarah Rosenberg Brown, Les Gutfreund, Alan Montrose and Eliana Temkin.
Guest speakers were Jewish Federations of North America President and CEO Eric Fingerhut and Wexner Heritage Director Rabbi Yaffa Epstein; both spoke about the importance of leadership for a community’s success.
“We know we are at a time of change – we are having the 100th annual meeting … by Zoom,” said Fingerhut. “We know our work is going to help determine what it (the future) is going to look like.”
Fingerhut said that the federation system and Portland “have the leadership we need.” He said that JFGP President and CEO Marc Blattner “is known across the federation system – he is respected, he is listened to … we trust him to help lead us.” As an example of that, Fingerhut said when the crisis hit in mid-March, federation executives on a Zoom call wondered when aid would be needed. “Marc said, ‘We are acting now.’” Fingerhut said the other execs quickly followed Portland’s lead to launch a crisis campaign.
Blattner wrapped up the meeting by sharing insights and major accomplishments of the past year. He congratulated the five winners of the Sussman scholarships and the winner of the Rogoway Outstanding Jewish Professional Award (see article on award winners in the May 27 issue: jewishportland.org/jewishreview/jr-stories/untraditional-awards-ceremony
To help expand the strategic priority of community engagement, Federation has created a Young Adult Board “to engage even more people,” said Blattner (see related story).
He called the reboot of The Jewish Review, originally published by Federation from 1959 to 2012, a highlight of the year. “After an eight-year hiatus … it returned online to great readership, up-to-date information and a great reception.”
He praised the work of Women’s Philanthropy and the JCRC – which has strengthened Jewish community ties with the African-American community and been involved in combating the resurgence of anti-Semitism.
The postponement of the Israel trip for 400 people was the year’s biggest disappointment, said Blattner, adding, “I hope all will come with us when it’s rescheduled and that new people will join.”
At no additional cost, the Federation also moved into new office space at 9900 SW Greenburg Road in May, though staff is still working remotely due to COVID restrictions.
Blattner said he is privileged to work with an “outstanding Executive Committee – Lauren Goldstein, Ted Nelson, Jack Birnbach, Jim Meyer and Ed Tonkin” and “12 other professionals on a daily basis who are making a difference … together with our partner agencies, synagogues, rabbis” who make Jewish Portland what it is today, during COVID and post-COVID.
Watch the opening montage video shown at he meeting:  youtu.be/r6nI-Q9xo20.

New Board Members
Sarah Rosenberg Brown
Originally from Albuquerque, NM, Sarah has lived in Oregon 26 years. She dedicated over 12 years of her professional life to nonprofit work, started two small businesses, and now is a consultant with The Peak Fleet focusing on community building and social/racial equity.
Les Gutfreund
A Detroit native, Les relocated his family to Salem in 1994. After being very active in the Salem Jewish community, he moved to Portland to marry Eve Stern in 2010. Les works as a general contractor and chairs Jewish Free Loan of Greater Portland.
Alan Montrose
Alan was born in Portland. He has had a dental practice in Beaverton, called Smiles Northwest, for 37 years. Alan and his wife, Debbi, have two children and one granddaughter. He has served on Federation’s Allocations Committee, and presently serves on the board of Congregation Neveh Shalom.
Eliana Temkin
Eliana moved to Portland from California in 1988. After 16 years as a Jewish communal professional, Eliana works for Kaiser Permanente as an organizational effectiveness consultant. As a member of Havurah Shalom, Eliana has served on the Rabbi Search Committee and as co-chair the Long-Range Planning committee. She serves on Federation’s Allocations Committee. She and husband, Alan Springs, have three sons.

Lauren Goldstein, Chair: As a Chief Revenue Officer, Lauren helps marketing and sales leaders at growth-focused organizations transform their demand marketing to drive revenue growth and excellent customer experiences. Lauren cofounded Women in Revenue, a nonprofit built to empower women in sales and marketing with education, mentorship and networking opportunities. Lauren has served on the Federation board in different leadership capacities for more than 15 years.
Leslie Beard: Leslie is originally from Milwaukee, Wisc., and has lived in Portland for 30 years with husband, Peter, and their four children. She works as a physical therapist at Emanuel Hospital specializing in adult neurology and is also a member of their clinical ethics consultation team.
Emily Benoit: Born in Upstate New York, Emily moved to Florida when she was 10. She moved to Vancouver, Wash., in 2016 and quickly became involved with the greater Portland Jewish community. Emily has worked for city, state and county governments and now works as a transportation planner in the private sector.
Jack Birnbach: Jack grew up in Portland and attended Neveh Shalom and Camp Solomon Schechter. He currently chairs Federation’s Allocations Committee. Previously, he was Federation’s Treasurer and a member of the Pathways mentor committee. He is a member of the Jewish Community Response to COVID-19 Steering committee.
Karen Blauer: Currently on the board of the Eastside Jewish Commons, Karen has had a leadership role at Jewish Family & Child Service, Mittleman Jewish Community Center, Cedar Sinai Park and B’nai B’rith Camp. In 2019 she won Metro’s Bill Tolbert Diversity award for leading outreach efforts to engage marginalized communities.
Debbie Frank: Debbie’s diverse career spans from politics to helping start a statewide nonprofit to PR work and sales strategy for social venture and internet companies. She runs a corporate gifting company called The Right Promotions.  She founded a meetup group called PDX MOTS (Members of the Tribe) in 2014.
Simon Gottheiner, ex officio, JFGP rep to OJCF: Simon emigrated to the U.S. from South Africa at age 5 and grew up in Palo Alto. After 12 years in various sales and marketing positions at Intel, Simon joined his wife, Janine, and sister-in-law, Lee Lazarus, at The Presentation Company, LLC.
Rick Haselton: Rick is an Oregon native. He served on the Oregon Court of Appeals from 1994 until retiring in December 2015 as Chief Judge. Rick and his wife, Sura Rubenstein, are long-time members of Kesser Israel. Their daughter graduated from PJA.
Jessica Hilbert: A native of Wilmington, Delaware, Jess has lived in Oregon 10 years, in Portland since 2014.  She is a co-founder and General Counsel of Red Duck Foods. She and her husband, Matt, enjoy travel with daughter, Kayla. She is a member of the JFGP’s Women’s Giving Circle.
Hank Kaplan: Hank came to Portland in 1981 for a one-year clerkship with the Hon. Gus Solomon. He practices labor and employment law with Bennett Hartman, LLP.  Previously chair of  Federation's Jewish Review Committee, he is now Legislative Advocacy Committee Chair of the JCRC. He and wife, Marni Glick, have two grown daughters, both PJA grads.
Ronnie Malka: Born in Israel and brought up in Los Angeles, Ronnie moved to Portland 20+ years ago. Along with husband, David, she owns Malka Diamonds & Jewelry in downtown Portland. They have two daughters, Ellie and Maya. Ronnie chaired the campaign to raise funds for Rachel’s Well Community Mikvah.
Jim Meyer: Jim moved to Portland from Boston with his wife, Lora, in 1960; they have three sons and eight grandchildren. A long-time investor in Portland small businesses and real estate, he is now semi-retired. Jim has been involved with Federation since 1966, including as board chair 1970-72 and  campaign chair 1988-89.
Ted Nelson, Campaign Chair: Ted has lived in Portland since he was 13. A CPA for over 30 years, he is head of finance for a business unit that is part of a large Swedish-based paper company. He was as Board President of Congregation Beth Israel 2016-2018. He has served on the Federation Board since 2018. He has two children and two grandchildren.
Jeff Robinson: Jeff is professor and chair of the Department of Communication at Portland State University. Jeff moved from New Jersey to Portland in 2009 with his wife and two daughters, who attend PJA. They belong to Congregation Neveh. He has volunteered for the Federation in various roles over the last 10 years (e.g., chairing Super Sunday and the Allocations Committee).
Ed Tonkin, Immediate Past Chair: Eddy is a Portland native, affiliated with Congregation Beth Israel. He received his J.D. of law in 1979 from UW and practiced law in Portland before joining the family automobile business. Eddy chaired National Automobile Dealers Association in 2010-11. Eddy has served on boards of several charitable organizations. He is married to Michelle and has two kids and one grandson.
Mark Zeitzer: Mark was born in Phoenix. He and his wife, Mindy, moved to Portland in 2008 to raise their family. They have three sons, who attend Portland Jewish Academy. Marc is an emergency physician and the Medical Director of Acute Care Services at ZOOM+Care. They belong to Congregations Neveh Shalom and Kesser Israel.  Mindy and Mark chaired the Federation Campaign Kick-Off event in 2013 and chaired the Federation Campaign from 2016 to 2019.