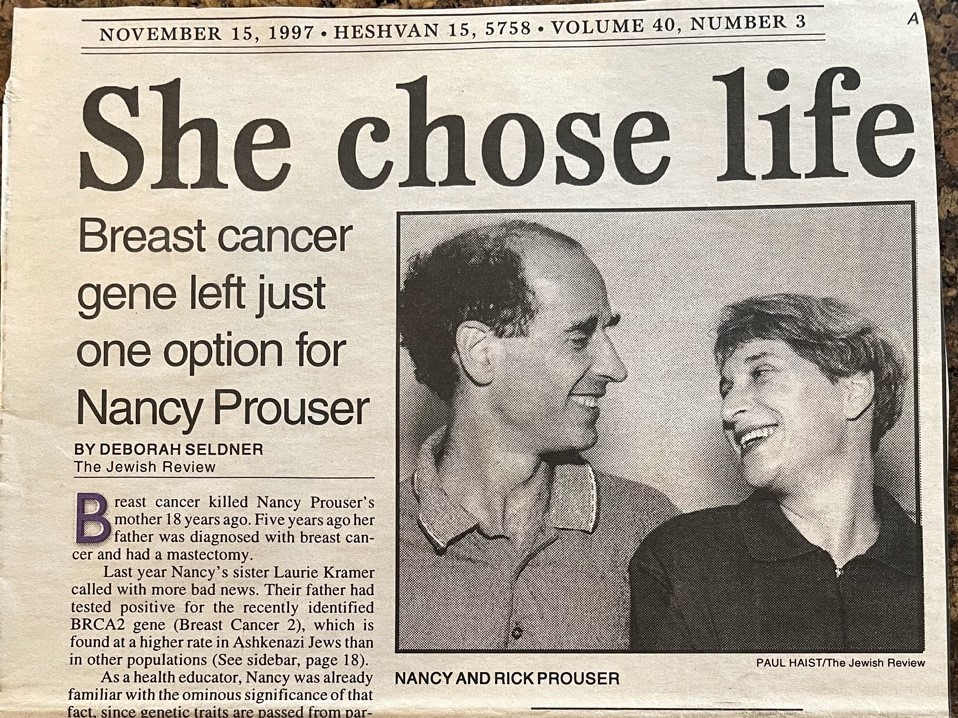 PHOTO: In 1997, Portlander Nancy Prouser took a then relatively new genetic test after her father tested positive for a BRCA mutation. He was screened after he developed breast cancer. Prouser’s mother died of breast cancer when Prouser was just 28. This article in the Nov. 15, 1997, Jewish Review shares her journey. Now cancer screening is easier thanks to a national initiative from JScreen.

JScreen, a national public health initiative based out of Emory University School of Medicine’s Department of Human Genetics, has announced a new program that will offer at-home testing for more than 60 cancer susceptibility genes associated with hereditary risks for breast, ovarian, prostate, colorectal, skin and other cancers.
When the Jewish Review was a print publication from 1959-2012, it often covered the evolving field of genetic screening. The paper ran multiple stories about Nancy Prouser, who lost her mother to breast cancer 41 years ago but used genetic screening to avoid the same fate, and Sherie Hildreth, who didn’t learn she had a BRCA mutation until after her diagnosis of ovarian cancer. (see below)
“Making cancer genetic testing accessible is key,” said Jane Lowe Meisel, MD, Associate Professor of Hematology and Medical Oncology at the Emory University School of Medicine and medical director for JScreen’s cancer program. “This type of testing is important because it alerts people to their risks before they get cancer. They can then take action to help prevent cancer altogether or to detect it at an early, treatable stage.”
Until now, JScreen’s focus has been on reproductive carrier screening for diseases such as Tay-Sachs that occur more commonly in the Jewish population, as well as diseases such as cystic fibrosis that are common in the general population. JScreen has tested thousands of participants and given high-risk couples essential information about options to help them have healthy children.
JScreen heard from members of Jewish communities across the United States that they were interested in genetic testing to assess personal cancer risk. Their concerns stemmed from the fact that Ashkenazi Jewish men and women face a 1 in 40 risk of carrying mutations in the BRCA1 and BRCA2 genes; this is more than 10 times the risk in the general population. Ashkenazi Jews are at increased risk for carrying these mutations even if they do not have a personal or close family history of BRCA-related cancers.
To meet this need, JScreen and Emory’s Winship Cancer Institute launched the Atlanta PEACH BRCA pilot study in July of 2019 to assess interest in testing for the BRCA genes. Through this study, JScreen offered at-home BRCA testing to eligible Ashkenazi Jews aged 25 and older. The study enrolled more than 500 eligible participants in less than 6 months. The results of this study confirmed interest in at-home cancer genetic testing for BRCA and other cancer susceptibility genes and helped inform best practices for the national launch of JScreen’s cancer genetic screening initiative.
“I never even thought to get screened until I learned about JScreen’s study in Atlanta last year,” says Karen Smerling, age 62, of Atlanta. “After I underwent screening, I found out I was BRCA2 positive. I chose to have a bilateral mastectomy before cancer could possibly come my way. JScreen did indeed save my life and can do so for others who take the first steps toward genetic testing.”
“Knowledge is power. With an understanding and awareness of their cancer risks and available options, individuals can work with their health-care providers on next steps,” said Karen Arnovitz Grinzaid, MS, CGC, Assistant Professor of Human Genetics at Emory University School of Medicine and JScreen’s Executive Director. “Launching our new cancer program and providing convenient and affordable access to cancer genetic testing will help save lives. We are thrilled to bring this important resource to the Jewish community.”
When Nancy Prouser learned she was BRCA positive and elected to have a bilateral mastectomy in 1997, the tests were new, and she says she felt isolated by her decision. Since then, studies have shown prophylactic mastectomies and oophorectomies are effective and are among the options available to those with a mutation. She is glad that screening is more accessible and more information and support are available so others with the mutation can chose the best option for themselves.
Visit JScreen.org for more information.

The SHOC Foundation will host its second virtual event with the 17th Annual SHOC Walk & Run in support of ovarian and gynecologic cancer research Aug. 7. As the damaging impact of COVID-19 continues to shift how we navigate everyday life, the SHOC Foundation is committed to upholding its mission to raise funds for ovarian cancer research. A lifelong member of Congregation Beth Israel, Sherie Hildreth, z”l, had a BRCA mutation. She founded the Sherie Hildreth Ovarian Cancer Foundation in 2005 to support ovarian cancer research and awareness. Since its founding in 2005, SHOC has donated nearly $1.2 million to support ovarian and gynecologic cancer research at the Oregon Health & Science University Knight Cancer Institute, located in SW Portland.
For questions, email walk@shocfoundation.org.
Register: shocfoundation.org