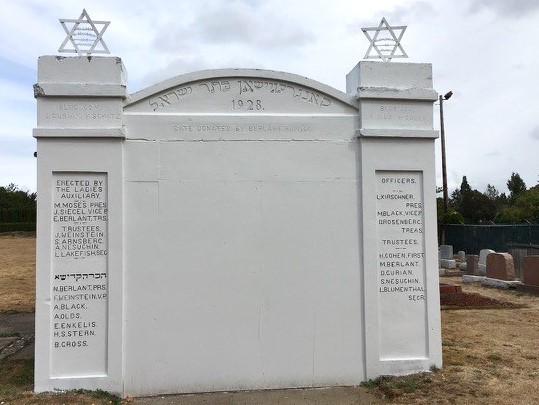 PHOTO: The Chevra Kadisha (Jewish Burial Society) Building was erected in 1928 at the Kesser Israel cemetery. Under a bill recently signed into law by Governor Kate Brown, Kesser Israel now qualifies as a historic cemetery.

Under a new law that changed the designation for historic cemeteries to those 75 years or older, the Kesser Israel cemetery joins a handful of other Jewish cemeteries in the Portland area already designated historic.
Governor Kate Brown signed into law a bill that extends the historic designation beyond the original date of Feb. 14, 1909. The Oregon Commission on Historic Cemeteries, housed within Oregon Heritage in Oregon Parks and Recreation Department, has worked toward this change for more than a decade. The new law designates a historic cemetery as “any burial place that contains the remains of one or more persons who died before the date that is 75 years before the current date.”
A press release from the commission estimates 180 cemeteries are eligible for listing under the new date. Jewish cemeteries already listed as historic include Ahavai Shalom and Neveh Zedek/Talmud Torah cemeteries of Congregation Neveh Shalom, Congregation Beth Israel cemetery and Congregation Shaarie Torah cemetery. Historic cemeteries with Jewish sections include River View Cemetery in Portland, Lake Oswego’s Pioneer Cemetery, Eugene Masonic Cemetery, Jacksonville Cemetery and Waverly Memorial Park near Albany.
“We are delighted with the legislature’s passage of HB 2123 – introduced at Governor Brown’s request – which makes it possible for the Congregation Kesser Israel Cemetery to be included among Oregon’s historic cemeteries,” says Sura Rubenstein, the Orthodox cemetery’s volunteer manager.
The Orthodox Jewish cemetery, located in Southeast Portland, was established in 1924 and had its first burials in 1925. Many of the earliest of the 300-plus burials in the cemetery are of immigrants from Poland and Russia. They came to Oregon in 1890-1924 as part of the great waves of Jewish
immigration seeking better lives for themselves and their families. In some cases, the stories of the people in the cemetery tell of hardships and sorrows.
“Although we do not have notable people among the burials, the cemetery tells more of a ‘people’s history’ of Jewish life in Oregon,” says Sura. “We are looking forward to working with the Commission on Historic Cemeteries on issues of preservation, restoration and long-term planning for the cemetery’s future – and are grateful for the opportunity.”
Kesser Israel’s cemetery has a Chevra Kadisha Building, erected in 1928, which was likely used for preparations of deceased for burial according to Jewish traditions – washing (“purification”) and dressing in shrouds before placing in caskets. Inside, there is a central concrete platform where the preparations would take place. In recent years, the building has been used for storage. The left pillar notes that it was erected by the Ladies’ Auxiliary of the Chevra Kadisha, whose names are at the bottom of the pillar. The congregation assumes the “officers” listed on the right pillar are officers and trustees of the congregation.
The seven-member Oregon Commission on Historic Cemeteries was established to maintain a listing of all historic cemeteries and gravesites in Oregon; promote public education on the significance of historic cemeteries; and help obtain financial and technical assistance for restoring, improving and maintaining their appearances.
The commission recognized that many cemeteries didn’t qualify under the original designation, which was based on establishment of Oregon as a state on Feb. 14, 1859. Designated historic cemeteries are eligible for grants and other protections under state law. The commission found many cemeteries that did not qualify still had historic significance. The commission recognized that historic value and significance changes over time. So, the rolling date became the goal.
Operating cemeteries are not required to list as historic with the commission, but they are eligible. For information on historic cemeteries and available resources and to designate a cemetery, visit http://www.oregonheritage.org or contact Kuri Gill at 503-383-6787 or kuri.gill@oregon.gov.