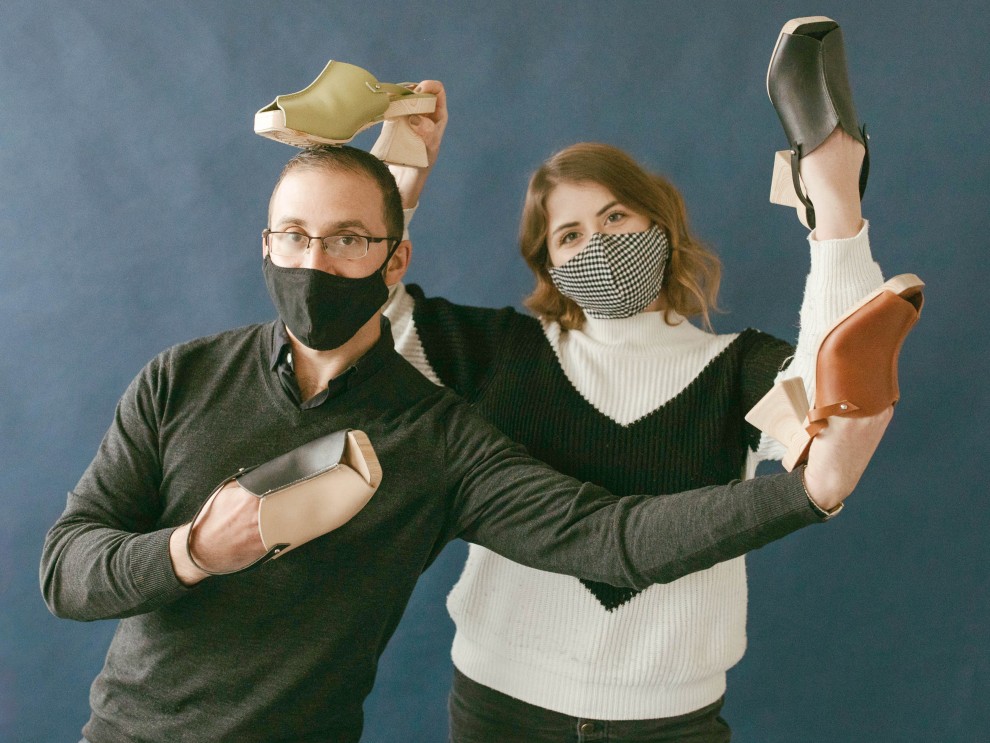 PHOTO: HILOS co-founders Elias Stahl and Gaia Gialadi show off the shoes that impressed the venture capital judges at PitchFestNW.

HILOS won PitchfestNW, part of TechFestNW, held online Dec. 2-4. HILOS co-founder and Chief Executive Elias Stahl is a member of the Jewish Federation of Greater Portland's Israel Advocacy Committee and Congregation Neveh Shalom's Israel360.
HILOS creates made-to-order, digitally manufactured shoes.
“Being awarded winner of TechfestNW’s Pitchfest competition by the most prominent and savvy investors in the PNW is an incredible honor,” says Elias. “It’s reaffirmed why we’re so lucky to be building HILOS in Portland, where we’re fortunate to have an incredible community supporting us and where our vision for zero-waste footwear has really resonated. Together with a few other exciting announcements we’ll be making over the next few weeks, we’ve got the momentum, the team and the infrastructure in place for an exciting commercial debut. The way we make and buy will never be the same.”
More than 60 startups from around the world pitched their visions to a panel of venture capital judges, with HILOS announced as the winner Dec. 4.
The other five finalists were YesOMS, Heal Mary Technologies, Steamchain Corp., Findster Technologies and KYTE Systems.
Elias and co-founder Gaia Gialadi are Israeli-Americans. Elias made aliyah to Israel from California in 2012 and served in the IDF. He and his wife, Kristen, moved to Washington, D.C., while Elias earned his master’s at Johns Hopkins. The couple moved to Portland and joined Congregation Neveh Shalom. They had their first child this summer. Harvey Stahl was born Aug. 3, 2020, the day before his dad's birthday.
HILOS was featured in the Jewish Review in May when it shifted its prototype printers to producing personal protection equipment. Read the article at jewishportland.org/jewishreview/jr-stories/from-shoes-to-ppes.