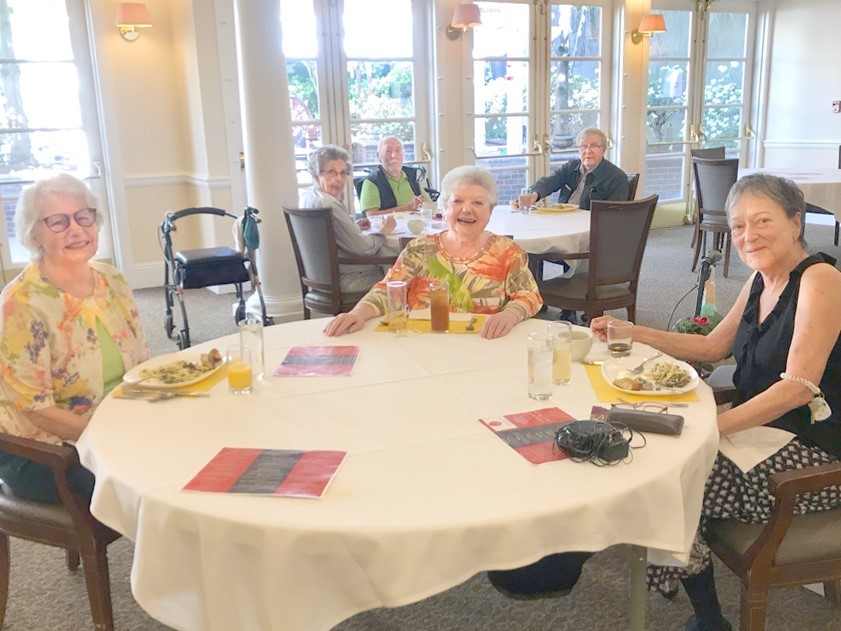 Current and prospective residents of Rose Schnitzer Manor are delighted that things are opening up after a year of COVID restrictions.
Residents are enjoying dining together in the dining rooms with extended hours and a full menu featuring some new offerings by new Executive Chef Andy Staggs. Her recipes for housemade veggie burgers and easy-to-hold sliders have been a big hit.
Many seniors who had been considering moving to the Manor put their plans on hold when COVID struck.
“One of the deterrents for people was that we had a lot of restrictions, and it was so closed off,” says Polina Munblit-Gregg, assistant administrator of RSM, which sits on the Cedar Sinai Park campus. “We weren’t able to have visitors in the building, the dining rooms were closed and we didn’t have activities – so a lot of people were holding off and staying at home, because what was the point of moving into senior living and not being able to experience all that it typically has to offer.”
Now the Manor is again offering those amenities and people are noticing.
“Just naturally people are calling more because they know that,” Polina says. “They’re just feeling more comfortable with moving in.”
So RSM is offering a $500 credit toward new residents’ moves to the Manor when they use Managed Moves, a full-service downsizing and moving company that has served seniors since 2006.
“Our Spring Move-In campaign emphasizes the opportunity to live life to the fullest at any stage, with as much support or independence as one needs,” says Dru Rosenthal, CSP director of development & communications. “Why move to RSM? Our why showcases the love, honor and respect provided to our loved ones.”
In addition to the open dining rooms, the popular Marcie’s Bar reopened this week to serve cocktails and appetizers. There will be social distancing and a cap on the number of people in the bar area, but residents are excited.
“You can tell there’s just a whole different mood in the building – a lot more cheerful, everyone’s a lot happier,” says Polina.
Andy says that residents are really enjoying ordering from a full menu when they sit down to eat, rather than having to order meals the week before from a limited menu.
“We have a super selection on the menu,” she says. “The most popular item has been omelets. An omelet was not feasible for room service – we offered lots of scrambled eggs for delivery.”
Andy, who has worked in CSP food service since January 2020, became CSP executive chef and director of dining services on April 9.
“I don’t like processed food on the menu,” she says, so she replaced the commercially ordered veggie burgers that have a lot of sodium with her own recipe featuring brown rice, black beans and beets. The recipe also reduces waste because, typically, unused brown rice would be discarded at the end of the day.
She also introduced sliders when she heard some residents have trouble holding the full-sized Manor Burgers on the menu.
“A lot like the smaller slider – they are not overwhelmed by size of the entrée, and it’s easy to hold,” she says.
For more information on the move-in special and a virtual or in-person tour, call Polina at 503-535-4004.