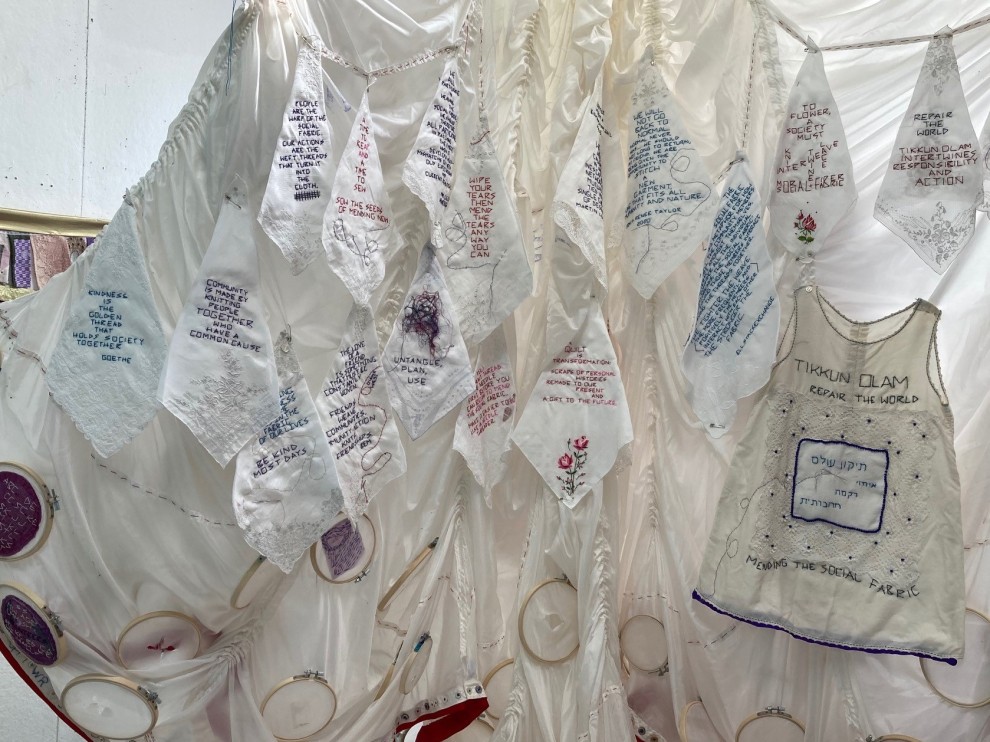 PHOTO: Artist Bonnie Meltzer included three baby dresses in her exhibit on Mending the Social Fabric because she believes we repair the world for the good of the next generation.

BY DEBORAH MOON
When “Mending the Social Fabric” opens Oct. 7 at the Oregon Jewish Museum and Center for Holocaust Education, it will be a work in progress.
Just as tikkun olam, repairing the world, requires ongoing attention, Bonnie Meltzer’s interactive fabric exhibit will evolve over its four-month run with several “mending bees” inviting visitors to help restore the social fabric.
Long a community activist and artist who uses found objects and fabrics, Bonnie turned her attention to America’s social fabric Jan. 20, 2017. As she listened to OPB while working in her studio that day, she heard speaker after speaker talk about the unraveling of the social fabric. In 2018, she had an exhibit in Hood River with a room full of artwork that focused on unraveling.
But she was more interested in mending. She began to keep a notebook of quotes, sayings, metaphors and her own thoughts about tikkun olam. She called OJMCHE Director Judy Margles and proposed an exhibit.
“There is much about 'Mending the Social Fabric' that fits into OJMCHE’s mission and I was intrigued from the moment Bonnie described her intention for the project,” says Judy.
Originally scheduled to open in October 2020, the emphasis was to have been on citizen action, voting rights and immigration.
“The delay in opening turned out to be constructive for Bonnie as she was able to expand the themes of immigration, voting rights and civil rights to include the pandemic and racial justice,” says Judy. “Engaging visitors by encouraging them to take part in mending the work – a riff on tikkun olam – is a fantastic metaphor and deeply rooted in our work at the museum."
Bonnie also added themes of isolation and safety nets – which is represented by the central feature of the exhibit. Bonnie had envisioned a large fabric with tears that people would help her mend. But a gift from an old friend added new depth and solved the problem of how to arrange such an exhibit. Kindra Crick gave Bonnie a supply drop parachute from 1943. The World War II parachute had been in the barn of her father-in-law, William A. Lanford, for decades.
“A parachute is a symbol of safety, it is insurance,” says Bonnie.
That symbolism combined with the enormous expanse of fabric solved her problem.
Another problem was also solved by a gift. Bonnie wanted to embroider her collection of sayings on the exhibit, but that would have been challenging on the parachute itself. When her friend Mary Dickson gave her 150 handkerchiefs Mary’s Aunt Evelyn had collected on her travels, those handkerchiefs became the canvas for the quotes.
Before COVID shutdowns and restrictions hit, Bonnie had scheduled 10 sewing bees for people to come and embroider a quote on each handkerchief. When gathering became impossible, she did most of the embroidery herself, but some friends picked up handkerchiefs and quotes and embroidered them at home.
In her notebook, Bonnie had written her thought that “Immigrants are a golden thread woven into the American tapestry.” To represent the contributions of immigrants, she began collecting fabrics from around the world. A post on Facebook brought in dozens of donations.
“Dozens of people gave me fabric from around the world, including fabric that was sent from Poland,” says Bonnie. “Dozens of people volunteered, dozens of people donated. I am so moved by all the people who helped me, and most of all the people at the Jewish museum.”

MENDING THE SOCIAL FABRIC
WHAT: Interactive fabric exhibit by textile artist Bonnie Meltzer. The core of the exhibit is a parachute with a 314-foot circumference displaying handkerchiefs embroidered with text that amplifies the mending motif.
WHEN: Oct. 7, 2021-Jan. 30, 2022
WHERE: Oregon Jewish Museum and Center for Holocaust Education, 724 NW Davis St., Portland
RELATED PROGRAMS:
Mending Bees: The museum will schedule dates (including Oct. 7, 9,10, 16,17) throughout the four-month exhibit when visitors can meet the artist and mend the tears. The parachute, a symbol of safety, has rips and tears; over the course of the exhibition, interactive community building happens as visitors mend the damage.
Zoom talk, Noon, Oct. 12: Bonnie will be in conversation with Rachel Seiger of the Denver Jewish Community Center and textile artist Eli West of Portland Textile Month.
INFORMATION: ojmche.org | 503-226-3600