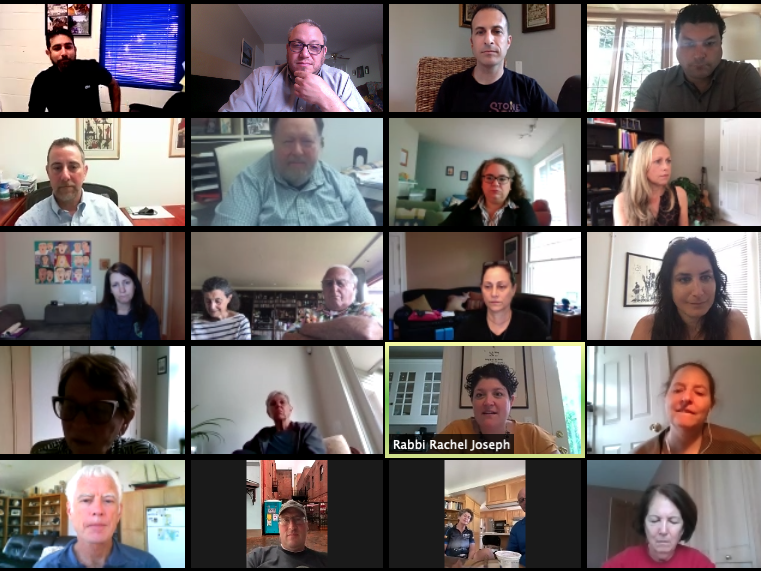 In a wide-ranging Zoom program on houselessness, three Jewish panelists shared how their organizations are helping build up the houseless community with shelter and jobs.
“We need to be able to build very, very affordable housing in Portland quickly and cost effectively and use evidence-based … counseling and resources,” said Andy Olshin, founder of Cascadia Clusters. “We have the opportunity to make investments in adult houselessness.”
The Mittleman Jewish Community Center hosted Houselessness Part II: Mensches in the Trenches on July 9 as part of its Zoom business series #PDXBIZ. Andy’s Cascadia Clusters builds tiny homes to provide housing for those in need and training for houseless individuals in a range of construction skills. Other panelists were Craig Gerard from Stone Soup and Nili Yosha from Outside the Frame. The conversation was moderated by Rabbi Rachel Joseph from Congregation Beth Israel.
Stone Soup has created a kitchen training program to help houseless individuals get off the street and learn valuable skills to work in the restaurant and hospitality industry. Outside the Frame trains houseless youth and adults to make films and work as a film crew. All three organizations have the goal of providing a hand up out of poverty, not a handout.
The panelists discussed the primary needs for the houseless population (shelters, showers and toilets), how to rebuild downtown, how their operations have pivoted during the pandemic and more. Each of the panelists reflected on their work and how their Jewish values and upbringings helped them to harness their passions to work toward building a better world.
Rabbi Joseph noted that houselessness is the root of the Jewish people – from expulsion from the Garden of Eden to wandering in the desert for 40 years to the quest for a safe place throughout history. So, she said, it’s no wonder Jews are drawn to aid the homeless.
Craig said part of the reason he works to make people’s lives better is so he will have an answer for his children when they ask, “What did you do?”
Born in Israel, Nili is the third generation in her family to use media to address issues of the day. When she moved to the United States, she was stunned by the number of homeless youth in America.
Watch the talk at youtube.com/ watch?v=rnh6JslX3aI&feature.
Starting in August, the #PDXBIZ Series will move to a monthly virtual format at noon on the third Thursday of each month. On Aug. 20 the series presents a panel of three food entrepreneurs for Build Your Biz + Eat it Too with Jessica Hilbert (Red Duck Foods), Val Roth (Mind Your Manna) and Jenn Topliff (Roons). The panel will be moderated by attorney David Forman. To learn more visit oregonjcc.org/pdxbiz.