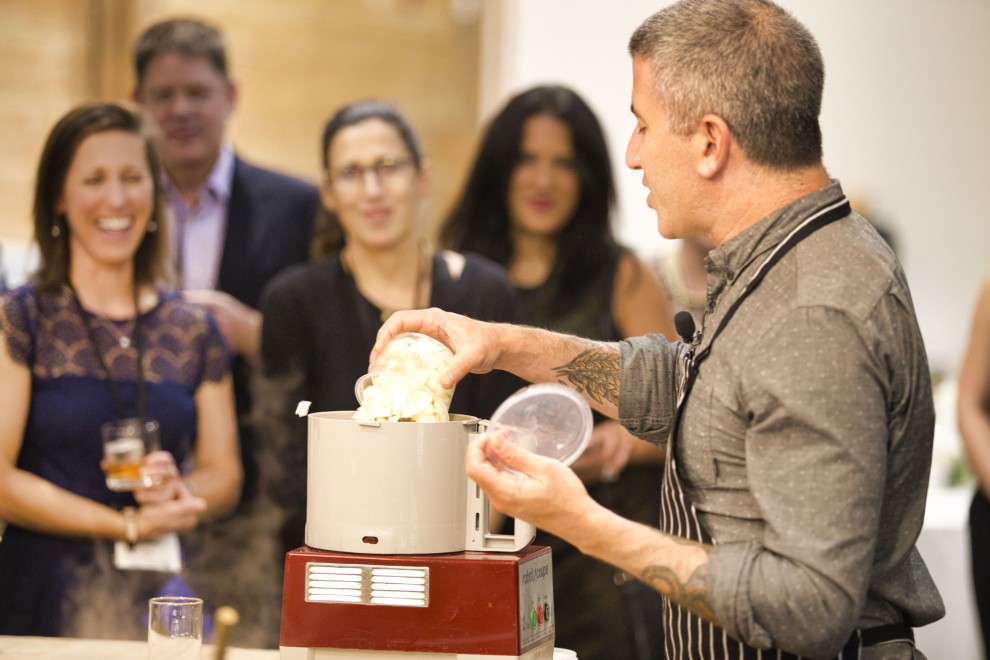 Renowned Philadelphia-based chef Michael Solomonov is no stranger to Portland. He has been featured several times at Bon Appétit Presents Feast Portland, and last year, he cooked up a special dinner for a Jewish Federation of Greater Portland donor event.
“I love Portland,” he says. “It’s an amazing city, and I wish I was there. Temperature-wise, the topography and the landscape, and from a culinary standpoint, it’s just so amazing, and the Pacific Northwest is perfect.”
Michael continues to forge links with the local Jewish and foodie communities. His modern Israeli restaurant, Zahav, served as a launching pad for chefs who went on to work at Portland’s Tusk, one of Food and Wine Magazine’s 2017 Restaurants of the Year.
In addition to operating Zahav, which was awarded “Outstanding Restaurant” by the James Beard Foundation, the chef co-owns several other eateries including Federal Donuts, K’Far, an Israeli bakery named for the chef’s hometown, and Merkaz, an Israeli pita shop. His most recent conception is Laser Wolf, an Israeli skewer house. Michael is also co-author of three cookbooks: In Search of Israeli Cuisine, Israeli Soul: Easy, Essential, Delicious and Zahav: A World of Israeli Cooking.
In 2018 Michael co-hosted a special Israeli-inspired Rosh Hashanah dinner in Pacific City as a guest of Feast Portland. Unfortunately, due to the coronavirus, the annual food festival had to be cancelled this year, and Rosh Hashanah celebrations are going virtual. However, due to a unique, first-time collaboration between Solomonov and Jewish Federation of Greater Portland, home chefs can feed both bodies and souls this year with an interactive High Holidays cooking presentation: “Rosh Hashanah Virtual Cooking Class with Michael Solomonov.”
In late June, Michael’s team approached various Jewish Federations to host this virtual cooking event. Due to cost, JFGP President and CEO Marc Blattner reached out to other Jewish Federations to see if they wanted to share in the event and make it possible for multiple communities to view the demonstration. In total, some 32 Jewish Federations from across North America will be sharing the event with an expected audience of more than  10,000 households.
The presentation will feature Michael, at home in his kitchen, preparing Sephardic dishes and a traditional dessert that is special to his family. Explains the chef, “My father’s side of the family is from Bulgaria, but they came from Spain originally. That was the sort of Jewish food that I grew up enjoying.”
During the cooking program, he will be using “sweet Shabbat- esque flavors with an ancient Spanish touch” by roasting a chicken with an onion and honey glaze. The accompanying sumac-onion tabbouleh with kale, apples and walnuts is a Zahav original. Finally, there’s a recipe that is dear to Michael’s heart: his late mother’s honey cake.
“The honey cake is straight-up my mom’s for Rosh Hashanah,” says Michael. “She would make it and freeze it and send it to us in the States from Israel – a very Jewish mother thing to do … crossing continents with honey cake. We put confit apples on top.”
Registrants will receive the recipes in advance so that they can cook along with Michael if they so choose. The chef invites participants to “cook or just watch and hang out.” He will be available for comments and questions.
When asked about his future plans, Michael says, “It’s so hard to talk about the new when it’s such a weird time, in general. It’s sad; I love Feast Portland. Hopefully (I’ll be there) next year. It’s still cheaper than a flight to Israel.”