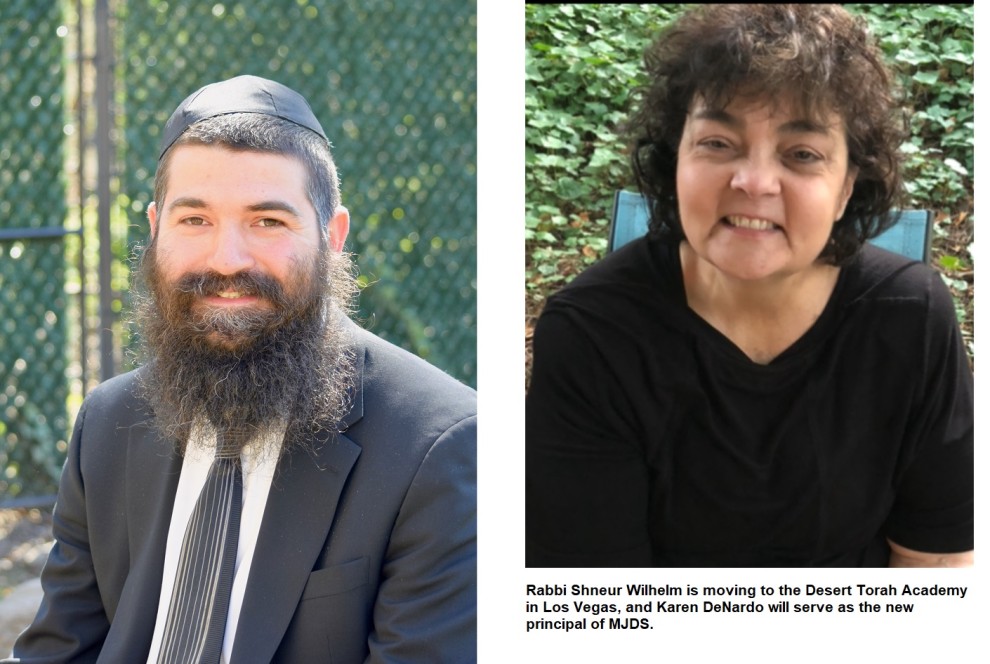 BY DEBORAH MOON
Maimonides Jewish Day School Principal Rabbi Shneur Wilhelm leaves Portland this summer to serve as vice principal of the Desert Torah Academy in Las Vegas, Nev., a school with more than 250 students.
Karen DeNardo will take the reins of Maimonides as principal this summer. (See related story below.) Devora Wilhelm will retain her title as school director and serve on the transition team.
A Portland native, Rabbi Shneur attended the predecessor of MJDS as a child after his mother Devora established it 36 years ago. He returned to Portland seven years ago to teach at MJDS. A year later, he became the day school’s principal. Rabbi Shneur was approached by Desert Torah Principal Rabbi Moshe Rodman about joining the school. Rabbi Shneur says Rabbi Rodman has been his mentor for several years, helping Maimonides navigate the path to accreditation. Rabbi Shneur will succeed him as principal after a year as vice principal.
Maimonides now serves students in kindergarten through 8th grade. During Rabbi Shneur’s tenure, MJDS became the first school in the Pacific Northwest to be accredited for both its Judaic and general studies programs; the school also introduced a Montessori-inspired curriculum. In addition, Maimonides joined the Legacy Heritage Better Together Program to established multi-generational programs at Cedar Sinai Park.
Jemi Kostiner Mansfield, now executive director of Congregation Shaarie Torah, was the CSP spiritual life director in 2015 when Rabbi Shneur approached her about building intergenerational social opportunities between Maimonides students and residents of CSP’s Rose Schnitzer Manor.
“What started as a loosely structured pre-Shabbat singalong in late 2015 became Torah & Us, a focused weekly parsha study created by the older boys, complete with audio and visual aids,” says Jemi. “The program continued to gain traction in 2016 and expanded to include Tea & Torah, where some of the female students brought homemade baked goods to share with the residents over a cup of tea and teaching. Eventually, challah-making emerged on the MJDS-CSP scene, cementing a strong and special relationship between the two organizations.”
“These programs would not have flourished were it not for Rabbi Shneur’s vision and encouragement to let the students lead,” says Jemi.
The past year offered fresh challenges. When COVID closed schools in March 2020, Maimonides pivoted quickly. Within four days, the school was providing online classes. MJDS obtained an emergency child care license and was able to have children on the campus while parents worked. The school also offered a wide range of extracurricular activities including a weekly virtual art class. You can see more highlights from the past year at mailchi.mp/portlandjewishschool/thank-you-for-a-great-year-2021-highlights.
The rabbi is proud of the culture that evolved during his seven years at the school.
“Our biggest achievement during that time is to create a culture that successfully executes the school’s mission of being a personal, meaningful and empowering Jewish day school,” says Rabbi Shneur.
“We adopted a social-emotional curriculum (based on Thinking, Feeling, Behaving by Dr. Ann Vernon),” he adds. “We had volunteers in the school every day for a lot of one-on-one instruction.”
One of those volunteers, Basha Necha Rothstein, says Rabbi Shneur makes volunteering at the school a pleasure.
“Rabbi Shneur’s sincere and genuine appreciation for the time volunteers contribute to Maimonides School is palpable,” says Basha. “From the moment the volunteer comes through the doors and is greeted with his cheerful ‘Hello’ and warm smile, to the moment in the day when we are asked if there’s anything he can do for us, we are constantly assured of the utmost value and honor he places on our work.”
Rabbi Shneur also has led a weekly “Kabbalah of the Soul” class since 2015. For the first four years, the class studied The Tanya, shifting from in-person to Zoom after COVID hit. After the in-depth study of the Tanya concluded Nov. 16, 2020, the class began a study of Gate of Trust. The class is posted online on Soundcloud (soundcloud.com/kabbalah-of-the-soul).
When the class finished its study of Tanya, participant Mark Berkowitz commented, “Learning Tanya with Rabbi Shneur was such an incredible foundational growth experience… The rabbi broke it down into bite-sized pieces so we would not be overwhelmed and taught in layman’s terms so we could grasp the depth and breadth of Tanya’s concepts and ideas.”
Rabbi Shneur says he hopes to continue the class after he settles into his Las Vegas post.

Farewell Event July 28
Rabbi Shneur, his wife, Chaya, and their children will move to Las Vegas the first week of August. The community will have the opportunity to say goodbye to the family at a gathering at 5 pm, July 28, at the school, 6612 SW Capitol Hwy.
RSVP to office@portlandjewishschool.com.

BY DEBORAH MOON
Karen DeNardo has been hired as principal of Maimonides Jewish Day School beginning with the 2021-22 school year. She succeeds Rabbi Shneur Wilhelm (see related story above).
Karen served as a principal in Wisconsin for nine years before moving to Portland in 2016 to join her two daughters, who moved here when one attended Portland State University.
For the past five years, Karen has worked at PSU as a university supervisor mentoring student teachers and serving as the link between the university and school districts. She had connected MJDS with two teachers in past years and was talking to Rabbi Shneur about a teacher for the coming year when he told her he was also looking for someone to replace him as principal.
Although Karen had not planned to seek another position as principal, she says she had missed “the interactions with a variety of people – not just students but the community and staff. It is such a rich career.” So she soon found herself talking to Rabbi Shneur and his mother, Devora Wilhelm, who is the school’s founder and director.
“I was drawn to be able to serve a community so rich in support for each other,” says Karen. “The closeness and support I see between various elements of the school … I love being able to add my energy to that mix.”
“She fits our mission of personal, meaningful and empowering – she puts students first,” says Devora.
When Devora called the Wisconsin district where Karen had worked, she was impressed by the lengths Karen had gone to ensure the students in her low-income school were ready and able to learn – including getting a washer and dryer for the school. “She really cares for children, and she understands education.”
Karen says she did many things to help students at the school where 98% qualified for free lunch, but jokes, “everybody always talks about the washer and dryer.” She says she was able to buy the appliances because for five years her school won an award (that included additional funding) as a school that beat the odds and racked up high standardized test scores.
“You have to meet the students’ needs so they can come and be ready to learn,” says Karen.
With the award funding, Karen also brought in trainers from the Comprehension Toolkit series developed by Stephanie Harvey and Anne Goudvis.
She says the school was able to exceed expectations on standardized tests because of the creativity her teachers used teaching reading standards using social studies and science. “We double dipped on time,” she says.
She expects to follow that same double-dipping approach at Maimonides. With both Judaic and general curricula to cover, she says the school is ideally suited to use those creative tools to teach multiple skills in one lesson.
For more information, email Karen at Karen@portlandjewishschool.com or visit portlandjewishschool.com.