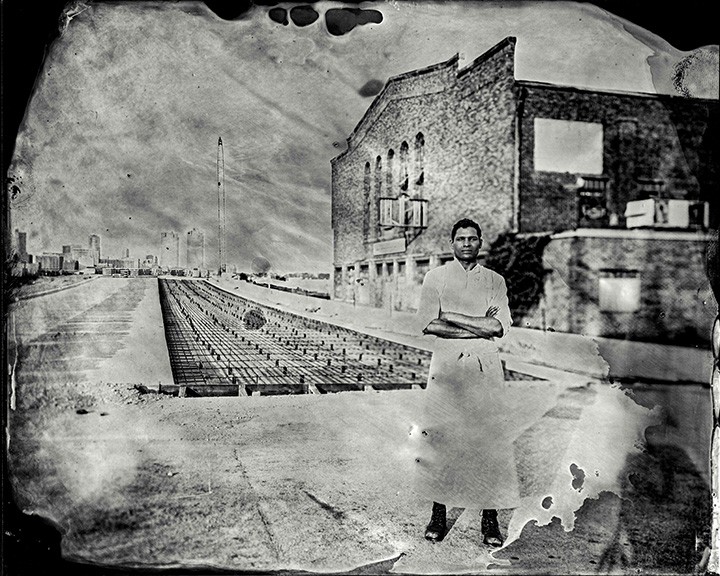 Photo: Social artist Adam W. McKinney dressed as 1921 Fort Worth, Texas, lynching victim Fred Rouse at sites associated with the lynching. “Because I could not locate any photographs of Mr. Rouse, I took it upon myself to ‘fill in the blanks’ and use my body as the canvas on which I would remember him,” McKinney says. The tintypes for the exhibit were made by Navajo photographer Will Wilson.

OJMCHE’s new exhibit Shelter in Place is a response to the two realities sweeping our nation – COVID-19 and protests against police brutality. Opening Oct. 1, the multimedia exhibit expands the museum’s contribution to the racial injustice conversation and does so with outdoor viewing. 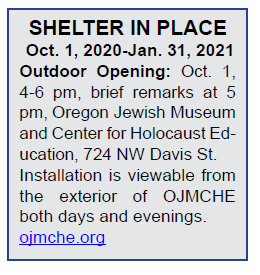 Social artist and activist Adam W. McKinney’s Shelter in Place is installed in the windows and first floor gallery of Oregon Jewish Museum and Center for Holocaust Education, but it is completely viewable days and evenings from the sidewalks outside the museum.
Though the exhibit explores themes similar to the United in Spirit project the museum co-sponsors, it is not part of that series of programs that explore the connections between the Black and Jewish communities.
“Rather it (the exhibit) is part of a national project – Dwelling in a Time of Plagues –  which was conceived to offer artists an opportunity to make new artworks for Sukkot and forge new connections between artists and museums,” says OJMCHE Director Judy Margles. “Artist Adam McKinney’s installation investigates the effects of anti-Black racial violence, posing questions about who gets to feel secure and safe, while also speaking to Jewish tradition.”
The Tucson Jewish Museum and Holocaust Museum LA also have created exhibits for Dwelling in Time of Plagues, and New York’s 14th Street Y is showing highlights from the national project through the windows of its lobby gallery. 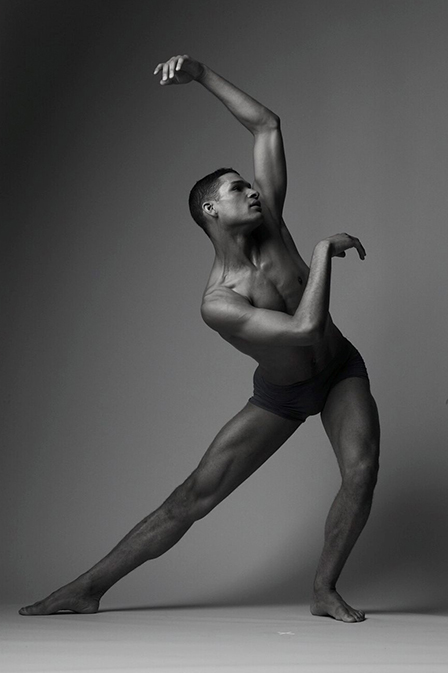 Opening on the eve of the Jewish holiday of Sukkot, the exhibit uses film, photography and dance to explore the social tenets of Sukkot – departing and dwelling, expressing and atoning, striking and shaking. The exhibit features contemporary tintypes of McKinney as lynching victim Fred Rouse; a mélange of hanging tree branches to reference the deconstruction of a sukkah; and two projected dance films – one of McKinney performing the story of Mr. Rouse in sites of trauma, and the other a hologram about the intersections of racism and anti-Semitism in the time of COVID-19.
The exhibition will be worth seeing in the daylight and in the evening as the videos and hologram will look different depending on the light.
“We are most grateful to the support of the Council of American Jewish Museums, Asylum Arts and CANVAS for creating this unique opportunity to turn the museum ‘inside out’ with this exhibition that is relevant both in content and accessibility,” says Judy.
This exhibit expands on the museum’s summer window exhibits, which included a tribute to the late Sen. John Lewis, Discrimination and Resistance, Land Acknowledgement, and sculptures by Mel Katz.
“I’d like to think that with our activation of the windows for exhibitions and chalking the vote on the sidewalk, we have been able to stay true to our mission and make significant contributions to conversations about racial justice and about nurturing our souls through beautiful and meaningful art work,” says Judy. “I’ve heard from a number of people who tell me that they visited the museum and loved the exhibitions. I always do a double take, since the museum itself is closed. I have to remember that people are making the trip to the museum to walk around the perimeter.”
Asylum Arts recommended McKinney as “the perfect match” for OJMCHE in the national project. After meeting the artist on Zoom, the OJMCHE exhibition committee was enthusiastic with his proposal, says Judy.
McKinney’s parents, one of African and Native American heritages and one of Eastern European Jewish heritage, were married in July 1964 – three years before the Supreme Court struck down state laws banning interracial marriage. McKinney says, “I was raised in an environment where being of mixed heritages was not an anomaly, nor a contradiction. … Rather than a severed, percentaged representation of any one of my heritages, I was taught that I am 100 percent of all of my heritages, or, as is said in Lakota, Mitákuye Oyás’i – a reflection of ‘all my relatives.’ ”
McKinney graduated from Bader Hillel Academy in Milwaukee, Wis., and earned his bachelor of fine arts in dance performance from Butler University and a master’s degree in dance studies with concentrations in race and trauma theories from New York University’s Gallatin School of Individualized Study in New York City. He lives with his husband, Daniel Banks, in Fort Worth where he is an assistant professor of dance at Texas Christian University.
“I often think about my role as an artist to bring awareness to the impact of oppression and to the vestiges of historical trauma,” says McKinney. “I am interested in what might be on the other side of the trauma – and I think it might be each other.”