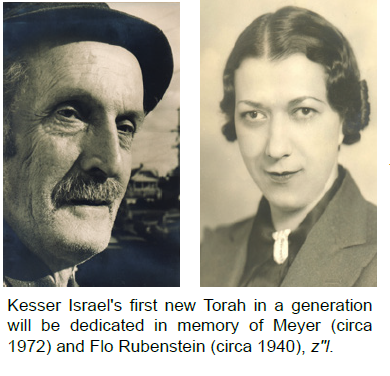 Sunday, Jan. 9, will be a time of celebration – the completion and dedication of a new Torah scroll.
Everyone in the Portland community is invited to join the festivities at the Mittleman Jewish Community Center and watch the scribe as he writes the last letters of the Torah (see below). The completion of the final word of the Torah will be followed by a procession to nearby Congregation Kesser Israel, where the new Torah will take its place in the Aron Kodesh.
For Kesser Israel, the celebration is an important milestone: It is the congregation’s first new Torah in 20 years.
For me, and for my family, it’s especially meaningful, because the Torah is being dedicated in memory of my parents, Flo and Meyer Rubenstein, z”l.
Our sponsorship was sparked by a conversation my husband, Rick Haselton, and I had just before Rosh Hashana in 2020. We had read an essay by Rabbi Jonathan Sacks, z”l, on Parshat Vayelech, the parsha in which G-d commands Moses to “write down this poem and teach it to the people of Israel; put it in their mouths” –  a command considered the 613th mitzvah, the final mitzvah in the Torah.
As we spoke, Rick said, “Why don’t we donate a Torah in memory of your parents?”
In his writings, Rabbi Sacks often described every Jew as a “letter in the scroll,” explaining that, just like the letters in a Torah, each individual Jew is an essential part of the Jewish people.
Dedicating the Torah in memory of my parents is a tribute to that teaching. Flo and Meyer were what Flo would call proste Yidden – “plain” or “simple” Jews. Nothing fancy. Just regular folks.
Both had immigrated from Poland as children with their families. They worked hard, Flo as a fry cook in a neighborhood Italian restaurant, Meyer as a baggage handler at the Greyhound Bus Depot downtown.
They didn’t have much in the way of material things. What mattered to them was how they treated people, whether it was putting a quarter in the cup of a disabled veteran or insisting that every drop-in visitor have a cup of coffee and a cookie. Being a mensch.
And Kesser, then “the Meade Street Shul,” half a block from their home in South Portland, was always a part of their lives.
“This is really G-d’s little house of worship,” Flo said in an oral history interview for the Oregon Jewish Museum and Center for Holocaust Education.
Over the years, Meyer would always help make a minyan, as would Flo’s brothers, Harry and Izzy Steinberg. In later years, Meyer became the shammes – the sexton – of the shul, opening the doors for services and closing up afterwards. When he was no longer able to do so, Flo’s sister Rose Steinberg, and then their brother, Izzy, took over.
Today Kesser is no longer on Meade Street, and the community has grown in many ways. But the bedrock is still there, and G-d willing, will remain there for years to come – a community of people taking the Torah into their hearts and living out its precepts in the best ways they can.
Both Rick and I had been deeply involved in Kesser’s 2001 Torah campaign, made possible through the generous support of Peryl Gottesman, z”l, and her sister, Sylvia Gold, z”l. And we knew how important that Torah has been to the congregation.
We are grateful to HaShem for enabling us to do this mitzvah, which we dedicate to the spirits of Flo and Meyer Rubenstein, to those of Harry, Rose and Izzy Steinberg, and to all who have helped build, and continue to build, our Jewish community.
And we welcome everyone to join in the joyous celebration of Kesser Israel’s new Sefer Torah.
Aviel Brodkin, Kesser Israel’s director of community engagement, is organizing the Sefer Torah Celebration and invites all to join in the “community mitzvah.”
“We are joining together, each of us dedicating part of this new, life-giving Torah, a generational inheritance,” she said. “Kids, adults and people of all backgrounds will participate in the last mitzvah in the Torah. What a simcha!”

SEFER TORAH CELEBRATION
Join Congregation Kesser Israel as it celebrates the completion of a new Sefer Torah.
Sunday, Jan. 9
Mittleman Jewish Community Center
Free – All Ages Welcome
3:30 pm: Observe the Sofer (scribe) as he writes the last letters of the Torah. Open house with kids’ crafts, activities and light refreshments.
4:30 pm: Program begins with completion of the final word of the Torah, followed by a procession to Kesser Israel.
5:15 pm: Special ceremony as the new Torah takes its place in the Aron Kodesh (ark).
For more information about the event, or to sponsor part of the writing of the Torah: sefertorahpdx.com