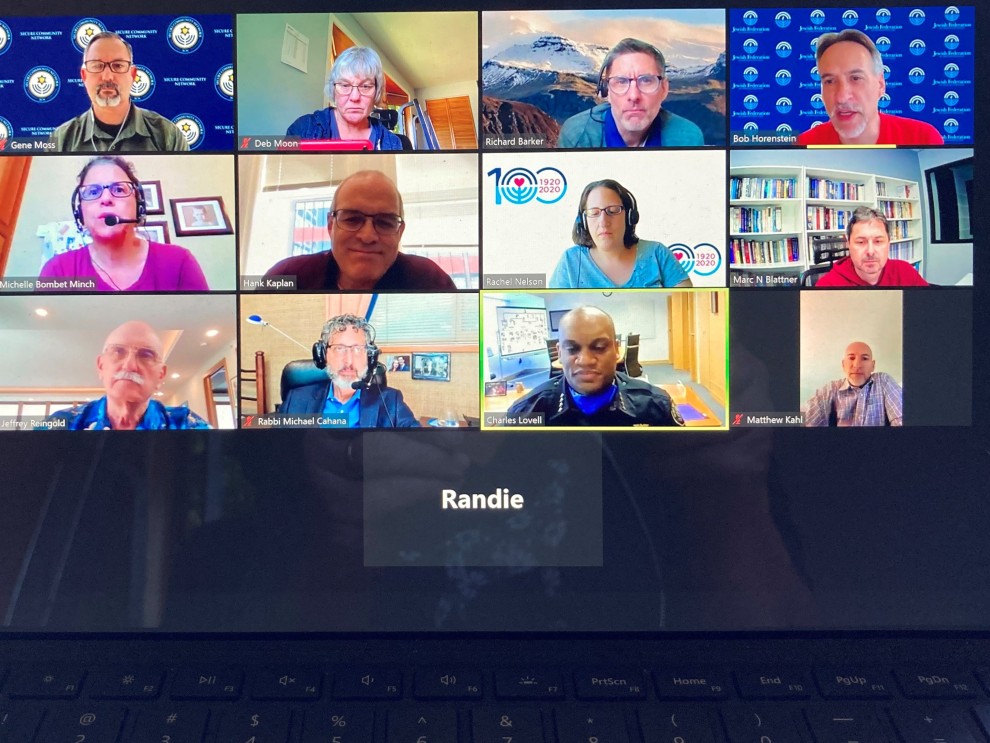 A month after he was unexpectedly sworn in as Portland’s police chief, Charles Lovell told a Zoom gathering that his goal is “to help put the community and police bureau back together … and give some healing and some hope.”
The July 13 virtual gathering was organized by the Jewish Community Relations Council of the Jewish Federation of Greater Portland as both a mutual introduction and to ask the chief about his vision of reforming or reimagining the police bureau. Lovell, the department’s fourth Black chief, succeeded Jami Resch, who resigned after six months on the job and asked the 18-year PPB veteran to succeed her.
Community Relations Director Bob Horenstein told Lovell the Jewish community long has had a positive relationship with the Portland police, but recognizes Black and other minority communities with whom the JCRC collaborates have “issues that need to be remedied.” 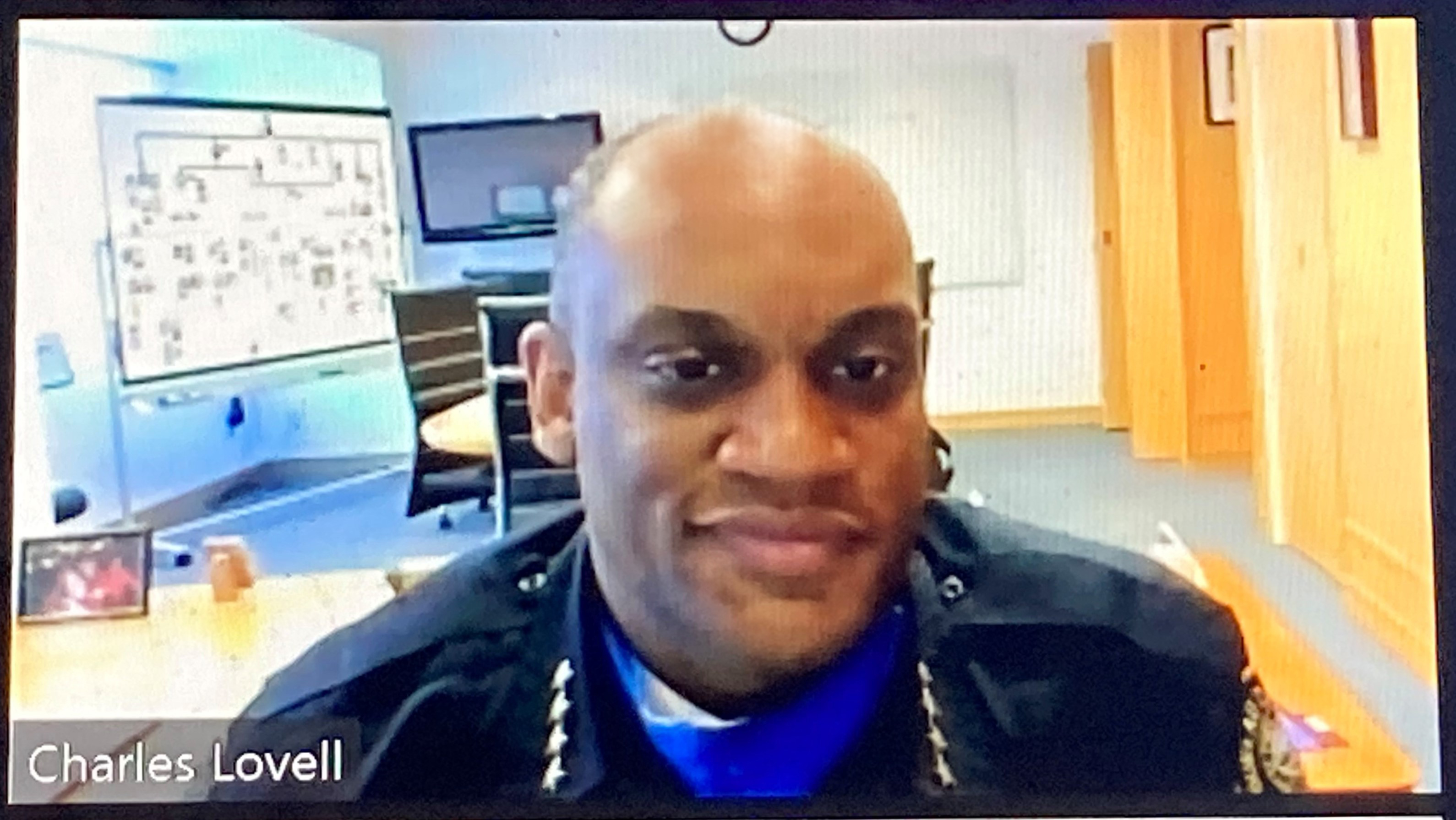 “There are definitely changes coming to policing,” Chief Lovell told about a dozen Federation and JCRC representatives.
Less than a week after Lovell was sworn in, the Portland City Council voted to cut PPB’s budget by $15 million to eliminate four tactical units, cutting perhaps 84 positions in an already understaffed police department.
"I hope it (funds) goes to upstream things that make a difference in people's lives," he said.
Lovell said the cuts will force the department back to a patrol-based model, which he supports as a long-time believer in community policing. Returning to small groups of officers assigned to teams in districts or neighborhoods “ties officers to communities in unique ways,” he said, adding, “That will help us build more trust.”
“The more we understand each other, the better we can work through issues. I want to make sure what we do in Portland is thoughtful, sustainable change to lead to better outcomes for people.”
Federation board member and attorney Hank Kaplan asked Lovell which of the six criminal justice bills recently passed by Oregon legislators will make his job harder and which easier.
Lovell said the temporary restraining orders against tear gas are problematic. “I don’t want to use that tool against members of the public,” he said. “But to disperse large crowds, that is most effective.” Without that option, he said he fears a small number of police officers coming face to face with a large angry crowd may have to use batons and hit people, causing greater injuries on both sides.
He said the bill making it a duty for officers to intervene when they see misconduct by a fellow officer is “a good concept … (that) makes a lot of sense.” And while he wants to implement training to encourage such intervention, as a policy it is challenging. Even the police chief can’t just make a decision, there are city attorneys, unions and bargaining pieces that are moving parts of the policy.
Regarding the ongoing protests, Lovell differentiated between “changemakers” and those who damage property. He praised the thousands who in the initial nights of the protests gathered at Revolution Hall and parks and marched to promote the changes they hope to see. He said the 300 or so people who protest nightly downtown include some intent on damage and engaging officers – actions that he said “take away from time we could be spending on police reform.” He added that the rock throwers are hard to arrest because a bunch of semi-peaceful protesters stand in front.
JCRC members spoke with different views on the ongoing nightly protests downtown. Doug Blauer, who knows a business owner whose building was destroyed, and Jeff Reingold, who is in the property management business, lamented the destructive forces. On the other hand, Rabbi Michael Cahana warned that “people who are there peacefully become more radicalized when they are tear-gassed.”
“I’ve been among the crowd of 300 … in the people standing in front trying to keep things peaceful,” said the rabbi. “It’s very difficult. … People with different agendas are there.”
Rabbi Cahana then asked the chief about a few policies including federal officers in Portland (see story below) and his predecessor allowing officers to hide their names.
Lovell said that decision was made in the early days of protests when protesters coming face-to-face with officers would read their names on their name tapes and then google them; some officers received threats and some family members were called while the officers faced off with protesters.
In the interest of both safety and transparency, the department has ordered name tapes in a standardized size and font that contain the officer’s personal ID number rather than a name.
Lovell acknowledged that changes need to be made in policing but emphasized that the problems in society go far beyond police departments. “If we are going to seize this moment in society to make some meaningful change … we have to be looking at all facets of our system and society that contribute to it.”

Federal officers deployed to quash protests in Portland became national news in mid-July as tensions soared and protests saw their largest numbers in weeks July 17 and 18.
President Trump said he sent officers to Portland because “the locals couldn’t handle it.” Protests have escalated in response.
“I don’t have any control over their ability to be here in Portland or their tactics,” said Portland Police Chief Charles Lovell on July 13 in a Zoom meeting with Jewish leaders (see main story). “They are here on their own accord to protect federal property … (they) are not under our command or control, and they don’t operate by the same rules of engagement.”
Now leaders in the state have taken steps to send the federal officers home – a nightly chant of protesters.
Sen. Jeff Merkley tweeted he and Sen. Ron Wyden will introduce an amendment to prevent “paramilitary squads” from being sent to America’s streets. Oregon Governor Kate Brown and Portland Mayor Ted Wheeler have called for federal agents to leave Portland.