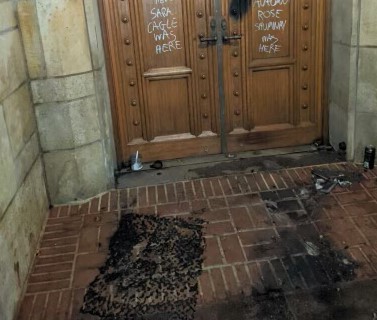 Fire investigators from the Portland Police Bureau and Portland Fire and Rescue are asking for the public’s help investigating a suspicious fire at a building on the grounds of Congregation Beth Israel in Northwest Portland.
“There is no indication that this was an anti-Semitic event,” says Rabbi Michael Z. Cahana, senior rabbi of the Reform congregation.
A statement on Beth Israel’s website notes, “There have been reports in the media about a small fire set outside the sanctuary on New Year’s Eve. The damage to the side sanctuary doors was minor, and there is currently no indication of anti-Semitic intention. The investigation is ongoing, but the initial sense is that it was a small fire set by trespassers for their own use. It is unlikely the intent was to do damage. It was careless, but probably random.”
A press release from the Portland Police Bureau details the event: On Wednesday, Dec. 30, 2020, at 9:10 pm, Portland Fire and Rescue responded to a call of a fire to a door of a Jewish education building in the 1900 block of Northwest Flanders Street. After the flames were extinguished, fire investigators responded and determined the fire appeared to be intentionally set. While we have no information that this is related to anti-Semitic or any other bias-related activity, it is nevertheless concerning that a fire might have been intentionally set near a place of worship.
If you have information about this case, contact PPB Detective Meredith Hopper at Meredith.Hopper@portlandoregon.gov, 503-823-3408, or PF&R Fire Investigator Lieutenant Jason Andersen at Jason.Andersen@portlandoregon.gov, 503-823-3797.
In addition, Crime Stoppers of Oregon offers cash rewards of up to $2,500 cash for information reported to Crime Stoppers that leads to an arrest in any unsolved felony crime, and tipsters can remain anonymous.
Visit the App Store and download P3 Tips or go online at p3tips.com/823 to submit secure and anonymous tips.
Crime Stoppers of Oregon is funded 100 percent by community donations. To support Crime Stoppers with a donation, please visit http://www.crimestoppersoforegon.com/