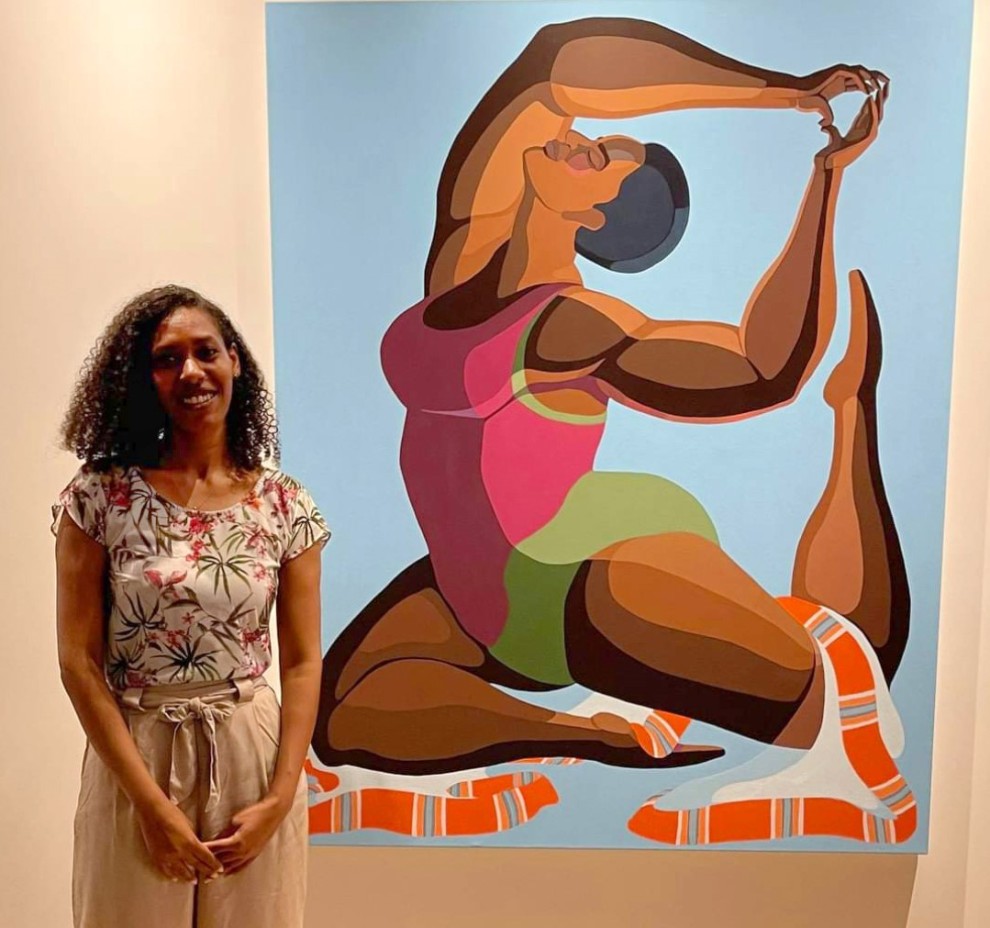 PHOTO: Nirit Takele was only 6 years old when she was one of 14,300 Ethiopian Jews who were airlifted on 35 aircrafts from Addis Ababa (Ethiopia’s capital) to Israel in less than 36 hours. Steve "Rosy" Rosenberg, who was board president of Portland's Jewish Federation at the time, recently purchased one of Nirit's paintings. Below, Rosy and his wife, Ellen Lippman,  hosted the now famous young artist for a Shabbat dinner in Tel Aviv.

BY DEBORAH MOON
Thirty years ago, Steve “Rosy” Rosenberg was board president of the Jewish Federation of Greater Portland as Federations worldwide raised millions of dollars to help airlift nearly 15,000 Jews from Ethiopia to Israel.
This month, he and his wife, Ellen Lippman, hosted one of those evacuees for Shabbat dinner in Tel Aviv.
“Nirit, who came to Shabbat dinner by us this month, was 6 years old when she boarded one of those flights,” says Rosy. “Last year, she was named Israel’s best young artist and now appears in exhibitions around the world. It took us two years to convince her to sell one of her paintings to us. We were honored to have her share her story and art with us on this historic Shabbat.”
Jewish Federation of Greater Portland President and CEO Marc Blattner recently shared about the 30th anniversary of Operation Solomon in his weekly Marc’s Remarks email.
In his column, Marc wrote: “What is less widely known is that at the last-minute American Jews (including through our Jewish Federation) raised $35 million to cover the (ransom) payment demanded by the Ethiopian government to allow the Jews to leave the country.”
The speaker at that Federation dinner 30 years ago was to have been Senator Rudolph Ely Boschwitz, who had just finished negotiating that deal with the Ethiopian president for the bribe.
“Unfortunately, he canceled because he was busy working on the deal,” says Rosy.
Hearing Nirit’s story now was inspirational and an honor, he adds.
“Nirit served in the IDF at a border crossing,” he says. “When she told the story, she broke down in tears remembering the death of her friend, who was killed in a terror incident at the crossing. After the IDF, she got a menial job at a factory putting buttons on clothes. One day when she passed Shenkar (School of Engineering and Design near Tel Aviv) – Israel’s premier college for the arts along with Bezalel (Academy of Arts and Design) – she decided she wanted to go there. Within weeks, she put together a portfolio to present to administrators for admission.  She had very little formal art training. She talked her way into a full scholarship and some money to live on … And the rest is history.”
Nirit’s story from Ethiopia to international acclaim is told in depth in an April 2019 article in Haaretz (haaretz.com).
The article relates: “In 2016, when she was 30, she completed her studies and her star began to rise. About 10 months later, her painting 'Mikveh' was acquired for the Israel Museum. The work explores an experience described by an Ethiopian immigrant in a documentary in which she was forced to immerse in a ritual bath under the withering eye of Orthodox rabbis who doubted her Jewishness.”
The Haaretz article calls Nirit one of the biggest successes in the younger generation of Israeli artists with Ethiopian roots.
“This personal story showcases the incredible work of the Jewish Federation system,” said Marc after seeing Rosy’s post about Nirit on Facebook. “We truly are responsible one for each other. And, even more so, one never knows the incredible future talents and achievements of those we may save.”