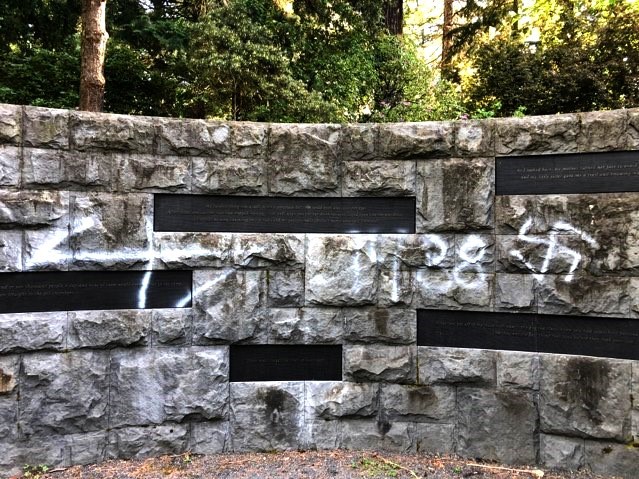 PHOTO: The Oregon Holocaust Memorial was marred by Nazi graffiti May 1 or early May 2. The graffiti has been removed, but it was a reminder hate continues.

The Oregon Holocaust Memorial in Washington Park was defaced with Nazi graffiti on May 1.
“To use Nazi symbols to deface a Memorial dedicated to the millions who were murdered during the Holocaust recapitulates the hatred that drove the original genocide,” says Judy Margles, director of the Oregon Jewish Museum and Center for Holocaust Education, which is the steward for the Memorial.
“Portland police are vigorously investigating the crime incident and are currently reviewing all the evidence,” says Regional Security Director Gene Moss, who is based at the Jewish Federation of Greater Portland.
Just a month earlier, community leaders and elected officials, including Portland Mayor Ted Wheeler, gathered at the memorial for the annual Reading of the Names on Yom HaShoah, Holocaust Remembrance Day. This year, participants read the names of local survivors’ family members who were murdered in the Holocaust and are etched on the Memorial.
“The defacement of the Memorial affected all of us deeply and viscerally,” says Judy.
“Unfortunately, with anti-Semitism on the rise in our country, are we surprised?” asks JFGP President and CEO Marc Blattner.
Community support has been swift. On May 4, Mayor Wheeler called Blattner to express support for the Jewish community. And many have reached out to OJMCHE.
“We have been considerably heartened by the outpouring of support from museum friends, colleagues and concerned community members,” says Margles. “Shocking, disheartening and sickening are a few of the anguished words that we have received. But we’ve also been buoyed by the messages of hope, and it is, of course, the Memorial itself that offers us the most hope.”
The vandalism occurred during Jewish American Heritage Month. A proclamation from the White House the same weekend as the vandalism articulated the incredible contributions Jews have made to our country, but it also noted: “Alongside this narrative of achievement and opportunity, there is also a history – far older than the Nation itself – of racism, bigotry and other forms of injustice. This includes the scourge of anti-Semitism. In recent years, Jewish Americans have increasingly been the target of white nationalism and the anti-Semitic violence it fuels.”
OJMCHE continues to teach the lessons of the Holocaust, to host difficult conversations and to shed light on the roots of hate. The graffiti is gone, and the Oregon Holocaust Memorial continues to honor the memory of those murdered in the Holocaust. While the pandemic has eliminated in-person group tours of the memorial, OJMCHE has created a virtual tour to share the Memorial’s message. Take the virtual tour at  ojmche.org/teach-learn/oregon-holocaust-virtual-memorial-tour.
“The Memorial stands as a reminder to visitors why this can never happen again,” concludes Margles.