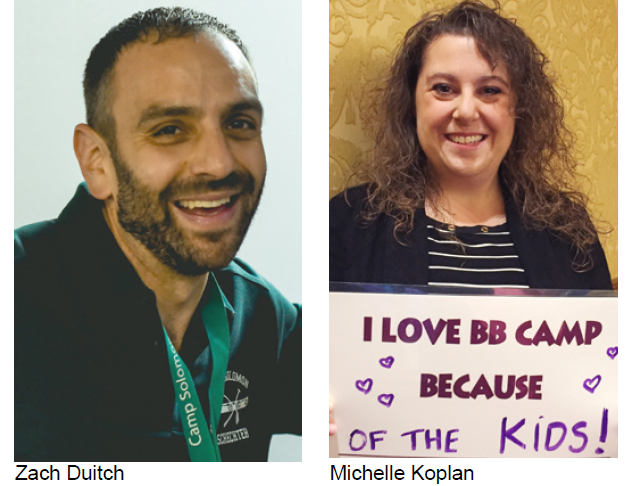 Overnight camps in Oregon and Washington will be allowed to open this summer thanks in large part to the efforts of two Jewish camp leaders.
B’nai B’rith Camp CEO Michelle Koplan serves as chair of the Alliance of Oregon Camps, and Camp Solomon Schechter Executive Director Zach Duitch is co-chair of the Washington State Camp Coalition. Both groups were formed in response to the pandemic, which forced the closure of overnight camps in both states last summer.
Oregon Governor Kate Brown announced on March 17 that Oregon’s overnight camps will be allowed to open and operate in 2021. The Alliance submitted recommended guidance, which proposes stable cohorts of up to 20, to the Oregon Health Authority on March 19. The Governor’s office will release guidelines by mid-April.
Washington Governor Jay Inslee has released guidance secured with the assistance of The WSCC that allows overnight summer camps to operate safely this summer. The guidelines are part of the governor’s COVID19 Outdoor Recreation Guidance update released March 23. The guidance sets a maximum cohort size of 16, which should remain consistent for both daytime activities and sleeping in bunks/cabins/campsites together. Facial coverings are required to be worn at all times by all staff and campers, and anyone else present at the camp, except for when eating, drinking, brushing teeth, sleeping or specific outdoor activities.
The Alliance of Oregon Camps is an organized group of American Camp Association, Christian Camp and Conference Association, and all licensed Oregon overnight camps.
“As our state began to shut down last spring, I had the opportunity to be actively engaged with the Governor’s Office and the Oregon Health Authority to prepare and submit the COVID-mitigating guidance necessary to open Oregon’s summer camps,” says Michelle. Though overnight camps were not allowed in 2020, “the relationships made translated to the convergence of a coalition of Oregon’s camps and my continued work with the Governor’s Office and OHA.”
The primary priorities were to secure state funds to support camps’ operations and advocate for a regulatory framework (guidance) that allows overnight camps the ability to open and operate as fully as possible. The Alliance has been successful on both fronts.
“After meeting with many stakeholders and legislators, in late December, the State of Oregon’s Early Learning Division called us to share that they were releasing $1.5 million of CARES Act funds to Oregon’s overnight camps,” says Michelle. “In early January, the State’s Joint Emergency Board approved $10 million to be allocated from state appropriations to Oregon’s youth summer camps and programs.”
Michelle says the news of camps opening this year has been greeted with joy and relief by camp staff and camper families.
“A number of families shared that when they received our email announcement regarding the opening of BB Overnight Camp, there was singing, dancing and loud cheers in their homes,” says Michelle. BB Camp creates joyous and meaningful Jewish experiences for our campers and our community, and everyone is excited to come back home!”
The WSCC is the collective voice of Washington State resident camps that are advocating at the state level for the camp industry. It was founded in the fall of 2020 by Zach and Camp Beausite Northwest Executive Director Raina Baker.
“We’re so appreciative that Governor Inslee and the Department of Health embraced our science-driven approach to address the safety of our campers as we collaborated with the state and put forward a blueprint to return to overnight camping in Washington,” says Zach. “We brought a team of experts … to help us formulate a plan that works for Washington and complies with CDC standards.”
“The Jewish community should be proud that the directors of two Jewish overnight camps were the leaders in the statewide efforts to open all overnight camps in Oregon and Washington,” says Marc Blattner, president and CEO of the Jewish Federation of Greater Portland.
“Zach has demonstrated true leadership and advocated for all 145 overnight camps and their camp families,” says Schechter Board President Mark Kalenscher. “Zach and the WSCC Steering Committee crafted a solution that works for small camps as much as it does for larger programs, and Schechter’s Board is so proud of Zach’s initiative and commitment to the entire camp community.”