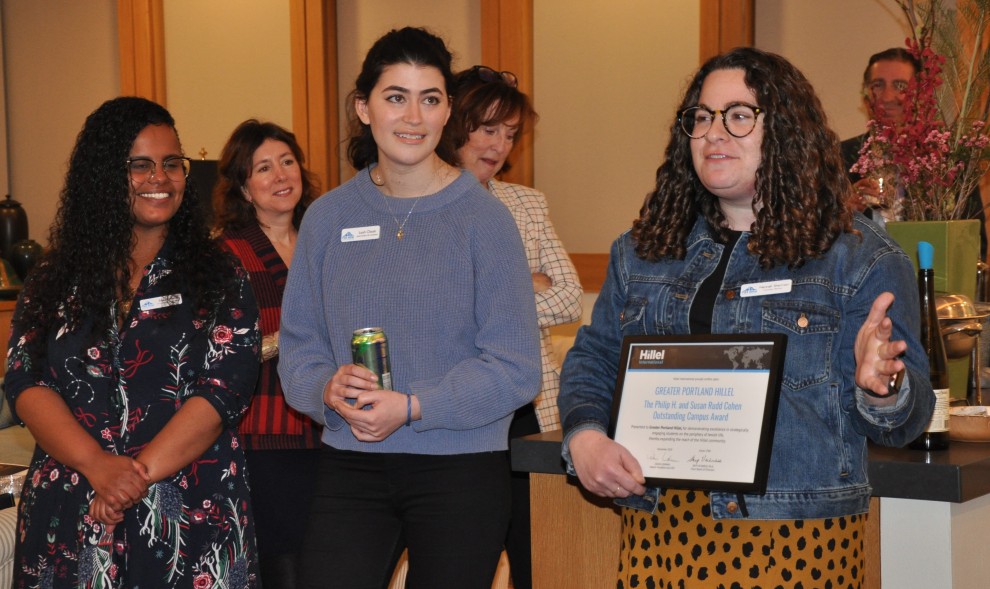 BY DEBORAH MOON
The Greater Portland Hillel celebrated winning Hillel International’s Outstanding Campus of the Year Award and presented its own Future Leader Award to Cole Keister at the 2020 Celebration Dinner hosted by PDX Hillel Ambassadors Feb. 25.
“This Hillel chapter was awarded the number one top chapter the country – not in Oregon, in the country,” Jeff Nudelman told a cheering gathering.
PDX Hillel received the chapter’s Philip H. and Susan Rudd Cohen Outstanding Campus Award at the Hillel International: Global Assembly 2019 in Atlanta Dec. 12.
Hillel International Campus Support Director Jay Lewis told the 36-40 people in attendance that the chapter received the award for the number of students it has engaged and its dramatic growth last school year. Even more impressive, said Lewis, “This year has already surpassed the numbers of last year, and it’s only February. Portland has become a destination for students who want a vibrant Jewish campus community.”
From spring 2019 to February 2020, PDX Hillel engaged 541 students at Portland State University (where the chapter has its office), Lewis & Clark College, Reed College and the University of Portland. Lewis credited the growth to the excellent staff and “the force of nature that is (board chair) Debbie Plawner.”
Lewis said PDX Hillel achieved that while facing three of the biggest challenges a Hillel can have: multiple campuses, an urban school where most students live off campus and an anti-Israel atmosphere on campus.
Helping to fight that third challenge propelled Cole Keister to become the chapter’s first Future Leader Award recipient. Keister is a senior at PSU majoring in graphic design.
Receiving the award, Keister said he got “whiplash” moving from the small community where he grew up experiencing openly right-wing anti-Semitism to a campus where the BDS movement had created a climate of anti-Semitism from the left. Keister said he grew up with very little Judaism outside the home and didn’t know about Hillel when he arrived at PSU. But the anti-Semitism inspired him to visit Israel on birthright, where he met many people from Hillel. After the trip, he designed his first poster for CHAI, the Cultural Historical Association for Israel. On a Hillel Fact Finders trip that took 23 Jewish and non-Jewish students to Israel and the Palestinian territories to explore the complexities and nuances of the Middle East, he met leaders from several other campus groups. As a result, Hillel partnered with the Association of African Students on campus to present an Ethiopian Night on campus. Hillel brought an Ethiopian Israeli to speak; this year, Hillel repeated the program with PDX Hillel’s Israel Fellow Eden Ferede sharing her story as an Ethiopian Israeli.
PDX Hillel Executive Director Hannah Sherman told Keister, “You played an important role in changing Jewish life on campus.”
PDX Hillel leaders Nudelman, Josh Frankel, Jeff Reingold and Rob Shlachter hosted the celebration in Reingold’s home. Shlachter offered a $5,000 grant to match all contributions to PDX Hillel through March 15; the offer was doubled by Carol Danish for a total $10,000 to match gifts in the next few weeks. To donate to help meet the match, go to pdxhillel.org/donate.